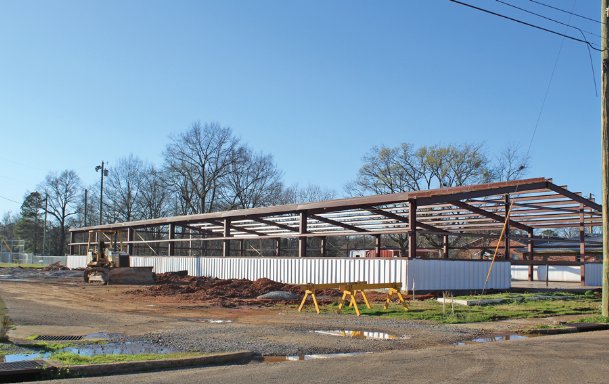 The frame of the new 9,000-square-foot community center at Sim Scott Park is in place, and Mayor Robert Smith expects the building to be complete this year. The park was devastated and former community center destroyed in an EF-3 tornado that hit Columbus a year ago today. Precision Metal is rebuilding the new center. Photo by: Isabelle Altman/Dispatch Staff 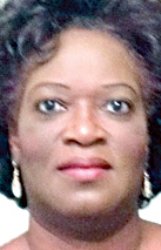 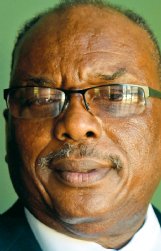 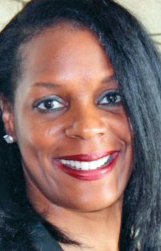 A rendering shows how the completed Sim Scott Community Center should look once it is finished.
Photo by: Courtesy image

Lowndes County was under a tornado watch that Saturday afternoon, and as director of the county's Emergency Management Agency, Lawrence was at her downtown office at about 5:15 when the EF-3 tornado first touched down.

For those downtown, the storm seemed like only heavy rain and wind. At first, based on some of the calls Lawrence received -- roof damage and shingles blown off -- she thought that was all it was as well.

Then more calls began coming in. Power lines down. Trees on houses. People trapped in buildings.

The thing that stuck with her most was the location some of the calls came from.

It wouldn't be until the next day that she would realize the street where she'd grown up, along with dozens of other streets and homes in Columbus, were left devastated by the storm.

"When I actually arrived in the area, and to see especially some of the senior citizens that I grew up around and I knew and to see the total devastation and the look on their faces, it was very disheartening," she said. "Because I knew them all personally. I've been in their homes, I've stayed in their homes. We were very, very close knit, the community I grew up in. ... They all had to move out of their homes because their homes were destroyed."

Mobilizing after the storm

The tornado touched down in the southwest part of the city and gathered strength as it moved northeast through downtown and into Memphistown, damaging or destroying residences in one of the poorest parts of the city. It kept moving toward Highway 50, where it devastated businesses around the intersection of Gardner Boulevard and Tuscaloosa Road. It weakened just before reaching the Alabama line about 10 miles total with winds reaching 137 miles per hour.

The claimed two lives: Ashley Glynell Pounds, 41, of Tupelo, who was one of four people in a building that collapsed on Tuscaloosa Road, and, five days later on Feb. 28, Donald Charles "Donnie" Schippel, 77, of Columbus, who died after falling from the roof of a home he was helping repair.

In the hours after the storm, Lawrence and other officials began responding to one emergency after another, deploying first responders to aid citizens in need and road and utility crews to clear roads of debris and power lines. Officials from Mississippi Emergency Management Agency were also in Columbus within hours.

Other agencies in the area also immediately reached out to help.

"I was amazed at the quick service ... from your local fire departments," Columbus Mayor Robert Smith said. "Starkville Fire Department came and assisted, (Mississippi Highway Patrol), the county. Harry (Sanders, president of the Lowndes County Board of Supervisors) called and told us whatever we needed, just let Ronnie Burns, the road manager know, and so they started immediately helping us remove trees and debris out of the main thoroughfare. And Columbus Light and Water department was out on top of things also."

Columbus Municipal School District Superintendent Cherie Labat was out of town when she received word of the damage to Hunt Success Academy on 20th Street North -- the roof and 12 upstairs classrooms destroyed and water damage throughout the building.

Since Labat taught on the Gulf Coast during Hurricane Katrina, she said, she had some experience with dealing with natural disasters. She moved the 25 students at the Success Academy to Columbus High School and made what she still feels is the right decision to hold school the following Monday so the students could get back into a routine.

"That sense of normalcy is very important (after a disaster)," she said.

The most immediate need was shelter for people whose homes had been damaged, Lawrence said, prompting the American Red Cross to set up an emergency shelter in Townsend Community Center in South Columbus.

The next day, volunteer groups from businesses and area churches like Fairview Baptist Church and Abundant Life Christian Church began to mobilize.

"They brought chainsaws," Smith said. "They cut trees up and helped move them to the streets where our street department could pick them up. Then you had people that volunteered from the community cooking food for people that had been hit by the tornado."

For the first few days, there was a lack of cohesion among volunteer agencies.

It was inconvenient enough that officials set up a Disaster Assistance Center in the lower level of the Trotter Convention Center downtown. It became a "one-stop shop" for the Mississippi Emergency Management Agency and others like the Red Cross, Salvation Army and Small Business Association to aid residents in need, Dillon said.

Smith said that will be one thing he's sure to do differently the next time the city has a similar emergency.

"If it happened again, I would get with Cindy ... and then assemble all these people together under one roof like we finally did ..., but immediately ... rather than a week later," he said.

In total, the storm damaged or destroyed 275 homes and 38 businesses. Lawrence estimates government agencies cleared about $4 million in damage. The city demolished 23 homes, three of which are currently being rebuilt by volunteers with the Community Recovery of Lowndes County, a nonprofit set up in the months after the storm to assist residents in need.

Of the public property damaged, the most severe was at Sim Scott Park, across from Hunt.

"To put it in a nutshell, it pretty much totally destroyed Sim Scott Park and all of the buildings and equipment that were located in the park," Smith said.

Despite the destruction, there was no immediate declaration of a disaster from the Federal Emergency Management Agency.

Part of that was because the tornado was considered one part of a larger statewide flooding emergency, Lawrence said, which wasn't even over until floodwaters had receded in places like Vicksburg weeks later.

It was probably her biggest lesson to come out of the tornado, she said.

"We have to be more proactive and step up and take care of Lowndes County ourselves until assistance gets here," she said. "... Because everybody kept saying, 'FEMA. We're waiting for FEMA.' ... There was no FEMA for months."

When the FEMA declaration did come in April, it was good news only for the government agencies that suffered damage. FEMA would reimburse 75 percent of repairs to damaged public property, MEMA would pay for 12.5 percent and the local government would be on the hook for whatever was left. This was good both for CMSD, with the cost of rebuilding Hunt currently estimated at $10 to $12 million, and the city, which is completely rebuilding Sim Scott Park's community center for about $900,000.

But that declaration did not specify any federal individual assistance, at first.

Lowndes County Tax Assessor Greg Andrews appealed the decision, a months-long endeavor that finally ended in September, when FEMA announced it would provide federal funds to property owners depending on need.

FEMA representatives set up a Disaster Relief Center in the East Columbus Gym through late September and October to help connect residents with individual assistance.

The city, for its part, has issued $5 million in bonded debt to front the disaster relief costs to public property pending reimbursement.

A year later, the city still bears scars from the storm.

Hunt's roof is covered in tarps, and Labat said it won't be until after 2021 that the Success Academy's students -- who are currently in the newly renovated Union Academy -- can move back into the building.

Across the street, a metal frame is in place while construction company Precision Metal builds a 9,000 square-foot building that will house both the senior and community center at Sim Scott Park. Smith said he hopes it will be open by the summer.

With many of the affected residents being renters or people without insurance, dozens of the damaged homes are awaiting repairs or demolition, with the former residents living with family or having moved away altogether.

Lawrence said the storm emphasized the necessity of home and renter's insurance. Many of the residents affected by the storm, particularly renters, had no insurance company they could turn to for aid.

"They had no one to rely on because they had no assistance from anybody," she said. "... They were trying to find someone to help, so we started relying on volunteer agencies to assist."

She, Labat and Smith all credited nonprofit agencies, churches, businesses and individual volunteers who stepped up to help the community in the days and weeks after the storm -- from out-of-state volunteers who fixed roofs to local restaurants that provided food for the emergency shelter.

"That was the bright side of what was happening was so many people wanting to help," Dillon said.