'It still ain't quite right yet': Shady Street slowly bounces back from 2019 tornado 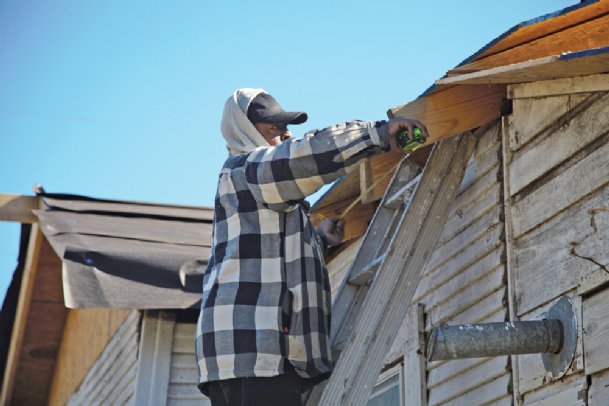 Willie Peterson, a carpenter of 17 years, measures a house roof that he's repairing on Shady Street on Friday afternoon. He's preparing the roof for new shingles to be installed on Saturday, he said. The house is one of several on the street damaged or destroyed by a Feb. 23, 2019, tornado on which repairs have still not been completed. Photo by: Yue Stella Yu/Dispatch Staff

A vacant house, the top of which is missing due to the Feb. 23, 2019, tornado, stands on Shady Street on Friday afternoon.
Photo by: Yue Stella Yu/Dispatch Staff 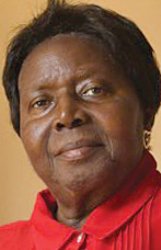 It was cold Friday afternoon, but Willie Peterson was glad to be back to work all the same.

Climbing to the top few steps of a ladder leaned against the side of a house on Shady Street, he surveyed how well the roof work had held up to recent days of significant rainfall that finally ceased late Thursday afternoon. Then coming down from the ladder, Peterson began preparing for his next tasks.

"After the (tornado) came through last year, the whole top was gone," Peterson said of the house. "We're trying to finish up and get some shingles on before the next rain comes through.

"We already redid one house on another block," added the carpenter of 17 years who is working for local contractor Sammie Hill.

Improvements to the vacant house are obvious, best signaled by the roof work in process and rebuilt wooden frame for a new awning over the front patio. But busted windows, tattered blinds and evidence of months' worth of unchecked water damage show the scars of its lost battle with an EF-3 tornado and the slow process underway to reclaim its former character.

In many ways, the house could be considered a microcosm of the entire neighborhood, or even all of Northside. Today, exactly a year since the tornado ripped through, what once were two rows of intact, mostly occupied houses on Shady Street -- among the most affected neighborhoods from the storm -- are interrupted by the intermittent unlivable shell or blue tarps covering holes in roofs above families making do.

Some residents, mostly renters, left after the storms while their landlords decided whether to rebuild or demolish storm-ravaged structures. The lucky ones who could stay -- either because their house was untouched or is still livable -- seem to have banded together to make the best of the situation, said Peterson, a resident of nearby Mill Street.

"This side of town has been in a danger zone," he said. "Besides the storm, it floods here a lot too. I think some people are giving up on this side of town, but some people don't want to give up because this is where they grew up.

"People are really coming together and taking care of each other," he added. "It's like it should have been from the beginning, instead of waiting on a disaster to make the change."

Shady Street, which connects with 14th Avenue North a block west of Waterworks Road, is named for the large canopy trees growing in the neighborhood. Many of those trees succumbed to the Feb. 23, 2019, tornado, with some landing on homes and vehicles.

Nadine Ervin lived in New Hope at the time, and as soon as the storms had cleared the area, she jumped in her car to drive to her aunt, Ethel Stevenson, who has lived on Shady Street for more than 20 years.

"I couldn't get through," Ervin recalled. "When I saw all the destruction, I said, 'Oh my God.'"

Luckily, Stevenson, now 73, was OK. At the time she was recovering from surgery and temporarily confined to a wheelchair. She and two of her grandchildren took shelter in the living room as the storm passed overhead, badly damaging a home across the street and another right next door.

Stevenson's house escaped with only shattered glass on the front door.

"I couldn't do nothing but pray and sit in the wheelchair," Stevenson said. "... My grandson (who she said is 40) was looking out the window to see what was going on, and I told him, 'Boy, get out of that window and sit down somewhere.'

Down the street to the south, another 20-year resident of Shady Street, who spoke to The Dispatch on the condition her name not be printed, hunkered down with her teenage son in their bath tub.

"They say to get in the tub, so we hopped in the tub," she said. "... I couldn't believe a tornado was coming toward us. It sounded like a freight train."

She and her son were unharmed, but a tree fell on two of her vehicles. Her sister, who she said lives on Waterworks Road, also lost a vehicle and had roof damage and water leaks at her home that caused electrical problems.

Still, she said, it could have been worse.

'I'll be glad when they get done fixing'

At about 3 p.m., a school bus turned onto Shady Street and let a few Columbus Municipal School District children out at their homes.

The bus isn't quite as full as it used to be, though, Stevenson said.

Immediately after the storm, Stevenson said Shady Street "looked like a ghost town." For three days, residents were without electricity, and Stevenson relied on churches bringing her hot meals until her power could be restored.

Since then, she's endured neighbors who left, probably never to return, as well as occasional looters and squatters in the abandoned structures.

But she, too, has seen the neighborhood slowly lurch back to something that would be considered normal before the storm.

"It still ain't quite right yet because some of these houses still haven't been fixed," she said. "... They are fixing it little by little, ... but I'll be glad when they get done fixing."