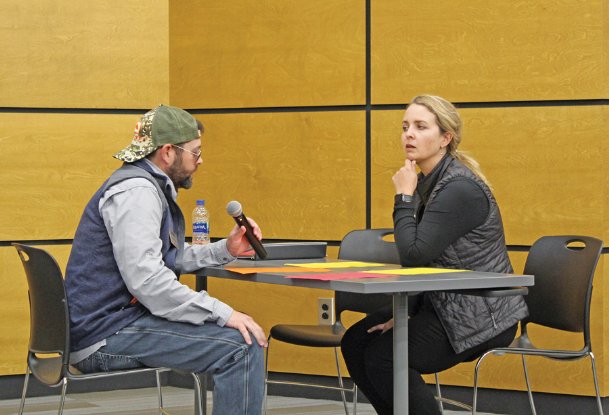 Lu McCrary pretends to interview for a job with his wife Katie McCrary at the Career and Technical Center on Wednesday. The couple own McCrary West Construction, one of the founding businesses of the FORGE Foundation, which works with area students to prepare them to enter the workforce. Lu and Katie McCrary spoke to students about soft skills to prepare them for today, when more than 300 students will have mock interviews with area industries as part of FORGE Foundation's Soft Skills University. Photo by: Isabelle Altman/Dispatch Staff 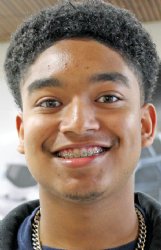 At least one of Lu McCrary's interviews Wednesday did not go well.

He fist-bumped the interviewer rather than shaking her hand, wore a backward baseball cap and sunglasses, told the interviewer he was "taking a break from life" and offered to show her his tattoos.

Luckily it was a mock interview with his wife Katie McCrary -- with whom he owns McCrary West Construction -- put on for area high school students from both Lowndes County and Columbus Municipal school districts at LCSD's Career and Technical Center. It was the first day of the two-day Soft Skills University for the students, and the McCrarys wanted to show them examples of job interviews that went well and interviews that did not.

That was in hopes of preparing them for today, when more than 300 students will have their own mock interviews with representatives from more than 30 area businesses and organizations.

The McCrarys are among the founding members of the FORGE (Family Organizations Recruiting Great Employees) Foundation made up of eight local businesses in construction-related fields. The organization began holding programs to teach area students how to prepare for the workforce, starting with a soft skills program at Caledonia High School four years ago. The program has since grown into the two-day soft skills workshop ending with the mock interviews for students, which was held for the first time last year.

"We did not realize how much (students) needed to learn until we did the interview process last year and we did not realize how badly kids needed to be instructed on how to make eye contact and shake hands," Katie McCrary said. "Our generation was taught that. Our parents taught us and we had it in classes and different things, and these kids, they're not grasping that."

The McCrarys and representatives from other businesses and organizations, such as Hamilton-based Tronox and the Chamber of Commerce's Golden Triangle Leadership program, spoke with students at CTC about how to prepare to enter the workforce -- broaching topics from nonverbal cues and communication to how to build a resume and cover letter.

The latter in particular caught the attention of Zachary Wilson, a senior from McKellar Technology Center and student body president of Columbus High School, who attended the workshop with about 65 of his fellow students. While Wilson said a lot of the topics covered were just reinforcing things he'd already known, others were entirely new to him.

The topic the speakers really wanted to drive home was the use of social media. Katie McCrary told the students the first thing she does when she gets an application is looks up the applicant on Facebook. No matter what the applicant's privacy settings are, she said, she can see the profile and background photos on the page and that gives her a first impression.

The speakers also emphasized the use of social media and cell phones can impact their jobs once they have it. They've had employees get in trouble for taking pictures at clients' businesses and then posting them online or getting into arguments with others on Facebook, Katie McCrary said.

"They can't ever hear enough how cell phones and social media, while it's good, it can also cost you your job. It can cost the company you're working for money," said Christee Holbrook, president of Graham Roofing and another founding member of FORGE, who helped organize the event. "... We have so many stories amongst us about what social media and cell phones have done."

Chris Bray, director of McKellar, said the social media portion of the presentation was one that stuck with kids.

"Talking with some of the students afterwards ... they just didn't understand the social media part of it, the permanence of that and how it can affect them long-term," Bray said. "...They didn't realize (employers) checked that type of stuff."

But the biggest topic was preparation for interviews and making a good first impression -- from what to wear to how to interact with other employees at a business.

"We never want them to think we're trying to change who they are," Katie McCrary said. "... We're never trying to do that. We're simply trying to teach them how they can excel and how they can be ahead of the group when they go to apply for jobs. There are things that show respect and there are simple ways that you do things in businesses. A lot of these kids just don't have a clue, and they get it once you say it and once you practice it with them. It just becomes really valuable to them and their success."

Today's interviews of the students will go from 8 a.m.-1 p.m., Holbrook said. Students will be divided into groups and interview with businesses based on their interest and programs.

"If you're in culinary, someone in the restaurant business or catering or entertainment is going to interview them," she said. "If they're in education, it'll be some form of educator. ... We tried to make it program-specific.

"The more they can do it or the more comfortable they can get, the more feedback they can get on it, it's going to help them in the long run," she added.

Both business representatives and area educators said the Soft Skills University is an example of the benefits of a partnership between area schools and industry.

"I want to see our students receive a stellar education in Mississippi and Lowndes County and go to work in Lowndes County," said Sunny Brownlee, CTC student services coordinator. "The partnership between us and McKellar and our industry partners ... I think it paves the way for our students to have a prosperous future."