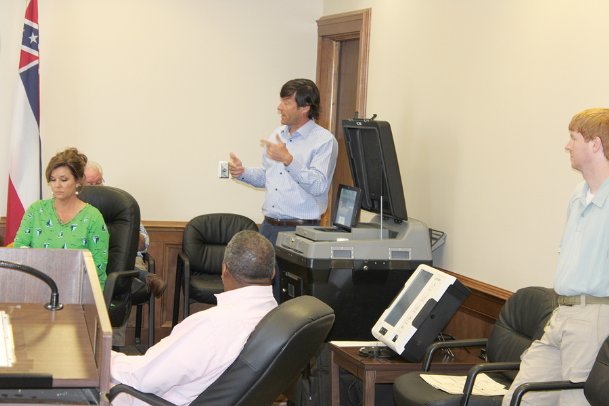 Bill Lowe, account representative with Election Systems and Software, demonstrates a machine that will process and record paper ballots during a special-call Lowndes County Board of Supervisors meeting on Tuesday. The county plans to return to a paper ballot voting system but will use the touchscreen system for November's general election. Photo by: Zack Plair/Dispatch Staff 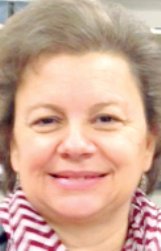 It appears Lowndes County elections will return to paper ballots but not in time for November.

The board of supervisors, in a special-call meeting Tuesday, authorized Circuit Clerk Teresa Barksdale to pursue an agreement with Election Systems and Software (ES&S) that would replace the current touchscreen voting machines with units that would process and record paper ballots at polling locations.

"We would like to (have the new system in place) by the general election, but I'm not sure we could implement it by then," Barksdale told supervisors.

With the new system, voters will mark a paper ballot at their polling location and feed it into the new machines on-site. The machine will scan a PDF of the ballot, record and tabulate the votes on a flash drive, then store the hard copies of the ballots in a locked compartment inside, which will make it easier to conduct a recount if necessary. The system would also allow the county to print extra ballots on demand if election day turnout exceeds expectations.

ES&S quoted the county a one-time price of $250,422.50 for 30 machines, including software and services, with an additional $21,370 annually for maintenance and support fees.

Barksdale said the county would use an estimated $200,000 Help America Vote Act money available through the Mississippi Secretary of State's Office to pay for most of the upgrade. The remainder would come from the circuit clerk's annual budget for elections, which she said could cover as much as $100,000 of the equipment cost.

Bill Lowe, an ES&S account representative demonstrating the new election equipment Tuesday, said 12 Mississippi counties had already transitioned to the paper ballot system, with seven others -- including Oktibbeha -- poised to do so by November's general election for President, U.S. House and Senate races. Given the size of those counties, mostly the larger ones in the state, that makes up about 50 percent of the voters, he said.

That matches a national trend, Lowe said, where an increasing number of states are returning to paper ballots.

"The current (touchscreen) system works great, but we're just seeing a trend of voters having more confidence marking their own (paper) ballot," he said.

Moreover, Lowndes County bought its current voting machines in 2005 and 2006. New touchscreen machines are becoming less available due to the trend back to paper, so the county needed to replace the obsolete equipment sooner than later, Deputy Circuit Clerk for Elections Pat Stanley said.

Still, Stanley said the old machines would be used in the general election to ensure she and the election commissioners had enough time to properly train poll workers on the new system.