Aldermen say no to closing non-essential businesses; city still has no set curfew 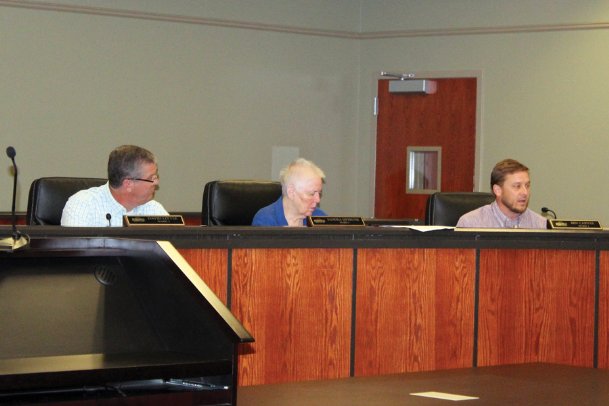 Ward 1 Alderman Ben Carver, right, explains to the Starkville board of aldermen at the special-call meeting Tuesday why he disagreed with the proposed resolution to shut down "non-essential" businesses for 15 days to try to prevent the spread of COVID-19 coronavirus. Carver and Ward 3 Alderman David Little, left, voted against the proposal. Ward 2 Alderman Sandra Sistrunk, center, voted for it. Photo by: Tess Vrbin/Dispatch Staff

Starkville aldermen shot down a measure during a special-call meeting Tuesday to expand restrictions on "non-essential" businesses and facilities in response to the COVID-19 coronavirus outbreak.

The proposed updated resolution would have closed any establishments with a high "likelihood of close person-to-person contact," including but not limited to shopping centers, community centers, parks, bars, gyms and beauty salons. The mandate would have lasted 15 days so the board of aldermen could revisit the topic at its April 7 meeting.

It would have added to restrictions the city has already imposed due to the spread of the virus, including limiting restaurants to serve customers via takeout, drive-through and delivery only; and restricting social and business gatherings to 10 people or fewer. Although technically the existing restrictions do not shutter bars, the inability to serve dine-in customers effectively did.

Carver had several minutes of prepared comments, including that forcing businesses to close would hurt both the local economy and workers who live "paycheck to paycheck."

"Sadly, I think if this motion passes today, it would be a daily nail driven into the coffin of local businesses," Carver said. "They're already suffering, and we know that because we're all suffering together, but closing the doors temporarily on small businesses is not the answer right now."

Sistrunk said the proposal was an improvement upon last week's restrictions and it should be the responsibility of both government and individuals to limit interpersonal contact.

"If everybody would do it on their own without our intervention, we wouldn't be having this meeting," Sistrunk said.

The proposal also would have required all essential businesses to take precautions to keep employees and the public safe, including mandatory social distancing, sending sick employees home and implementing work-from-home policies.

Grocery stores are essential businesses that would stay open even under more restrictions,and Carver said someone is more likely to pick up COVID-19 there than at any of the places listed in the resolution as non-essential.

He argued that "almost all businesses are essential" such as the extermination business, for which he has worked and which can save a person's life from an allergic reaction to bugs and other pests, he said.

He also took issue with the board being seated as it normally is for a meeting, with less than six feet between city officials instead of "practicing proper social distancing."

"This is the closest I've been to another human being other than my family in the last few days," Carver said.

Vaughn added that the city might be able to close public places like parks but cannot mandate social distancing on private property.

"When we talk about shutting parks down, kids will find somewhere to play basketball, 10 or 12 of them," Vaughn said.

Mayor Lynn Spruill said after the meeting that she believed the board should have passed the resolution. Beatty said he had mixed feelings about the vote.

"I want to do everything we can do to protect small businesses and try to keep our economy intact, but at the same time protect public safety, health and wellbeing," he said.

On Twitter after the meeting, a user confronted Spruill with "How much more does it take to see that these measures need to be taken?"

Spruill responded, "That question needs to be directed at the 4 gentlemen who voted otherwise. I don't have that answer."

As of Tuesday morning, there were five confirmed cases in Oktibbeha County.

The city still has not enacted a curfew, whereas the neighboring city of Columbus and Lowndes County both have. Spruill said at Friday's special-call meeting that she did not believe a curfew was necessary yet, and she said Tuesday that she considered it a "last-ditch" effort.

She said she felt the need to present the board with a resolution for a curfew because Columbus, Tupelo and Meridian have each implemented one, but the board did not discuss the option at length.

Oktibbeha County Board of Supervisors President John Montgomery attended the board of aldermen meeting, but Beatty said it is "concerning" that the city and county governing boards in all three Golden Triangle counties have not been working in tandem on policies meant to curb the spread of COVID-19.

"The Golden Triangle's very fluid," Beatty told The Dispatch. "People are going from Columbus to Starkville and back (to) work and shop regionally, (but) we're not in coordination with the cities of Columbus and West Point or with Lowndes and Clay counties."