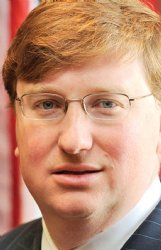 Gov. Tate Reeves issued an executive order Wednesday for Mississippians to shelter in place in the wake of the pandemic of COVID-19 coronavirus.

The "shelter in place" order, which Reeves announced in a press conference that was streamed online, will go into effect on Friday at 5 p.m. and last until April 20 at the earliest. Residents may leave their homes for essential travels, such as buying food and other necessary supplies.

Outdoor activities are allowed at a social distance of six feet apart, but gatherings of 10 or more people are still prohibited, according to the order. All public parks are closed as part of the order, except for walking trails.

Reeves said the decision came as the situation became dire and called for the "drastic" measure to slow down the spread of the virus.

As of Wednesday night, Mississippi State Department of Health confirmed 1,177 cases of coronavirus in the state, with 26 deaths confirmed in 24 counties. Cases have been confirmed in the Golden Triangle area, with 10 in Lowndes County, 20 in Oktibbeha County, seven in Clay County and four in Noxubee County.

"Mississippi will not allow you to fall without a helping hand," Reeves said. "This will not be easy for anyone, but we believe it is the right course of action."

Enforcement of the executive order, Reeves said, eventually falls on every Mississippian.

"The single most important enforcement mechanism that we can have in the state of Mississippi is you," he said. "If you will self-enforce this, it will go a long way towards slowing the spread."

According to the Associated Press, Reeves consulted with health officials at the state level, including Dr. LouAnn Woodward, the physician who leads the University of Mississippi Medical Center, before issuing the order. Woodward warned Reeves and other state leaders that Mississippi's health system would be overwhelmed and that there would not be enough ventilators and other resources for patients if Reeves did not issue the order, The AP reported.

More than 30 governors nationwide have already signed similar orders to keep residents indoors in the wake of the pandemic, according to multiple media outlets.