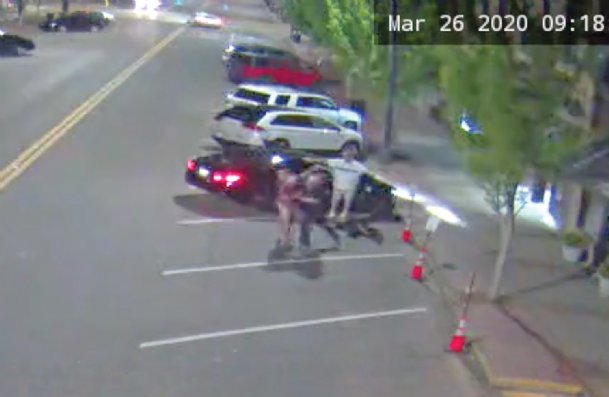 This screenshot of a video from a College Street surveillance camera, shows an altercation between Huckâs Place co-owner Brian Huckaby and former Lowndes County deputy Max Branch outside the downtown restaurant on March 26. The altercation apparently started when Huckaby attempted to keep Branch from driving after consuming alcohol. Photo by: Courtesy image

City officials have released a video of a March 26 altercation outside Huck's Place downtown between the restaurant owner and a former Lowndes County deputy.

The video is taken from a surveillance camera on College Street that covers the entrance to the downtown restaurant. The Dispatch obtained the video through a public records request.

Columbus Police Chief Fred Shelton said the altercation occurred between Deputy Johnny Max Branch and Huck's Place co-owner Brian Huckaby when Branch attempted to leave the restaurant after he had been drinking. Huckaby and his brother, Richard Huckaby, who also appears in the video, were trying to convince him to let someone else drive him, Shelton said.

No one has been charged in the incident, Shelton said.

Branch was off-duty at the time of the incident and resigned from Lowndes County Sheriff's Office on Tuesday.

The video begins with a man Shelton identified as Brian Huckaby (black shirt) and his brother, Richard (white shirt), standing outside the front passenger seat of a vehicle parked on Fifth Street in front of Huck's.

Less than two minutes into the video, a man Shelton identified as Branch (red shirt), gets out of the driver's side of the vehicle and walks around the car to talk to Brian. It appears Branch leans against Brian during the verbal exchange.

Brian tries several times to walk or back away but Branch follows. About 2 minutes, 20 seconds into the video, Brian punches Branch, who backs away and then grabs Brian around the waist. The two grapple before Brian falls to the ground and Branch gets on top of him.

At that point, Richard Huckaby appears to get Branch off Brian and holds him on the ground while Brian gets up. Brian appears to hit Branch several more times before a female Huck's employee arrives, and they all three hold Branch down until law enforcement arrive at the scene.

Shelton said Branch's girlfriend, who works at Huck's and had been trying to drive Branch home, was in the car but left and went back into the restaurant before the incident occurred.

Representatives for Huck's did not return calls from The Dispatch by press time.