Laid off Starkville resident provides meals for others during quarantine 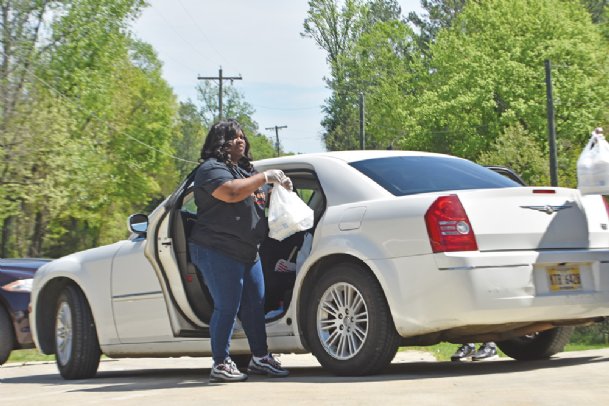 Like many others during the COVID-19 coronavirus pandemic, Starkville resident SaPerior Patton has found herself temporarily unemployed.

A sinking feeling crept in. But it wasn't for herself.

Patton, who usually works alongside children with behavior and emotional problems at a private school in Starkville, immediately thought about potential precarious circumstances her students may endure while away from school for an extended period. She wanted to make sure none of them missed a meal.

"I just thought of all the kids. We have kids in foster homes and others that are really in bad situations," Patton said. "I just thought with them being out of school already, I already know what some don't have. We also don't know when we're going back. I just took it upon myself to do something. I don't know, God just put it on my heart."

Eventually, her concern extended to additional avenues. What about other adults like her who are laid off during quarantine? What about the at-risk residents in the community that take on enormous danger to their health every time they leave their homes, yet still need to eat?

"I know what it's like not to have," Patton said.

So, she took action.

Patton compiled what money she had and went to the grocery store. She began buying supplies to compile meals for community members. Starting three weeks ago, Patton set her mind to a goal of delivering at least 50 meals to Starkville residents every Wednesday. Each plate includes spaghetti, green beans, cornbread and drinks.

Patton has encouraged any Starkville resident in need of a meal to reach out through her personal Facebook page. She's advertised her services in various places, including the Facebook group Starkville Strong.

"I made a Facebook post and said if anyone is unemployed like me because of the coronavirus, or needs a break with a meal with the kids at home because of the virus, I just told people to inbox me," Patton said. "It will be confidential because I know some people may be embarrassed, so it just started from there."

Since she started posting about her food delivery on social media, Patton said complete strangers have reached out to help her cause by donating items such as spaghetti sauce, ground beef and even gas money.

"The community has contributed," Patton said. "There have been people that I've never seen and don't know that have donated $5 or $10 so we can have gas. People have been contributing ... no donation is too small."

Mark Welch, owner of 1883 Smokehouse restaurant in Starkville, was touched by Patton's community outreach and donated vegetables and 10 pounds of pork this week to feed additional people in need. Instead of the usual 50 plates, Patton was able to deliver 75 meals Wednesday.

"When I see someone that's taken it on their own initiative to help their fellow citizens, you have to help them out," said Welch, who said his restaurant has lost more than 65 percent of its sales since the start of the pandemic. "She's the one doing the hard work, not me. Giving her the food for her to do all the hard work and putting it together and transporting it, that's really the hard part. All I'm doing is playing a Secret Santa."

Wednesday afternoon, Patton, with assistance from her sister and her niece, finished loading her car with spaghetti and pork plates moments before her first stop.

"Thank you so much," Graves told Patton after the food and drinks had been delivered. It was just one of many deliveries on the agenda.

Wednesdays have nearly turned into a full-time job for Patton, with a 6 a.m. wake up call to begin preparations for the day. She typically makes her last delivery by 3:30 p.m. Her non-Wednesdays are spent collecting food for delivery day, whether it be from donations or securing it herself at a grocery store.

"I do use hand sanitizer after every delivery and keep Lysol in the car," Patton said. "I don't go in the house, but I let them know I'm on my way so they'll meet me at the door with their food. It definitely can make for some long days."