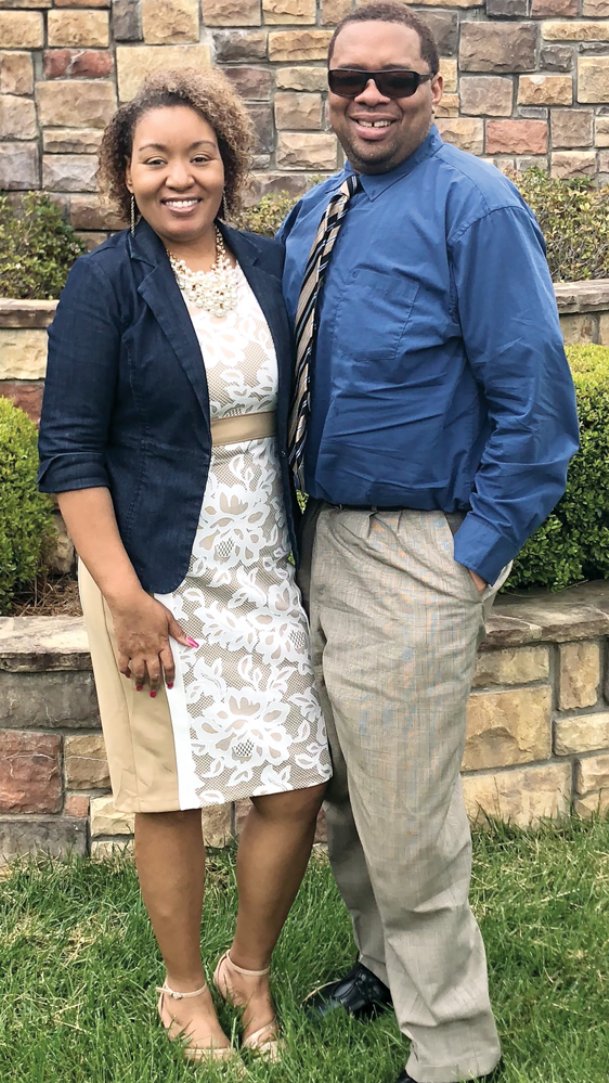 Jason Minor is pictured with his wife, Kaile. Jason, a 1997 graduate of Starkville High School, passed away Monday in Charlotte, North Carolina, of complications from COVID-19. He spent the last month of his life in a Charlotte hospital, and for most days he needed a ventilator to breathe. Photo by: Courtesy photo

When Kaile King visited Mississippi State University as a high school senior from Carthage in spring 1998, she had all but decided to attend Ole Miss.

Then she noticed the drummer for the MSU Black Voices and he made enough of an impression for Kaile to enroll in Starkville that fall instead.

Her hunch wasn't wrong. By September, Kaile and Jason Minor were officially a couple. By 2000, they were married.

But on Monday, in the intensive care unit of a Charlotte, North Carolina hospital, Kaile Minor, flanked by two of her three daughters, said goodbye to Jason, who had spent much of the previous month on a ventilator fighting for his life against the unpredictable adversary COVID-19.

"The doctor told me the virus had just ravaged his heart, and his heart gave out," Kaile said.

Jason, 41, was no stranger to health problems. He had been diagnosed with diabetes at age 12, and the condition had completely claimed his eyesight by 2008. He received a kidney transplant in 2011 and suffered a mild heart attack during the year he had waited on the transplant list. Still, he had bounced back from each challenge, even holding down a job and working out at the gym three days a week.

"He had overcome so much over the years," Kaile said. "But this one; this was different."

A lover of music and people

Jason sang tenor, quite well if you ask his mother, Charlene Minor.

But his musical passion was percussion.

He played the drums in school bands through elementary and middle school, Charlene said, and played football at Starkville High School, where he graduated in 1997. He continued playing drums and singing with the Black Voices at MSU, though he never joined the Famous Maroon Band.

"He was a lover of music and singing," said Charlene, who retired in 2001 from a 35-year career as an elementary school teacher at Starkville Public Schools and still lives in the city. "He was so well known around Starkville and well liked. He was just Jason."

Growing up as a member of Ebenezer Baptist Church on Oktoc Road, he was the youngest of three brothers, all of whom ended up working in the ministry. Jason served stints as music minister at Emmanuel Baptist and Life Church in Starkville after he graduated from college.

But after he lost his eyesight, Kaile said Jason began wanting to do something other than church work. He found that opportunity in Charlotte at a Lions Services Inc. factory that specializes in employing the vision impaired.

"That was really our motivation to move from Starkville (about five years ago)," Kaile said. "... After Jason lost his sight, he handled it a lot better than I did. He was never depressed or discouraged. It was always a motivator for him to show he could still overcome.

"He would tell me, 'The only thing I wish I could see is my girls' faces and how they grow up through the years,'" she added. "So I would tell him sometimes what they look like. The middle daughter (Kailynn) looks just like him."

Classified as a trainer, Jason worked in just about every part of the factory, Kaile said, diligently managing his health and diet and insisting on being as self sufficient as he could.

"He worked out, he was a vegetarian and he was very serious about his health," Kaile said. "(Before March), he hadn't been in the hospital the whole time we had been in Charlotte. ... The only thing he couldn't do was drive, so we would have to take him places sometimes. Everything else, he pretty much did on his own."

That included ministering to his 400 or so coworkers, which often took lots of help from Kaile.

"Many of the people he worked with were unmarried ... so sometimes he would ask me to cook something that he would take to them at work,"she said. "He wanted to treat his friends to things they didn't necessarily get all the time."

In Charlotte, Jason also met friends and coworkers who came from other countries. For them, he tried to pick up what he could of their native language.

"He had learned some Spanish, some Mandarin," Kaile said. "He was even learning how to send text messages to one of his coworkers in Russian."

By mid-March, as discussions had begun in earnest about businesses closing, citizens self-quarantining and states enacting shelter in place orders, Jason learned Lions Services -- which would be deemed essential due to producing for government contracts -- would remain open.

Because of Jason's underlying health problems, Kaile pleaded with her husband not to return to work until the pandemic passed, even if that meant taking unpaid leave. Kaile, executive director for a men's shelter in a nearby South Carolina town, was already working from home, and they determined they could make it short-term on just her income. So Jason complied with his wife's wishes.

"As far as we can tell, he had already contracted the virus by then," Kaile said. "He was sick and we didn't know it."

For five days after Jason stopped working, he just seemed to have a minor cough and cold. By March 21, he had developed a fever of more than 101 degrees Fahrenheit. He was admitted to a nearby hospital and tested for COVID-19, officially finding out the test was positive two days later.

"By the time we got the results, he was already on a ventilator," Kaile said. "That's how fast it ravaged his lungs."

"During those days it was really a rollercoaster ride," Kaile said. "One day, he would be on 75 percent ventilator, some days 60 percent and one day they got him down to 50 percent."

Kaile called the hospital multiple times a day and kept Charlene abreast of her son's condition, even as Jason's breathing became 100-percent dependent on the ventilator.

"I was really optimistic until I talked to him once on the phone (during the span in March when he wasn't on the ventilator)," Charlene recalled. "He was so short of breath, and I told him not to call me any more and to save his strength. ... I couldn't sleep well (during that time). But I could pray."

Jason developed a blood clot in his lungs doctors unsuccessfully tried to treat with medicine. They gave him azithromycin and hydroxychloroquine, neither of which seemed to help, Kaile said.

Still, on Sunday, Kaile talked to a nurse at about 11 p.m., who told her Jason was stable and had his ventilator dialed back to 95 percent.

She awoke at 5:45 a.m. Monday, though, to a call from the hospital that Jason's situation had deteriorated.

"They said his oxygen, his blood pressure, all his vitals were dropping," Kaile said. "The nurse told me, 'we can't keep him alive much longer.'"

Though family hadn't seen Jason since he had been admitted, the hospital allowed Kaile and her younger two daughters -- Kailynn, 19, and Kariah, 17, who live in Charlotte -- to come say goodbye. About 30 minutes after they arrived, Jason was gone.

"I've always believed this virus was serious," Kaile said. "I've been telling everyone I encounter, 'Don't take it lightly.' ... The (medical professionals) don't know how it works because it's so new. They're experimenting on patients because we have no true answers and there is no cure."

Jason's eldest daughter, Raven, is graduating from MSU next week with a degree in fashion merchandising.

The Minors had planned to arrive in Starkville this week to celebrate the accomplishment. COVID-19 had already changed that plan, as campus closures are forcing Raven to "graduate virtually."

Instead, Raven, and Jason's parents, all hit the road Thursday headed to Charlotte so they could celebrate Jason's life and mourn his passing.

There will be no visitation or big funeral service. Jason's body will be cremated.

Saying goodbye will be hard. Keeping his memory and spirit alive will be much easier, Kaile said, and especially critical for his 7-month-old grandson Kason, the apple of Jason's eye in the six months before he became ill.

"He was an amazing family man," Kaile said of her husband. "He loved me and the girls, and it was evident. ... We're going to make a special effort for Kason to know how much he meant to his grandfather."

By summer, or as soon as possible, Charlene hopes to have a "big memorial" for Jason at Ebenezer in Starkville. In the meantime, she said friends have been sending their condolences by phone and mail.

"All this coronavirus stuff will pass one day," she said. "It's all in God's hands. We have no control over it."