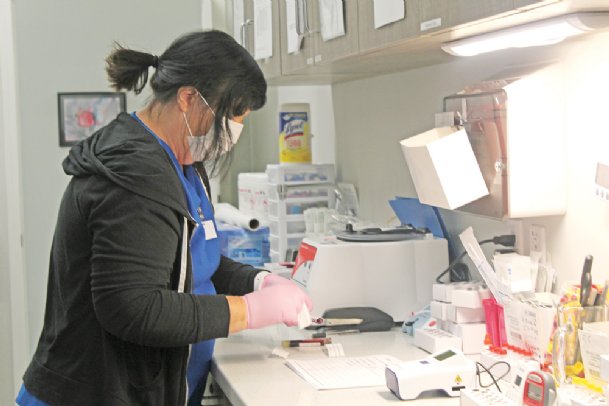 Kathleen Smith, a registered nurse with Allegro Family Clinic in Columbus, prepares a sample of blood from a patient for lab work at Weekend Plus Urgent Care off Highway 45 Wednesday. Similar blood samples will be tested for COVID-19 antibodies, which help determine if a patient has been exposed to the coronavirus or similar viruses. Photo by: Isabelle Altman/Dispatch Staff

Nurses at Allegro Family Clinic Adrianna Sykes, LPN, and Kathleen Smith, RN, demonstrate how nurses draw blood from patients for the SARS-COV-2IgG test, which tests for COVID-19 antibodies, at the Weekend Plus Urgent Care off Highway 45 Wednesday. Hundreds of people in the Golden Triangle have received the test from Allegro, State Urgent Care in Starkville or other clinics offering the test to determine whether they have been exposed to COVID-19, but health experts stressed a positive test result does not mean patients are immune and can stop practicing health and safety measures recommended by the Centers for Disease Control and Prevention.
Photo by: Isabelle Altman/Dispatch Staff 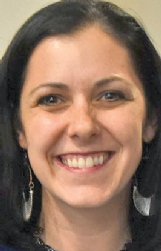 The vice president of Allegro Family Clinic in Columbus was one of the first in her clinics to receive the SARS-COV-2IgG (immunoglobulin G) test, which examines blood for antibodies for COVID-19. Bogue wanted to have it done so she could easily explain it to patients when Allegro started the tests about two weeks ago.

Since then, Allegro has tested more than 65 patients for the antibodies. At State Urgent Care, on South Montgomery Street in Starkville, staff have tested between 250 and 300 patients, said nurse practitioner Kristi Robertson.

"This is checking for the presence of the antibody for the specific virus related to COVID-19," Robertson said. "So if someone gets their test results back and it is antibody negative, that is saying that within at least ... the last four weeks or longer, they have not had the virus or been exposed to the virus. Verses if it comes back positive, it is saying that they have likely either been exposed to it or could have had a case of it."

Bogue compared it to testing for mononucleosis.

"If you've ever had mono before and then you get an antibody test (for that disease) later on, you're always going to show that you had mono. It's the same thing with the virus," she said. "A lot of people were really sick in December or January before we knew what this was, so that's where they're kind of curious. They're like, 'Well, did I have it?'"

Both Allegro and State Urgent Care have tested patients who were sick in December or earlier this year before health care professionals were easily recognizing COVID-19 symptoms, but who tested negative for flu, strep and other common respiratory illnesses. The patients have their blood drawn, the blood samples are sent to a laboratory and the results come back within about two days.

However, Bogue and Robertson both said there are caveats.

'It's not a green light'

Bogue said the test is "a little iffy and almost controversial" in an email to The Dispatch, because there's a risk some people will try to use it to diagnose COVID-19, which health care officials do not recommend.

Neither do the Mississippi State Department of Health nor the U.S. Food and Drug Administration.

"There could be use in clinical settings to determine if an individual has been exposed," said MSDH Office of Communications Director Liz Sharlot in an email to The Dispatch, "but that is still a little unclear."

On its website, FDA recommends health care providers use antibody tests, just not to definitively diagnose patients with COVID-19.

Bogue and Robertson both emphasized a positive result does not guarantee a patient will be safe from COVID-19 now or in the future.

"It's not like it's a green light to do whatever," Robertson said. "You still have to wash your hands, wear your mask, (practice) safe distancing, all those types of things, because there's just still so many unknowns at this point."

Bogue added it's possible some positive test results actually indicate a patient has been exposed to a different strand of SARS respiratory illnesses, which have been around "forever," she said.

"Don't think you're the Hulk and just can go out and do whatever you want," she said. "We don't know what it means. We still need you to take just as many precautions as everybody else because ... there's other things that it might pick up."

However, she said, from what she's seen at Allegro so far, the test is a good indicator. Patients who previously tested positive for COVID-19 have seen results in the 7-8 range in their antibody tests -- an extremely high positive result. Bogue, who has never thought she had COVID-19, tested less than 0.1 -- an extremely negative result.

Bogue and Robertson both urged patients to check with their clinics or health care providers if they are interested in taking the test. Many health insurance companies will cover the cost of testing, though Bogue said patients who want to pay cash can call Allegro. State Urgent Care is charging $100 for patients who don't have insurance.

While the test is not a guarantee of safety from COVID-19 and most patients are just taking it out of curiosity, Bogue said, it's still interesting to see the results.

State Urgent Care allows walk-in patients to be tested. The clinic's hours are from 8 a.m. to 7 p.m. every day.