Monday Profile: Johnson recalls life at Starkville High as both student and teacher 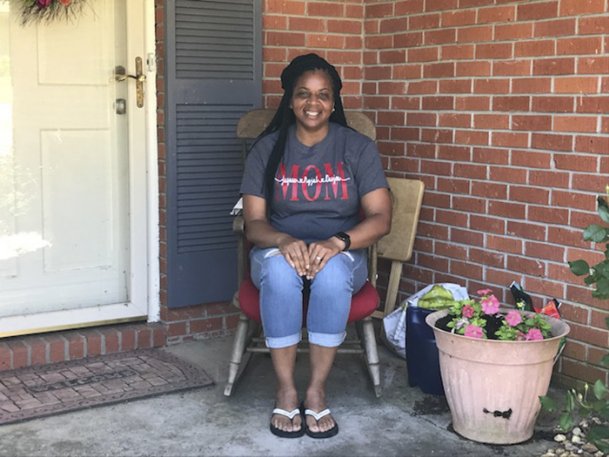 Anita Milons Johnson sits in front of her home in North Starkville Sunday. A 1993 graduate of Starkville High, she returned to her alma mater as a teacher and girls basketball coach in 1998. Photo by: Zack Plair/Dispatch Staff

She had replaced the long-tenured and beloved Frances McCarty, who had retired the previous spring.

But Johnson, who majored in English and minored in Spanish at Ole Miss, had earned her teaching certification through the state's alternate route -- a few teaching-centered courses plus a standardized exam to get her license -- so she had not student-taught or interned before her own name was on a classroom door. Honestly, she recalled, she wasn't sure she knew what she was doing.

"My first year, I was just like, 'Lord, am I doing this right? Do I really know what I'm talking about?'" Johnson, now finishing her 22nd year with the district, said Sunday. "It was just a lot of questioning myself."

As much as Johnson may have doubted, it proved unnecessary.

"She is a wonderful teacher, just like she was a wonderful student," said Sally Warren, who taught Johnson sophomore English and has taught in the room beside hers since Johnson joined the faculty. "She was goal-oriented and confident as a student just like she is as a teacher. She looked at what she needed to do and did it with authority, making the classroom her own in no time. She's a natural."

Warren was just one of the familiar faces with whom Johnson had to forge new relationships. Her principal at SHS when she graduated there in 1993 had become her boss, and many of her former teachers were her coworkers.

"It was hard adjusting from calling the teachers by their last names to them saying, 'Oh no, call me by (my first name),'" she said. "I just couldn't do it."

Because of that, and by function of her also being an assistant girls basketball coach at the school, Johnson refers to most of her coworkers by just their last name.

Most everybody who knows Johnson usually just calls her "Bird."

That nickname came from her father when she was a child, though Johnson said she's never been given a definite reason why. It followed her through high school, where she was a basketball star on nationally ranked teams, and even to Ole Miss, where she played guard for a Rebels program that reached the NCAA tournament three straight years -- once making it to the Sweet 16 during her tenure.

She did all that while raising her first of three children, Jaquez, whom she had a few months after graduating high school and just two weeks before starting classes in Oxford. With a strong family support system behind her, Johnson played out her four years of eligibility and excelled academically -- even as basketball began to slide into a more manageable place in her priorities.

"Basketball was such a big part of my life," said Johnson, who grew up in a family with two brothers who played Southeastern Conference football and another who played some professional baseball. "I played (recreational league), AAU and all the way up. But after I had Jaquez, ... (basketball) wasn't the center of my universe."

Even today, though, basketball remains a huge part of who Johnson is.

When she came to SHS as a teacher, she also was the eighth grade head girls coach. Then she took on the ninth grade team. About seven years ago, she became the assistant for the high school team, the same program she helped take to three state finals as a player, finally winning the championship her junior year. The program had flagged somewhat since, but came soaring back under a coaching staff, led by Kristie Williams, with high expectations and players who all "bought in."

"We raised the expectations, and (the players) came to them," Johnson said. "Everybody doesn't just come to see the boys play. They know the girls are playing, too."

Consistency drives the team's success on the court, the same principle Johnson uses in the classroom, where she teaches junior advanced placement language in addition to sophomore English.

"I listen to my students and I can relate to what they're going through," she said. "I can relate to things that might go over everyone else's head and I can relate to the latest rap song. I try to be a good mixture. And when you are being consistent and positive with students, the difference you make happens naturally, a lot of times without you even knowing it."

Of course, being among the most highly rated high school players in school history gives Johnson some credibility with the current players. She doesn't toot her own horn, but she doesn't have to.

"I don't have to say anything," she said. "They come tell me stuff (they heard I did)."

Johnson still has a little game left in the tank, too.

Johnson earned her master's in secondary education from Mississippi State and will soon finish her specialist certification in educational leadership, something that would qualify her to jump from the classroom to administration.

That could present new opportunities for Johnson, maybe even away from the town she and husband, Terell, call home -- where Jacquez graduated and their two younger sons, Nyjal, 17, and Daejon, 15, attend high school.

"I've worked side by side with her for so long, I can't imagine being up there without her," Warren said. "I've taught two of her kids, and I can't wait to teach her last son if I can hang in there that long. She's my fam."

And for fam, Warren also earns another special honor from Johnson.

"I finally got to where I call her by her first name," she said.