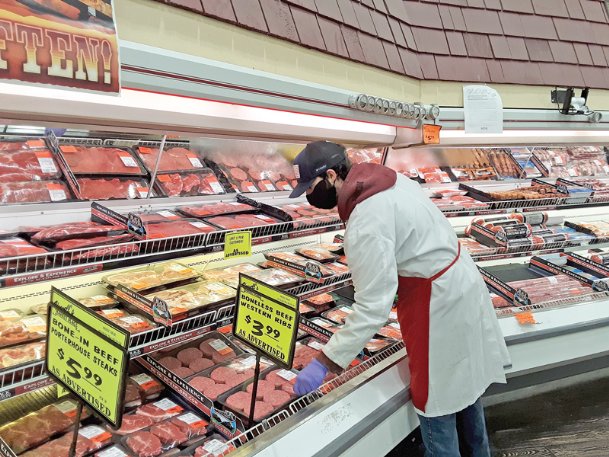 Marshall Kugle, an employee who works in the meat department of Vowell's Marketplace in Starkville, arranges products in his section of the store on Wednesday afternoon. Vowell's, like many other grocery stores in the Golden Triangle and throughout the country, has seen both a shortage of and price increase for some beef and pork products as the COVID-19 pandemic disrupts supply lines, Vowell's store manager Max Stillman said. Photo by: Isabelle Altman/Dispatch Staff

A sign posted in the meat section of a Columbus grocery store alerts customers that the store will limit certain meat products to two packages per customer, due the shortage of goods like beef and pork caused by the disruption to supply lines. Kroger and Food Giant in Columbus and Vowell's Marketplace in Starkville have had to put such limits in place.
Photo by: Isabelle Altman/Dispatch Staff

Jamie Baldwin noticed Wednesday when she went grocery shopping that it was a little harder than usual to "find something worth her buck."

She and her sister Shaquanta Daniels went to Sunflower Food Store off Military Road in Columbus to shop for pork chops, where they struggled to find exactly what they wanted.

"They had bacon and stuff, but (Daniels) was looking for pork chops," Baldwin said. "We couldn't find the juicier kind. They had the real skinny kind, so not any of the bigger kind we usually get when we shop here."

They also noticed prices for some meat products were higher than usual -- and they weren't alone.

New Hope resident Terrie Reed, who said she shops at Sunflower because she knows the meat there is good, had stopped by to pick up some hamburger meat to feed family coming to visit. She noticed the higher price, as did shopper Rita Hargrove.

"As far as the size, it was like $9 for something very, very small that should cost like $3," said Hargrove, who said she tends to shop more for chicken just because she likes it better, but still noticed a steep increase in the price of beef and some other products.

"I'm not a couponer, but I think I am now," she added with a laugh.

As the COVID-19 pandemic causes meat processing plants to shut down, supply lines for beef and pork products especially have been impacted, causing some stores in the area to limit the number of packaged products they can sell to customers and driving up prices.

At Vowell's Marketplace in Starkville, store manager Max Stillman said the store implemented a two packages per customer limit for ground beef, though not for any other meat products. He said a family like Reed's shopping for ground beef is going to see a price increase.

"It's going to be about $4 higher," he said. "Maybe $3 to $4 higher right now. And that's just started this week. Of course it could get even worse because the longer this drags on with the packing plants closing, it does make a strain on us, even though we're buying from six or seven different suppliers. It still causes the cost to go up. As that supply dwindles down, the cost just keeps going up."

Big chains like Kroger are also seeing higher prices and are limiting customers to two packages per visit for fresh beef, pork and chicken.

Most retail managers and owners, like Clint Townsend, whose family has owned Sunflower since 1962, said retailers aren't trying to drive up prices. Because wholesalers who sell to the grocery stores have limited supply, their prices have increased.

"It's hard to say across the board it's been X percent (increase)," Townsend said. "It's all based off demand, so if you've got one particular part of the cow that more people are after, it's going to go up more than another part of it. But we're seeing a dollar to $2 (more per pound) in some cases."

Luckily for Townsend's customers, Sunflower in Columbus hasn't had to implement a limit on how much customers can buy, though Townsend said the managers will if they have to. Neither has the Sunflower in West Point, said store manager Shane Alpe.

"My take on that is I don't know how large someone's family is or who they're buying for," Alpe said. "It's not the customer's fault. It's not our fault, so we didn't see any need to limit. If a family of six comes in, they can't eat the same as a family of two, so they're going to have to buy more, obviously. No reason to make things more difficult on them. Things are hard enough already."

Like Townsend and Stillman, Alpe said the issue stems from supply and demand. Because of the pandemic, production is limited at meat processing plants, which cut and package beef and pork products to distribute to grocery stores. Some of that is because outbreaks among employees have temporarily shut plants down.

Some of it, said Columbus Food Giant store manager Dan Price, is because shelter in place orders throughout the country resulted in restaurants closing or losing a portion of their business, so they didn't need to order as much meat from suppliers. This resulted in the plants scaling back production in anticipation that they wouldn't have as many customers -- a mistake, in Price's opinion, because while restaurants closed down, the people who typically would have eaten there had to shop more at grocery stores.

"The purchases had moved from (the restaurant) sector of the business to the retail sector, and they didn't keep up," said Price, whose store has also limited beef and pork to two packages per customer, though he says it's not very strictly enforced. "... Our business didn't slow down, it multiplied two or three times, and the flow of merchandise just didn't keep up."

He estimates wholesale prices have increased 40 to 50 percent, meaning customers have to pay about that much more as well.

"My percentage may be off, but I know our wholesale prices have gone up tremendously," he said.

The price increase hasn't necessarily deterred shoppers from their usual pork chops and burgers, though.

"If I want it, I'm going to get it," said Larry Shook as he loaded steak and pork chops into his vehicle in Vowell's parking lot Wednesday. "I'm not worried about the price."

Others said they have noticed the price, but keep shopping because they understand the reasoning behind it.

"They've got to make a living too to pay their employees," Reed said. "I don't think it's any higher to the point where it was unreasonable with what I'm shopping for, because it's higher everywhere."

Stillman and Alpe both said they think the increase is likely only temporary, lasting about as long as the pandemic, especially for beef. Because the plants are scaling down production, cattle farmers are holding onto their livestock longer, they said. When the plants start back up, the supply will be higher than usual, and beef will "flood the market," Stillman said.

"As soon as it ends, I feel like the price will drop considerably because there's a lot of meat out there," he said.

Alpe only wishes he knew when that would be.

"We're all looking for some normalcy," he said. "We're taking precautions and we're trying to follow all the laws that are implemented, but we would love to get back to normal."