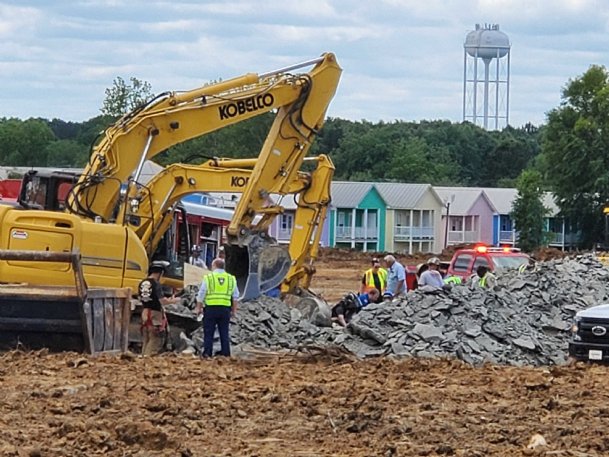 Starkville Fire Department crews and other first responders work to rescue workers from an accident at a construction site on South Montgomery Street, south of the Maison de Ville subdivision, Tuesday afternoon. Two workers for Tuscaloosa-based Southern Civil Contracting were laying pipes for a multi-home development when the trench collapsed, killing one of them instantly. The other died a few hours later, after authorities pulled him out of the rubble. Photo by: Tess Vrbin/Dispatch Staff

Dust rises around emergency responders Tuesday as an Air Care helicopter takes off from a construction site in south Starkville to airlift an injured worker to North Mississippi Medical Center in Tupelo. The worker later died on the way to the hospital. Another worker died on the scene when a trench collapsed on them. Law enforcement officers from the Starkville Police Department, Mississippi Highway Patrol and Oktibbeha County Sheriff's Office, paramedics from OCH Regional Medical Center and firefighters from Columbus Fire and Rescue helped Starkville firefighters free the injured worker.
Photo by: Tess Vrbin/Dispatch Staff

Authorities have identified the two construction workers who died Tuesday in an accident at a multi-home development on South Montgomery Street in Starkville.

Zachary Wayne Osbourn, 36, and William Kezzire, 19, both of Tuscaloosa, Alabama, were killed when a trench collapsed on them while they were laying pipe at the Valentine townhouses construction site at about 10 a.m. Starkville Fire Department Chief Charles Yarbrough said the two were about 10 to 12 feet deep in the ground when the collapse occurred.

"In the 25 years I've been doing this, that's the second (trench collapse) I've ever seen," Yarbrough said. "When they happen, they're devastating."

Yarbrough said Osbourn had already died by the time first responders arrived to the site. An Air Care helicopter airlifted Kezzire to North Mississippi Medical Center in Tupelo, but he died en route.

Both victims worked for Tuscaloosa-based construction company Southern Civil Contracting. Representatives from the company did not respond to messages from The Dispatch by press time.

Yarbrough said it took responders two and a half hours to free the victims from the debris.

Authorities closed the entire block of South Montgomery Street from Lynn Lane to Academy Road and redirected traffic at the intersections during the rescue. Emergency vehicles were parked up and down the street and in the construction site.

Piles of debris that had been forklifted out of the trench could be seen from the street, where reporters were asked to stay, and the crowd of first responders around the trench grew as they completed the rescue.

Representatives from Occupational Safety and Health Administration are still investigating the incident. Authorities do not know yet if charges will be filed in the case.