'Roger the Dodger' signs off: Famed Fort Worth sports writer and Columbus native Roger B. Brown remembered for his charm on and off the field 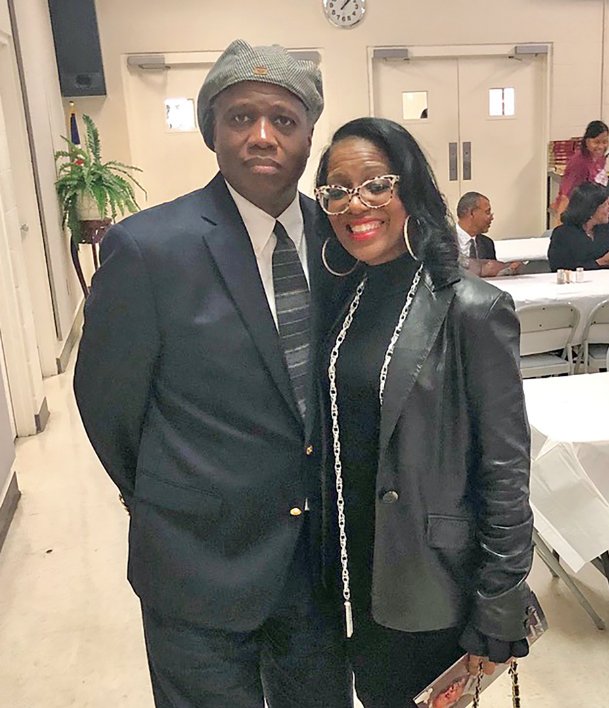 Roger B. Brown is pictured with his sister Alicia Brown Young. Roger B., a Columbus native, became the first ever full-time black sports writer at the Fort Worth Star-Telegram in 1987. Photo by: Courtesy photo/Alicia Brown Young

Roger B. Brown's microphone has been turned off one final time.

A Columbus native and longtime radio personality and sportswriter in Fort Worth, Texas, Brown died Monday at the age of 61.

"He was a great man his entire life and was loved by many," Columbus Mayor Robert Smith, who coached Brown at S.D. Lee High School in the mid-1970s, told The Dispatch. "He was an outstanding journalist that loved to weave the stories of sports and human emotions for every event, every team and every person he covered."

As a child, the future sports columnist was consistently flanked by lifelong friends Leslie Frazier -- now the defensive coordinator for the Buffalo Bills -- and John Brown. The trio spent hours throwing footballs, tossing baseballs and shooting hoops along the street outside Roger B.'s childhood home.

Night in and night out the group played pick-up games in the driveway, shooting toward the rim that hung just above the garage, before the familiar tones of Brown's parents, Charles and Flora, called for them.

"I didn't grow up with a father," Frazier told The Dispatch Wednesday. "His dad became like a father to me. I can't imagine where I would be without his influence. He treated me like I was a son."

Brown's sister, Alicia Brown Young, said kids tended to congregate at their childhood home because their father was a principal and their mother a teacher.

"So our house was like the house that parents felt comfortable with for the kids coming to," she said. "We just all grew up there."

Excelling on and off the field at S.D. Lee High School, Brown, or "Roger the Dodger" as he was dubbed as a prep standout, went on to play basketball and baseball at Tougaloo College -- earning All-Gulf South Conference honors on the diamond between 1979 and 81 and on the hardwood in 1980 and 81.

On-field exploits aside, the Columbus native's literary journey began when he recapped his own middle school baseball games as a freelancer for The Dispatch at a mild fee of $25 per story as a seventh-grader. His official indoctrination into the journalistic world came at Jackson State, where he earned a master's degree in journalism.

Joining the Monroe Star World in 1982 following stints at The Dispatch and The Clarion-Ledger, Brown spent the next five years bouncing from Monroe (Louisiana) to the Valdosta (Georgia) Times and later the Florida Times, covering everything from Grambling State and the New Orleans Saints to the University of Miami and the Atlanta Falcons.

Though the Deep South offered a proving ground for Brown's fledgling sports writing career, it's in Texas that his name gained national acclaim.

Hired in 1987 as the first full-time black sportswriter at the Fort Worth Star-Telegram, Brown covered recruiting throughout his early days in DFW. A promotion to the Dallas Mavericks beat turned into an eight-year spell. A bump to general columnist also followed.

After nearly 20 years in the newspaper business, he pivoted to radio full-time as the calendar flipped to a new millennium. For years Brown had broadcast high school football games off-and-on. He became a regular contributor on the Dallas Mavericks Weekly with Brad Sham between 1989 and 1995.

In 1990, Brown was given a daily show on KKDA entitled "Talkin' Sports with Roger B. Brown" -- a post he'd hold until 2012. He also later joined the KKDA Morning Show with Willis Johnson as a co-host and worked as the station's sports director.

"I am stunned that my Mississippi homeboy is gone," national radio pundit Roland Martin, who worked with Brown at the Star-Telegram and KKDA, said in an interview with the Star-Telegram on Tuesday. "We were colleagues, Alpha Phi Alpha fraternity brothers and dear friends. Roger B. was a consummate professional who was always smiling, laughing, and putting folks at ease."

While Brown's voice will be missed across the airwaves and his final words have now been penned, his memory persists in those that knew him best -- the people of Columbus who spent all those nights shooting hoops on the rim nestled above his garage.

"If you got to know him, you loved him as a friend," Frazier said. "He was just a very competitive guy who had a big heart. I think anybody that knew him remembers that part about him, had a big heart -- just like his family did."