Some area churches prepare to reopen, others not as eager 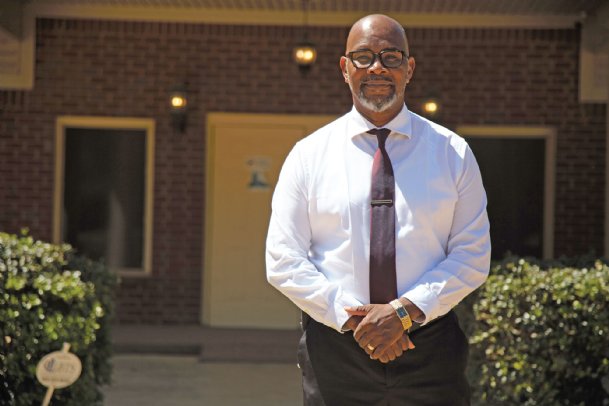 Larnzy Carpenter, lead pastor at First Baptist Church of Longview in Starkville, stands in front of the church building Thursday morning. The church is yet to reopen for in-person worship services, he said, but is planning to do so in July. Photo by: Yue Stella Yu/Dispatch Staff 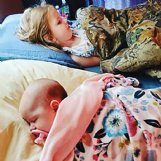 Angelia Collins' daughters, 4-year-old Lacey and her 2-month-old sister, lie in bed on a Sunday morning. If it hadn't been for the pandemic, Collins said, she would already be on her way to the church with her two daughters. Instead, the family has been tuning in to livestreamed services for two months.
Photo by: Courtesy photo/Angelia Collins

Angelia Collins' two daughters lay in bed in their pajamas on a Sunday morning, shoulder to shoulder.

Watching her children, Angelia Collins imagines what would be like if everything had stayed the same. If not for the deadly COVID-19 pandemic, she would already be on her way to church, like she had always been, avidly, since she could remember.

But instead, she has been watching from home livestreamed worship services given by her church, Columbus Church of Christ, for more than two months.

"We miss the routine of getting up and going to church," she said. "It's not easy to watch the television and get the same experience."

Like Collins' church, many churches in the Golden Triangle have chosen to pause in-person worship services and turned to online streaming in the wake of the pandemic.

State and local governments have now left it up to the churches to decide when to reopen out of respect for religious freedom. But many local church leaders still expressed reluctance to reopen for in-person services too soon, citing the rising number of COVID-19 cases in the state and a climbing death toll.

Some churches in the area, however, are devising phased plans to reopen in the coming months, following a series of guidelines from Gov. Tate Reeves on Tuesday, which outlined recommended precautionary measures for in-person church gatherings.

Meanwhile, congregants and pastors are adjusting to the new normal and finding stronger hope amid the pandemic. It is God's plan, some of them said, to help them discover the strength of their faith.

"You miss the love, the hugs, and seeing one another," said Ella Hamilton, 77, of Starkville who attends First Baptist Church of Longview. "But we also have hope and faith in God to know that this, too, shall pass."

Rayfield Evins, lead pastor of Southside Missionary Baptist Church in Columbus, is in no rush to reopen his church.

"You have to look at the science," he said. "The numbers (of cases and deaths) are going up in Lowndes County, Oktibbeha County and the surrounding counties."

Evins sits on the Church and Funeral Homes Subcommittee of Restart Columbus, an initiative launched May 3 for community leaders, businesses and city policymakers to discuss reopening strategies during the pandemic. The group consists of eight subcommittees covering different industries, ranging from barbershops and salons to retail stores.

At a Monday meeting, church leaders on the subcommittee worried the stakes of reopening were too high when the number of infections show no sign of dropping.

As of Friday evening, the Golden Triangle had witnessed 382 cases and 20 deaths, data from Mississippi State Department of Health shows. More than 13,000 had been infected by COVID-19 statewide and 616 had died.

"Before we get to a place and say, 'This is when we will reopen,'" Evins said, "there needs to be a downshift in the numbers."

Moreover, he said, asymptomatic carriers of the virus, who would not be detected by temperature checks, could be deadly.

"Someone could not have a fever and then affect everyone else around them," Evins said.

Todd Matocha, lead pastor at Main Street Presbyterian Church, also is hesitant to reopen, especially considering the health of those who are vulnerable to the virus but who still want to gather in person.

Larnzy Carpenter, lead pastor of First Baptist Church of Longview in Starkville, said he would have to see the daily number of statewide deaths remain below 10 for seven straight days before the church would reopen. The church has moved all its physical activities online.

"I'd hate for anyone to be infected by this dreadful virus," he said. "The most important thing to us is our members' safety."

While some churches hesitate to reopen their doors, others have laid out detailed plans for in-person services following recommendations from the governor on Tuesday.

The recommended measures encouraged congregants to keep a distance of at least six feet while gathering face to face. Church goers are also discouraged from passing along shared objects such as collection plates, microphones and cups.

Church leaders are encouraged to operate at no more than 50 percent of their maximum capacity, deep clean high-touch areas, set up separate services for high-risk congregants, such as senior citizens, and limit the number of entrances and exits to slow the spread of the virus. They are also advised to replace choirs with soloists or organ music and delay Sunday schools and other instructional classes.

Randal Sellers, priest at Church of Incarnation in West Point, said he plans to reopen on the last weekend of May with strict restrictions.

Instead of one big service on Sunday, Sellers said he will break it into five smaller services between Saturday and Sunday, each allowing no more than 10 people in the church at one time.

The church will also require everyone to wear masks, sanitize between services and mark the pews to ensure a social distance of at least six feet, he said. Sunday schools and nurseries remain closed.

Regarding the fluctuating number of cases, Sellers said the fear of the virus would linger for a long time regardless of whether churches choose to reopen. All he can do, he said, is to put rigorous restrictions in place.

"Are there concerns? Absolutely," he said. "Are we addressing those concerns? Also, absolutely."

First Baptist Church in Starkville also announced its intention to reopen for services on June 21, according to an email the church sent to The Dispatch. The church will have two regular services at each of its two locations -- the sanctuary, which houses 200 people, and the warehouse on Jackson Street that houses 120 -- on Sunday morning, the email said. It will also set up a space to offer services to elderly congregants only.

Seating will be marked and congregants will be ushered in, according to the email. Church goers at the sanctuary will be required to wear masks whereas those who go to the warehouse will be encouraged to do so.

'We can find Him anywhere'

For Matocha, the decision to remain shut did not come easy. Missing two months of physical church gatherings, he said, can be hard for some congregants.

"I've had multiple people in the congregation asking when we are going to get back," he said.

Physical gatherings, Matocha said, is a vital element that spells out the nature of church.

"The Christian church is designed for in-person relationships. The word 'church' in Greek means 'the assembly,'" Matocha said. "There is a spiritual element that is missing, and our people feel that, not being in fellowship with each other.

"Preaching is different when it's done to a camera as opposed to a crowd of people," he added. "There is a dynamic of interaction that takes place in preaching God's word that's missing."

Collins said she and her family members miss attending church. Lacey, she said, misses her friends from the church's child care. The family would not refrain from going to church once it reopens, she said.

But for now, Collins said she thinks not being able to attend church might be a lesson -- and a blessing -- from God.

"I think God was trying to get us to slow down a little bit, to make us realize that it's not all about meeting in a church building," she said. "We can find Him anywhere."