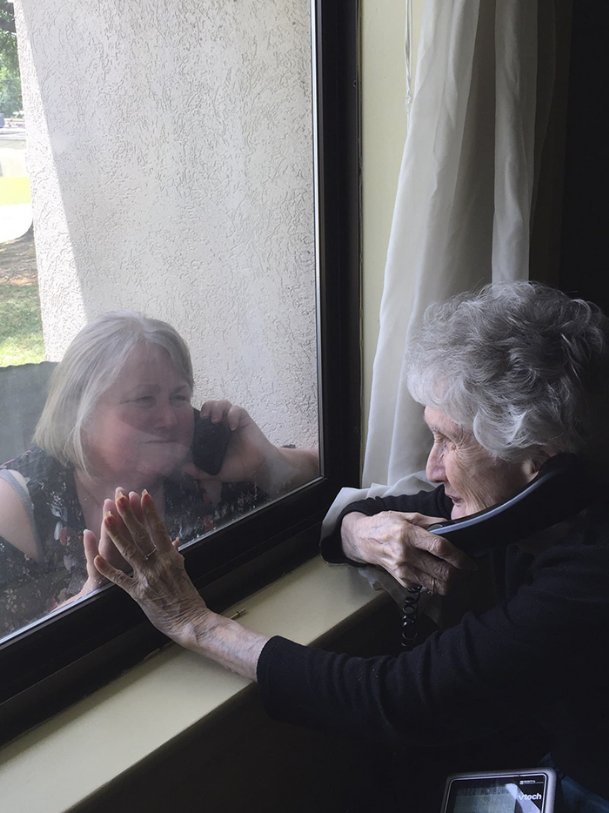 Betsy Brackin, 61, visits her mother, Mary Sue House, under the window outside her room at Trinity Healthcare Center in Columbus on Memorial Day. Brackin tries to come and visit her mother every day, even though the pandemic has forced her to remain outside each time, a window apart from her mother. Photo by: Courtesy photo by Cassie Neal 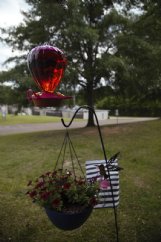 Betsy Brackin set up red petunias outside the window of her motherâs room at Trinity Healthcare Center. Her mother loved gardening and bird feeding before she was admitted to the nursing home, Brackin said, so she placed purple and red petunias outside her room to light up the view.
Photo by: Photo by Yue Stella Yu/Dispatch Staff

Betsy Brackin pressed her face tightly against the double-layered glass window at the Trinity Healthcare Center in Columbus Thursday afternoon.

She squinted her eyes to gaze deeper, until a familiar face emerged from behind the window.

Brackin, 61, tries to visit her mother every day since House was admitted to the nursing home in March 2019 because of deteriorating health conditions. The facility has been under lockdown for more than two months due to the COVID-19 pandemic, but that never disrupted Brackin's routine.

Since the pandemic hit, Brackin never missed one visit except on a stormy day when she was deterred by pounding rain and flashes of lightning. She placed a camping chair under the window outside her mother's room, in case she needed to sit down for longer chats. Separated by the window, the mother and daughter can only hear each other over the phone.

For Brackin, the daily visits are all too familiar.

Brackin used to visit her father every day at the Aurora Health and Rehabilitation Center in Columbus after he was diagnosed with Alzheimer's. Sometimes, she said, she would visit him at 5:30 a.m.

"(That) was the first time we've ever dealt with a loved one being in the nursing home, and I didn't know what to expect," she said. "I went to the nursing home every day back then, just like I do now."

But the disease eventually claimed her father's life in 2008.

"He just got to where he just quit talking. And eventually, he just quit breathing," Brackin said. "That's just the nature of the beast."

Losing her father proved devastating to both her and her mother, Brackin said. Together, the Houses raised nine kids over the years.

So on Thursday afternoon -- the day that marked the 72nd wedding anniversary of her parents -- Brackin made sure to remind her mother of her late husband.

"If he were still around, you'd be married for 72 years," Brackin said.

"You know what he'd say to you? 'Now, Sue. Now, Sue,'" Brackin said, sharing a laugh with her mother.

But that was one of the "good days" when House still remembers. When her memory gets fuzzy sometimes, she forgets how the family arranged for her father's funeral, Brackin said.

As her memories fade, House forgets other things as well. During the pandemic, she sometimes forgets the virus is what's keeping her from going outside and her daughter from coming into the facility.

Often, Brackin has to explain to her mother.

"They'll get over it," House said.

"You don't get over losing your mama," Brackin replied. "We'll keep doing what we did every day."

Being physically separated from her mother amid the pandemic, Brackin said, takes a heavy emotional toll on her.

On Mother's Day, Brackin said, sitting outside that window was all she could do. Sometimes, she said, her younger sister would even be jealous of the nurses who take care of her mother because they can be by her side.

"Other than daddy gone," she said, tearing up, "this is pretty hard. This is real hard."

But whenever she feels sad, Brackin tells herself to cheer up.

"Don't be upset," she said. "There are other people who can't even look at their mom (because) they passed away."

What she wants the most, Brackin said as she choked up one more time, is to be able to hug her mother again.

"She's my mom. She took care of me and she helped me through some rough spots," Brackin said. "My biggest hope is that I'll actually get to go inside and hug her before she passes away. At 86, every day is a gift. My biggest fear is that I won't get to see her again."