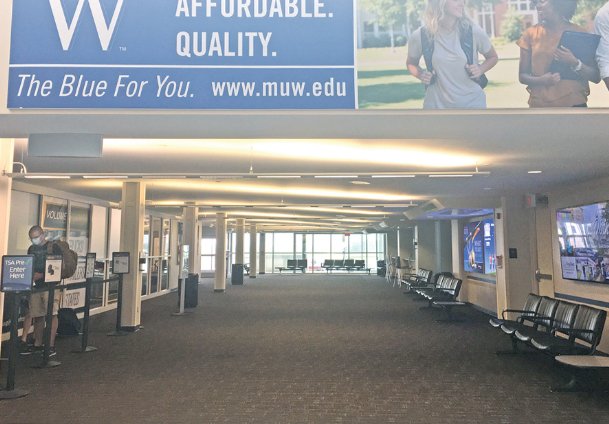 Less than an hour before the only flight of the day at Golden Triangle Regional Airport, very few passengers and staff workers are visible in the terminal. Roughly 12 to 15 passengers a day come through the airport, a slight increase over the average of five to seven about two weeks ago. Photo by: Theo DeRosa/Dispatch Staff

A large section of the main terminal at Golden Triangle Regional Airport sits closed on Tuesday. Executive Director Mike Hainsey said the airport is down to one flight a day from four before the COVID-19 pandemic hit.
Photo by: Theo DeRosa/Dispatch Staff

The first four rows of Golden Triangle Regional Airport's parking area are typically full, but Avis/Budget salesperson Robin Wynn said the lot has been thin during the COVID-19 pandemic. Wynn has been able to snag a "prime" parking spot every day of late.
Photo by: Theo DeRosa/Dispatch Staff 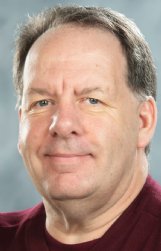 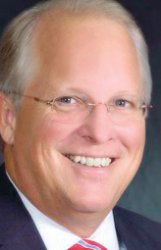 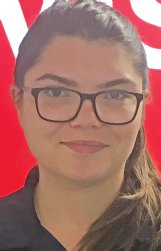 Paul Binford stood on the curb outside the terminal, waiting for a bus that never came.

Binford, an assistant professor of secondary social studies education at Mississippi State, had just flown into Golden Triangle Regional Airport on Tuesday afternoon on his way back from a trip to visit family in Minneapolis, Minnesota.

That morning, he had arrived at Minneapolis-Saint Paul International Airport an hour and a half before his flight took off only to walk through an empty terminal and move quickly through a scarce security line. He saw the same "eerie" emptiness strolling through the typically packed Hartsfield-Jackson Atlanta International Airport during his layover.

Neither flight was more than 60 percent full, and everyone was wearing masks. Attendants passed out hand sanitizer.

"I feel like there's been a little bit of overreaction," said Binford, who noted that the experience was "fine" -- apart from wearing a mask for multiple hours, which grew uncomfortable.

Once he arrived in Columbus on a flight he estimated to have roughly 20 people on it, Binford stood outside GTR's terminal around 2 p.m., the lone passenger hoping to catch the Starkville-MSU Area Rapid Transit bus on its way through.

But no bus came, with pickup from the airport limited to once a day -- around 1:30 p.m. -- due to decreased passenger traffic at the airport. After waiting a while, Binford headed back inside the terminal to rent a car from the Avis/Budget kiosk inside.

Binford's journey was just a reminder that things are far from back to normal at GTR in the face of the coronavirus pandemic. The airport is down to one flight per day from its normal four, and passenger travel is just 10 percent of what it was this time last year.

Typically, nearly 80 percent of passenger travel at the airport is for business, but Hainsey said travelers like Binford make up most of the current populace.

"The passengers we're seeing are ones that have to fly to see family," Hainsey said. "The business community is not traveling yet."

Robin Wynn, salesperson for Avis/Budget at GTR, said the terminal has been fairly empty since the end of spring break at Mississippi State and Mississippi University for Women, when the pandemic first hit the region. Memorial Day weekend, however, offered an increase in volume.

Wynn said 39 rentals have been booked in roughly the past two weeks, a step up from the company's pandemic average of 11 per week before that.

She said before the pandemic, the first four rows of the airport's parking area were always chock full; now, Wynn always lands a "prime parking spot" at the very front of the lot.

According to previous Dispatch reporting, Hainsey estimated in early April that GTR could receive up to $190,000 in aid from the federal government during the pandemic.

But he said Tuesday that the airport received $1.2 million of funding through the CARES Act, significantly more than he expected. The money will fund payroll and regular budget operations, Hainsey said.

"Since it is going to take a while to recover, it'll allow us to still stay in good financial position," he said.

The airport will sustain an estimated $300,000 to $400,000 loss due to the pandemic, Hainsey said, but with the grant, it won't have to tap into roughly a year's worth of reserves.

Hainsey said the money from the CARES Act will be used over the current fiscal year as well as the next one.

GTR's board decided early on not to cut any staff during the pandemic, Hainsey said.

Social distancing measures and sanitation precautions are still priorities at GTR despite the limited passenger traffic.

Though, as Hainsey pointed out, "(i)t's not hard social distancing in the terminal." Fewer than five people filled the spacious gate area roughly half an hour before the only departing flight of the day, the 2:40 p.m. Delta jaunt to Atlanta, left the airport.

But hand sanitizing stations are all around the terminal, and Hainsey -- citing safety as his "No. 1 concern" -- said the janitorial and maintenance staffs are still working hard to keep the airport clean.

"We'll take the measures required and make sure both the people that travel and also our employees, the people that are working there, are protected and taken care of, too," he said.