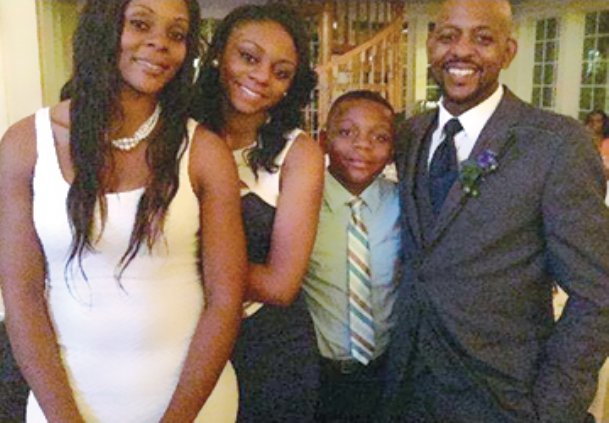 Michael Jones, right, poses for a family photo with his wife, Bethie Jones, left, and his children Taytiyona Tatum, now 21, and Immanuel Jones, now 18. Michael was killed in Bessemer, Alabama last week during an apparent robbery. Photo by: Courtesy photo

What Michael Jones' siblings remember most about him is his smile.

That, and the way he would cock his head to one angle and say their names, said his younger brother Chris Jones.

"That happens every time I see him," Chris said. "And I can't get that out of my head, because he was so friendly. He would always see you and he would smile and lean his head to the side and go, 'Hey, Chris.' Just his smile. He was always happy. ... That's my favorite memory, any time I'd see him smile."

Michael Jones, 45, of Columbus, was killed in Bessemer, Alabama last week in what investigators think may have been a robbery that turned deadly. His family reported him missing on Wednesday, and Bessemer police found his body two days later. He had been shot to death.

The news left his friends and family -- including his wife, Bethie, two children and six siblings -- devastated.

"People are sick with us," said his youngest sister Keisha Jones. "They're hurting with us. It's not just us, it's anybody he touched, anybody that knew him. Everybody knew him."

Michael's mother died when he was a teenager and Keisha just 2, the other siblings all falling in between them. Chris said that's when Michael became like an "extra parent" to the rest of them.

"He had to grow up real fast," Chris said. "... It just extended throughout the last 20 years. He's always been that big brother person we could lean on. And he always did the right thing."

Michael's other brothers, Joseph and Lester Jr., said Michael was the one to offer guidance, and occasionally get the younger siblings out of trouble.

When Chris moved away from Columbus at 19, it was Michael who was constantly putting money on his emergency credit card to make sure Chris had funds.

"Mike ... was able to take out the noise and just point you in the right direction," said Joseph. "No matter what."

Michael graduated Mississippi State University with a degree in computer science and math, his siblings said -- something not many people knew since Michael worked at Steel Dynamics and enjoyed manual labor. He married his wife, Bethie, and the two raised two children: Taytiyona Tatum, now 21; and Immanuel Jones, 18.

In a message delivered to The Dispatch through her sister, Martha Salone, Bethie said Michael will "forever be her sweetheart." She said he always used to watch movies and play games with their children, finding special things to do with them.

"He would hide Easter eggs in so many crazy places, and they just loved it because he would hide money and candy in it," she said. "But (he said) next time, if they thought those places were hard to find, next time he's going to have some even harder places to look for the eggs."

Immanuel called his father a "true family man," and Tatum called him a "gem of a father."

"I wouldn't have traded this man for anything," she said in a message Salone delivered.

Salone said even though Michael was her brother-in-law, he was more like a brother. The two often spent time together watching movies with Michael and Bethie's children, she said.

His hobby was gardening, Salone said.

"He used his hands to plant beautiful gardens," she said. "... We'd pick fresh vegetables from the gardens and make salads and Michael loved that. He was always so proud of his garden. He'd tell everyone, 'You see my garden? You see my garden? Look what I did.'"

His other hobby was finding good deals on second-hand items at trade shows and online. He used to call people to tell them what a good deal he'd found.

It was that love of a deal that led Michael to go to Bessemer on May 20. He was going to buy a phone when he was killed.

Salone said she finds it strange that a hobby Michael loved so much played a role in his death.

"He was always looking for a good deal," she said tearfully.

Michael first went missing early Wednesday morning when he left work at Steel Dynamics at about 6:15 a.m. He didn't arrive for his next shift 12 hours later, which supervisors said was unlike him.

By Thursday, family and friends were circulating posts on Facebook asking for help searching for him. Bethie filed a missing persons report at Lowndes County Sheriff's Office, whose investigators later teamed up with Bessemer Police Department.

"He was led up here to purchase a phone through (an) app," Clemons said. "We did not find his phone or the money he was using to buy a phone ... at the crime scene."

That's what led police to believe he was the victim of a robbery, Clemons said.

There are no suspects in custody yet.

Michael's family members said the news took everyone by surprise. Chris said Michael's supervisor at work called in tears when he learned Michael was missing. Tatum said she received numerous messages of support, and thanked everyone for sending them.

"I can tell you the hardest thing right now is to laugh and joke," he said.

His siblings, in particular, have been working on their own unofficial investigation, feeding every piece of information they think might be relevant to investigators.

"We found him, but we've got to find out why and how," Chris said. "That's kind of what we're focused on. Each other is what we've always had."

The siblings all said they have been keeping in touch more now, planning vacations and ways to spend time in each other's company, not just sending each other messages through a Facebook thread they've had for several years now.

Chris said it's similar to what they went through when they were children when their mother died. Except this time, he and his siblings agreed, Michael isn't here to help them through it.