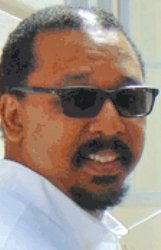 Dr. Anthony Neal lives in Atlanta, but in his role as an assistant professor of philosophy at Mississippi State University he makes the almost 300-mile trip from his home to Starkville twice a week.

On Thursday, Neal was the featured guest in MSU's Institute for the Humanities online interview series hosted by the institute's director, Julia Osman.

In the hour-plus-long interview on the subject, "Experiencing Blackness during the Pandemic," Neal shared his thoughts on COVD-19's unique impact on the black community.

How the black community sees and responds to the virus is not monolithic, he said, based on the differences he sees in his home in Atlanta and his native Mississippi as he travels to MSU on those twice-a-week trips.

"I think the black community in our major cities take (COVID-19) very seriously, more seriously than what I see in rural areas," Neal said. "I think a lot of that has to do with how information is disseminated. In rural areas, people tend to get their news from local TV, whereas in urban areas, people are far more likely to watch the national news and other sources. They're getting updates on our phones all the time and following the news very closely. I think people living in rural areas have less access to information and that shapes their responses."

As a result, Neal said blacks in urban areas are more likely to wear masks, observe social distancing and follow recommendations of health experts than blacks in more rural areas.

Neal said, based on history, COVID-19 could create a backlash against the black community.

Neal said he sees disturbing parallels between today and the Spanish Flu pandemic of 1918.

"In 1895, you had the establishment of the separate but equal policy in America, which established separate hospitals, separate schools and things like that," Neal said. "Lo and behold, in 1918, the flu comes. The flu, as we know now, hit the black community worse than the white community. Why? The infrastructure wasn't there. Black hospitals were overwhelmed. White doctors and nurses wouldn't see black patients.

"You began to see unrest," he added. "In 1919, you start to get this push-back, with poor whites saying black are overusing the resources. The thought is, 'Black people are causing these problems. They have to go.' ... 1919 is what historian Rayford Logan called 'The Black Nadir,' the red summer, the worst year for race relations with all these lynchings."

Neal said history suggests the recent murders of black men Ahmoud Arber in Georgia and George Floyd in Minneapolis may not be incidents entirely unrelated to the current pandemic.

"You see what happened in 1919 and then you see what's happening now," he said. "This is not a new phenomenon. So, today, in the black community it has created almost a dystopian feeling, 'Now, I'm dealing with the pandemic, but I also have to be conscious of these exterior problems as well.'"

To listen to the full interview, go to the Mississippi State University Institute for the Humanities' Facebook page.