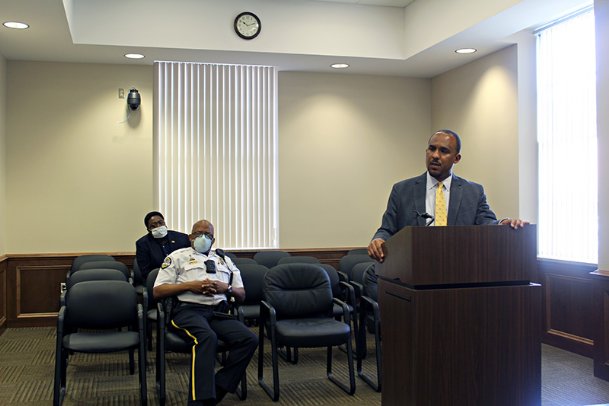 District Attorney Scott Colom criticized the timing and method of Attorney General Lynn Fitch's decision to dismiss charges against a former Columbus police officer who fatally shot an African American man during a traffic stop in 2015 and said he plans to ask her office to release the evidence they have in the case so the public can see for themselves that justice had been served.

Fitch's office released a brief statement Thursday announcing it had dismissed the manslaughter charge against Canyon Boykin, 30, in the Oct. 16, 2015, death of 26-year-old Ricky Ball in North Columbus. Colom said he first learned of the dismissal from "local activists" and then received confirmation from an AG's Office spokesperson the same day the statement was released.

Boykin, who is white, has claimed Ball pointed a weapon at him and that he shot in self-defense. However, neither Boykin nor the other two officers who initiated the traffic stop turned on their body cameras. Investigators later found a weapon at the scene that had been reported stolen from another police officer who responded to the scene after the shooting.

In a press conference Friday morning at Lowndes County Courthouse, Colom said given the national climate -- riots in Minnesota over the death of George Floyd, an African American man who died Monday after a white police officer knelt on his neck for minutes, along with public outrage over the deaths of several other African Americans killed by white law enforcement officers or citizens around the country -- he would have recommended the AG's Office not dismiss the charge at this time, since Boykin is out of jail on bond.

He added he also would have asked prosecutors make their evidence and reason for dismissal known to the public, saying "we deserve more than a two-paragraph press release."

"The problem with that is it's done in the dark," Colom said. "So now people don't even know what the reason is that you dismissed the case. They don't get a chance to examine the evidence for themselves, they don't get a chance to make their own decision about whether this was an independent judgment, whether it was based on the facts of the law."

He emphasized he is not critical of Fitch's decision to dismiss the case and that evidence may show prosecutors at the AG's Office had an ethical reason for doing so. However, since the case never went before a jury and since it was not dismissed in a public hearing, the public does not know that for sure.

Colom said he hopes to receive a response from Fitch's office as soon as possible and that when he receives the evidence in the case, he will make it public. He added he does not know of a legal reason why the evidence will not be released now that the case has been dismissed.

The AG's Director of Communications Ray Coleman told The Dispatch in an emailed statement that prosecutors informed Colom, Boykin's attorney, Ball's family and Lowndes County Sheriff Eddie Hawkins of the decision to drop the charges before filing with Lowndes County Circuit Court. (One of Boykin's attorneys, Jim Waide of Tupelo, previously told The Dispatch he learned of the dismissal from the media but that Boykin's other attorney, Jeff Reynolds of Jackson, had been in touch with prosecutors at the AG's Office.)

"We understand that the DA indicated in his press conference that he will be writing the Attorney General and we look forward to receiving his request and working with him to get him what he needs," Coleman said in the email.

His email did not answer questions The Dispatch asked about why the charge against Boykin had been dismissed or whether the case is dismissed with prejudice -- meaning Boykin cannot legally be charged in the case again -- or without prejudice, meaning the case could go before a grand jury again if investigators uncover new evidence.

Waide previously told The Dispatch prosecutors never had any evidence to contradict Boykin's claim that he shot Ball in self-defense and that Boykin was indicted because of killings like that of George Floyd in Minnesota.

"It's troubling to see this situation in Minnesota, which just about beats anything I ever saw," he said. "But it's small wonder to me that officers get indicted, given what the community can see is happening to various black people. ... Canyon was a victim of it all."

A Lowndes County grand jury indicted Boykin for manslaughter, and he was served the indictment in September 2016, about three months after Colom had announced he was turning the investigation over to the AG's Office, then under the direction of Jim Hood.

Colom said at Friday's press conference that he had met with Hood's prosecutors prior to turning the case over to them and that he trusted they would follow the evidence. However, those prosecutors are no longer with the AG's Office since newly elected Fitch took over in January.

He said many people he had talked to in the community, including Ball's family, were upset about the news.

"I thought the best way somebody put it to me is they felt like it was a gut punch to their stomach," Colom said. "They don't know why it's a two-paragraph press release, no explanation as to why after four years, you've had the case for four or five months and you've reached a different decision."

"It was heartbreaking, even though our family trusts that it's not over," she told The Dispatch during a two-hour demonstration held outside Leigh Mall on Saturday. "... It was really hurtful that (the AG's Office) would take that route and not inform the family, but at the same time we keep trusting God that he's going to have the final say and turn everything around and that justice will prevail."

'A roadblock' to building trust in community

Columbus Police Chief Fred Shelton, who was patrol captain at the time of Ball's shooting, attended Colom's press conference Friday. He told The Dispatch afterward that his department has been trying to rebuild trust between officers and the community over the last few years.

"We're going to continue to earn and regain the people's trust, and we see this as a roadblock to that," he told The Dispatch. "... We want them to understand that they can trust us, and we're going to do our jobs. We'll present the evidence in the cases to proper authorities, and then we're going to follow the legal process."

He said he met with CPD's command staff Thursday evening and formed an emergency response plan in case of public unrest in the wake of the AG's decision and said they would "monitor the situation." He has delegated one officer to just monitor social media.

Shelton said he did not plan to have extra police presence in the area near 21st Street and 14th Avenue North, where Ball was shot. He did have extra officers patrolling the city, he said, including command staff, but that has been a regular occurrence since the COVID-19 pandemic began.

As of press time Saturday, there had not been any instance of retaliatory violence related to the news of the dropped charges. So far, the only mass demonstration had been Saturday's peaceful protest outside the mall.

Shelton said given the national climate, he wanted his officers to be prepared and protected.

"There's a great concern for law enforcement officers and our safety when dealing with the public," he said. "We want the public to trust us. ... If the public feels like if an officer does something they're not going to be prosecuted, ... then how can people trust you? So I'm asking people to support us and trust us, but that has to go both ways."