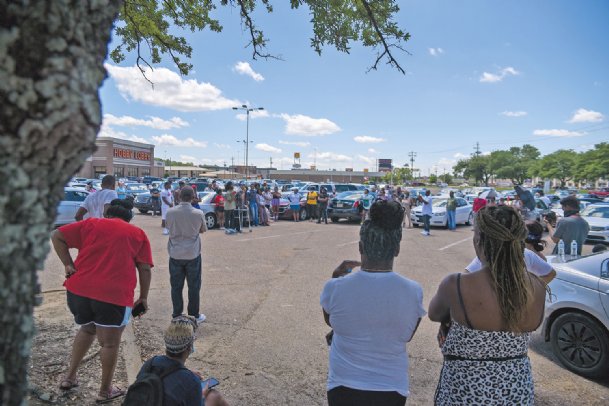 A crowd of roughly 250 people, some standing in a loose circle and others listening from their cars, gathered near the main entrance at Leigh Mall Saturday to protest Attorney General Lynn Fitch's decision to drop the manslaughter charge against former Columbus Police Department officer Canyon Boykin in the 2015 shooting death of Ricky Ball. Photo by: Deanna Robinson/Dispatch Staff

Protest organizer David Horton holds the speaker as District Attorney Scott Colom speaks to the crowd Saturday at Leigh Mall. Colom told the crowd of 250 that he regretted the decision not to prosecute the Ricky Ball case himself. On Thursday, the Attorney General's Office announced it had dropped the manslaughter charge against former Columbus Police Department officer Canyon Boykin in the 2015 shooting death of Ball.
Photo by: Deanna Robinson/Dispatch Staff

When David Horton heard the news Thursday that the Mississippi Attorney General's Office had dismissed the manslaughter charge against former Columbus Police Department officer Canyon Boykin in the 2015 shooting death of Ricky Ball, he started driving.

Horton, 29, grew up in Columbus and moved to Atlanta three years ago to pursue his music career. On the trip back to his hometown, he decided to stage a protest at Leigh Mall on Saturday morning and spread the word on his Facebook page with no idea what the turnout might be.

Saturday, from 10 a.m. until 12:45 p.m., Horton -- who identified himself only as "just a man with a microphone" -- invited protesters to peacefully express their feelings not only about the handling of the Ricky Ball case but the rash of other violent and unprovoked deaths of black men that sparked protests across the country.

Near the main entrance of Leigh Mall, Horton took the microphone to express their feeling before a crowd that has swelled to about 250, some standing in a loose circle, others listening from their cars.

For Horton, whose grandmother lives on the Northside street where Ball died, the Ball case weighed heavy on his mind and prompted him to organize the protest.

"The motivation came from me deciding that I just didn't want to sit back and let somebody else make decisions for me, especially if I disagree with those decisions," Horton said. "I wanted to allow the Attorney General's Office and the justice system of Mississippi to continue with the process and wanted to trust in the government to serve justice. I don't believe that took place. I believe a man was murdered in cold blood. If it's murder, there should be justice."

Horton said he plans to remain in town until Tuesday to collect signatures for a petition he intends to send to the Mississippi Supreme Court asking for its intervention in the Ball case.

While many in the crowd, like Horton, were keenly aware of Ball's story and the five-year journey through the justice system that appears to have ended abruptly and without satisfaction for many, others were drawn to the bigger picture of violence against blacks -- sparked most recently by the Monday officer-related death of George Floyd in Minneapolis, for which several police officers were fired and one has been arrested.

"I'd never heard of Ricky Ball until just a couple of days ago," said Tanisha McCoy, 39, who moved to Columbus from the Delta a year-and-a-half ago.

McCoy took the microphone to urge unity and love in the black community as well as reaching out to the white people who can be allies.

"I wanted to let people know we have to stand up together," she said. "You don't want to hate the next person. We want to come together so we can join with white people or whoever is needed to stop injustices for all people, not just black people. All this has to change. It just has to."

Arthur Harris, 30, said he joined the protest as his commitment to change.

"It's time for some real change to happen," he said. "We have a lot of things going on in our city. This is the right time, the right opportunity to come and voice our opinion without causing any type of disruption.

"It's more than Ricky Ball, because there are more lives that have been taken," he added. "I think people have been oblivious to the fact that black lives don't matter. Well, (they do) matter. I feel like America is just sweeping the situation under the rug and moving forward."

Among the crowd were a handful of city leaders, including Ward 4 Councilman Pierre Beard, Police Chief Fred Shelton and District Attorney Scott Colom, who told the crowd he regretted his decision to turn the case over to the AG's Office instead of prosecuting the case in his office.

"I was disappointed and frustrated, just like you all," Colom told the crowd. "What I can tell you right now, had I known what would happen, I wouldn't have done it this way. The people I turned the case over to, I trusted. In hindsight, that was a mistake.

"Probably, I lost the trust of some of you out here. But If I wasn't here, I'd be a coward," he added. "I want you to know that if any of you want to come and work with me to make our criminal justice system better, I'm here to work with you because it doesn't stop with Ricky Ball."