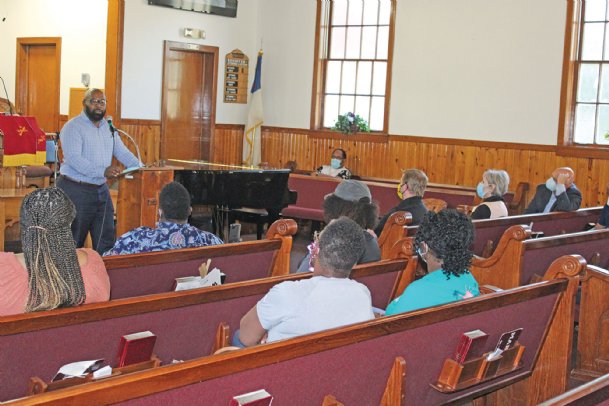 State Rep. Cheikh Taylor (D-Starkville) speaks to a crowd of 100 people at Second Baptist Church in Starkville on Sunday evening in preparation for a protest against systemic racism and the deaths of African Americans at the hands of police nationwide. The protest is scheduled for Saturday, and Taylor will lead a second protest training session at SBC today at 5:30 p.m. City leaders including Police Chief Mark Ballard, Mayor Lynn Spruill and Ward 4 Alderman Jason Walker, from right in the front row, attended Taylor's presentation. Photo by: Tess Vrbin/Dispatch Staff

State Rep. Cheikh Taylor (D-Starkville) does not want the city he represents to end up on CNN this weekend.

Taylor emphasized the importance of peaceful demonstration to a crowd of about 100 people at Second Baptist Church on Sunday evening, the first of two presentations for local activists to be prepared for a protest, scheduled for Saturday, against systemic racism and the deaths of African Americans at the hands of police nationwide.

On May 25, a black man named George Floyd was killed by a white Minneapolis police officer who kept his knee on Floyd's neck for almost nine minutes. The officer has since been charged with third-degree murder.

A video of the incident has circulated on social media and reignited the Black Lives Matter movement, which began in 2014 after the death of Michael Brown in Ferguson. Some of the protests have resulted in destruction of property by the protesters, while others have been escalated by police aggression.

Taylor said protest is necessary for marginalized voices to be heard, but the work does not end when the protest ends. The goals of the activist group, called #StarkvilleStandUp on social media, include creating a citizen-led police review board and cultural sensitivity training for all employees of the city and the Starkville-Oktibbeha Consolidated School District.

"There are catchphrases, there are hashtags, but the most effective protest actually ends in legislation," he said.

He showed the audience a video with instructions to recruit people in advance, bring signs to the protest and be respectful to bystanders, law enforcement and the news media. He told The Dispatch that Monday's session will cover historical examples of successful nonviolent protests.

Several elected officials -- District Attorney Scott Colom, Mayor Lynn Spruill, and Aldermen Sandra Sistrunk of Ward 2, Jason Walker of Ward 4 and Hamp Beatty of Ward 5 -- sat in the front row for Taylor's presentation. Starkville Police Chief Mark Ballard sat near them and, upon request, addressed the audience and said he has made it clear to his officers that what happened to George Floyd will not be tolerated.

Ballard said Floyd's death "hopefully changed the momentum of law enforcement" and holding police accountable for their actions. He also said the movement for change "is being derailed" by agitators.

"Deliver your message and keep it very simple: don't hurt others and don't hurt property," Ballard said. "If you think you need to burn a police car, I get it for the symbolism, but that's not good work."

Taylor pointed out that the audience, although mostly black, included several people of other races, and he said everyone arrived because they are "sympathetic to the cause." Oktibbeha County NAACP President Yulanda Haddix agreed.

"This room is full of everyone who says, 'I hurt when you hurt and I want to rectify that,' so we can all work together and we can win," Haddix said.

Paulette Ferguson told The Dispatch that Floyd's death felt like "another slap in the face," and she appreciated the opportunity to not only protest in Starkville but to have training beforehand.

"I think the fact that we have the chief of police and the mayor here, that's all positive and it means we're all in this together," Ferguson said. "I realize things can happen, but I think the more you plan, the better things can go."