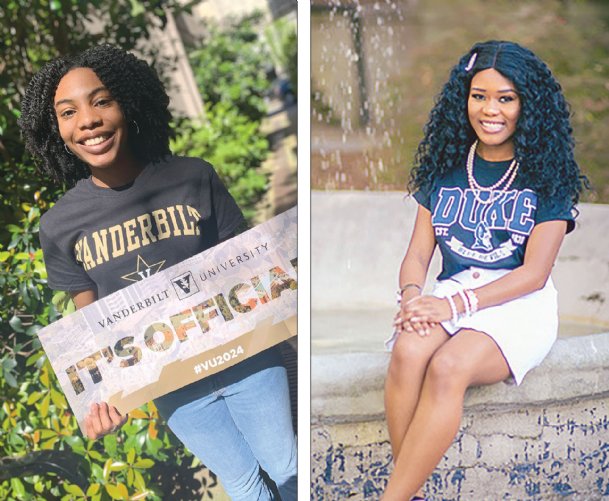 Tierah Macon, left, graduated from the Mississippi School for Mathematics and Science this spring and is headed to Vanderbilt University. Essence Hughes is headed to Duke University on a four-year full scholarship thanks to the QuestBridge National College Match. Both attended Columbus Municipal School District before rooming together at MSMS. Photo by: Courtesy photos/Tierah Macon/Essence Hughes

Essence Hughes wanted to venture out and try new opportunities.

And now the motivation that kept the two high-achieving Columbus students together will pull them apart.

Friends since middle school, Macon and Hughes both attended Columbus High School, and they've studied and roomed together at the Mississippi School for Mathematics and Science for the past two years. The pair even started a friendly sort of competition when it comes to graded assignments.

"If I ever scored higher than her, I would always joke that I was gonna hang it up on my fridge," Hughes said.

Macon said the academics-focused atmosphere at MSMS brought out that competitive side of both of them -- and drew a connection in the process.

But with their senior year over and college a few short months away, Macon and Hughes are ready to move on to the better things they've been waiting for. Starting with the fall semester, Macon will head to Vanderbilt University in Nashville, Tennessee; Hughes will attend Duke University in Durham, North Carolina.

Both schools are among the best in the country: Duke tied for No. 10 in U.S. News and World Report's national rankings for 2020, while Vanderbilt tied for 15th. (Score one for Hughes' fridge.)

For both students, seeing what the other achieved means a lot.

"It was really great because we started the whole MSMS process together," Hughes said.

She'll be attending Duke for free thanks to the QuestBridge National College Match program, which awarded more than 1,000 full four-year scholarships to low-income high school seniors this academic year.

Hughes found out Oct. 16 she was named a finalist in the program and would receive the scholarship; just after Thanksgiving break, she found out that she'd matched with Duke.

Hughes, who will major in global health and public policy (on the pre-med track) said she loved Duke's school spirit, even though she hasn't been on campus yet. She planned a visit, but it was canceled due to the COVID-19 pandemic; Hughes will see her new home for the first time in August.

Macon is in a similar situation, having to scrap a visit to Nashville to see the campus for the first time. She said she wants to go this summer before school starts so she doesn't get confused.

In the meantime, whenever Macon has questions, she can hit up Kymbria T. Thomas, who graduated from MSMS a year ahead of her and attends Vanderbilt, on FaceTime. It's a way for Macon to orient herself with the school she chose over Mississippi State, Southern Miss, Swarthmore College, Alabama-Birmingham and Sewanee: The University of the South.

"I've wanted to go there for a long time," Macon said of Vanderbilt.

After perfecting her application and sending it in with just a day to go before the deadline, Macon received an email from the school's MOSAIC program for students from various minority backgrounds as well as getting an admissions package from the university in the mail.

Both yielded the same message: Macon was in.

"I was super excited," she said. "I was really shocked."

Macon said that while her family and friends kept telling her she would be accepted, she always had her doubts.

Macon, who wants to become a surgeon, said she plans to major in biochemistry or pursue a degree in Vanderbilt's medicine, health and society program. A soccer star with the Blue Waves, she also hopes to play on an intramural soccer team, become a member of different service clubs and possibly join the Black Student Association. (Macon was a member of the Black Student Alliance at MSMS.)

Macon -- the first person in her immediate family to attend a four-year college, let alone a school of Vanderbilt's renown -- knows MSMS has prepared her well for the successful future she is prepared to enjoy.

As both she and Hughes get ready to head off into their next chapter, Macon said she was happy to see how far the two have come together -- and what they will achieve apart.