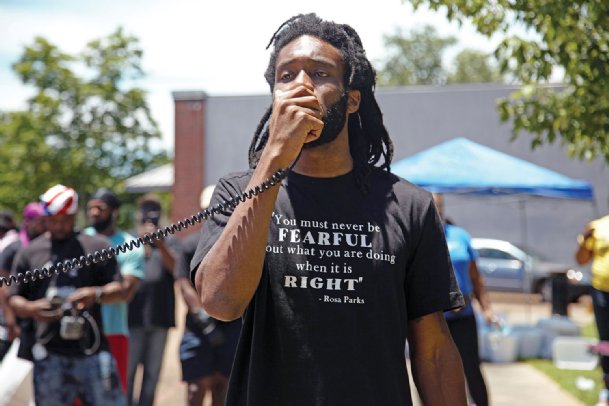 David Horton, of Columbus, holds up a megaphone to address a crowd of roughly 150 protesters in front of the city's police department Monday afternoon, demanding justice for Ricky Ball, a black man shot and killed in 2015 by white former police officer Canyon Boykin. The protest came days after state Attorney General Lynn Fitch dropped the manslaughter charge against Boykin and dismissed the case with prejudice. Many protesters criticized the timing of the dismissal, which coincides with the police killing of George Floyd in Minneapolis, an incident that has sparked national unrest. Photo by: Yue Stella Yu/Dispatch Staff

Nick West, of Europa, holds up a sign that says "All lives can't matter until black lives matter!!" in front of Columbus Police Department Monday afternoon. He was one of the few white protesters at the demonstration. West said he drove to town in solidarity with David Horton and was surprised that there weren't more whites joining the cause.
Photo by: Yue Stella Yu/Dispatch Staff

A crowd of roughly 150 protesters gather in front of the Columbus Police Department Monday afternoon demanding justice for slain Ricky Ball. At the protest, dozens of demonstrators signed a petition asking state Attorney General Lynn Fitch to overturn her decision to drop the manslaughter charge against Canyon Boykin, the white former police officer who killed Ball, a black man, in 2015.
Photo by: Yue Stella Yu/Dispatch Staff

Dressed in a bright yellow T-shirt, Arthur Harris stands filming among the protesters Monday afternoon. It is scary to be a black man in the community, Harris said, and it is traumatizing for him to see unprovoked black deaths over the years.
Photo by: Yue Stella Yu/Dispatch Staff

Sweat was pouring down David Horton's forehead under a scorching sun as the temperature in Columbus reached 90 degrees Monday afternoon.

Crowds gathered around him. Cars flew by him, some honking in support.

So he kept on rallying.

Holding a megaphone and standing among a crowd of roughly 150 demonstrators in front of the city's police department headquarters, Horton, a Columbus native, demanded justice for Ricky Ball -- a black man who was shot dead on Northside in 2015 by white former CPD officer Canyon Boykin after Ball ran from a traffic stop.

"Canyon Boykin is a racist murderer, Columbus," Horton spoke to the crowd. "And if you allow that, you too are a murderer. What would you do for your children?"

The protest -- the second of its kind in just three days and conducted peacefully -- came after state Attorney General Lynn Fitch's decision to drop the manslaughter charge against Boykin and dismiss the case with prejudice, which means Boykin cannot be legally charged in the case again. Fitch's office announced the dismissal in a brief press release Thursday.

"The only reason I could imagine to dismiss with prejudice is if the AG determined Boykin was in fact innocent, rather than a lack of evidence," said local District Attorney Scott Colom in a Facebook post Monday. He has asked Fitch's office to release evidence to the public.

"They plan to cooperate and give me the file by the end of the week," Colom said. "I plan to release it to the public as much as I can, as quickly as I can."

Petition for a change

On Monday afternoon, dozens of protesters joined Horton in calling the dismissal unjust as they signed a petition Horton initiated to allow the state Supreme Court a chance to review the case.

"The goal is for Attorney (General) Fitch to overturn her ruling into dismissing this case without prejudice so we can take it to Supreme Court Justices," Horton told The Dispatch Monday.

The next steps, he said, would be to march to Fitch's office with the petition. If the case enters federal Supreme Court, he said, he would mobilize his community to march in Washington, D.C.

At the event, Horton also called for voter registration among blacks to elect more African Americans to office.

Tanzania Black, a Columbus High School teacher and Horton's friend, helped register voters as the demonstration took place, which she believes would help address racial injustice in the long run.

"Voting is making sure we put people in office that support us, (that) they are willing to fight for us when things like this happen," Black said.

Nick West, a Europa native who registered to vote and signed the petition, was among a handful of white protesters Monday afternoon. He said he drove to Columbus in support of Horton's efforts defending black lives.

"I'm surprised that there's not more (white protesters), to be honest," West said. "But I came to make a statement and I feel like I did."

During the event, he held up a sign with "All lives can't matter until black lives matter!!" written in all caps on it.

"If it's a cop versus a black male, the cop is going to win every time," West said.

Ward 4 Councilman Pierre Beard, who participated in the protest, said he also signed for the petition.

For many protesters, the Ball decision points to a larger systemic problem as violence against blacks continued to brew over the years. The dismissal coincides with when the death of George Floyd, a black man in Minneapolis, at the knee of white police officer Derek Chauvin, has sparked national unrest.

"For eight minutes, 46 seconds have you seen the heartlessness, the hatred, evil spirit of a man and his cowardly associates as he knelt on the back of the neck of an African American citizen in this country," Horton said, "while he yelled out repeatedly, 'I can't breathe. Someone help me, please, I can't breathe.'"

Unlike Floyd, Ricky Ball's death was never recorded on video as Boykin did not turn on his body camera during the incident, he said, and the truth of his death could never be known. Boykin has claimed he shot Ball in self-defense, and a gun was found near Ball's body.

"He didn't deserve to be murdered like an animal in cold blood," Horton said. "But here we are, imagining, wondering, wishing we could prove the truth."

And it's not just Floyd and Ball, Horton said, referring to the killing of Trayvon Martin, a black teenager, in Florida in 2015 by a man of mixed race; and the death of Ahmaud Aubery, a black jogger, who was shot by a white father and son in Georgia this year.

"There are so many like (them) slain in the name of white supremacy, superiority, ideology," Horton said.

Arthur Harris, who participated in the Saturday protest as well, said the ongoing violence against blacks makes him feel unsafe as a black man.

"I don't want to get pulled over by the police ... and labeled as 'one of those black guys,'" Harris said. "It's scary to be in the community. It's very traumatizing to see that somebody of your same skin color get shot and killed for nothing."

Belinda Morris, founder of My Life Matter Ministry in Columbus, said the community has been aching for too long and it is time for a change.

"It's real when black families lose their children," she said. "That pain is real. That loss is real. The devastation of never having that love again is real, and it warrants the attention of all."

For Horton, the path toward change must come in several steps. Members of the black community, he said, should first set aside internal discord and come together to address the bigger problem of racism.

"I'm asking all internal disputes for the black community to be placed on hold until the true problem ahead is dealt with," he said. "We should refuse to engage in any quarrel or debate amongst each other, especially in public demand."