Best of both worlds: Economic experts say solar projects are good for environment and industrial development 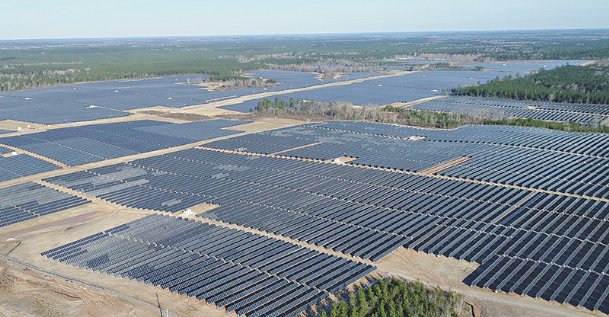 Florida-based renewable energy company Origis Energy has built solar energy facilities near Hattiesburg, shown in this courtesy photo, and has announced it will build another in Lowndes County, which is expected to begin producing power in 2022. Origis representatives, as well as representatives from the Tennessee Valley Authority and Golden Triangle Development LINK, say solar and other forms of renewable energy are economic drivers as well as being good for the environment. Photo by: Photo courtesy Origis Energy

But that's starting to change - in the Golden Triangle and throughout the rest of the Tennessee Valley and the country.

"I see a greener energy in the future of our country and the TVA," said Tennessee Valley Authority spokesperson Scott Fiedler. "Nearly 60 percent of all the energy we generate right now is carbon free. That includes not only our renewables, but also nuclear power."

Earlier this year, Tennessee Valley Authority awarded a contract to Florida-based renewable energy company Origis Energy to build a 200 megawatt solar facility on 1,900 acres in Lowndes County just west of the Infinity Megasite. The facility, which will also have the capability of storing about 50 megawatts, is expected to begin producing energy for TVA in 2022.

But economic experts hope Origis will be the first, rather than the only, such project in the Golden Triangle.

Higgins said the LINK is currently working with three or four other solar companies whose representatives have varying degrees of interest in locating a project in the area. One of those companies is specifically looking at about 2,000 acres each in Oktibbeha and Clay counties. The supervisors in those counties have passed notices of intent to issue fee-in-lieu agreements, which would exempt the company from paying property taxes for a certain number of years in exchange for a fee paid to the county, if the company decides to build a facility there.

Fiedler said the benefits to solar and other forms of renewable energy are more than environmental -- they're economic.

"What we're seeing is businesses and industries not only have profitability goals, they have sustainability goals," he said. "Once you move into a TVA territory, with our carbon-free generation, you've just eliminated over half of your carbon when you're using TVA electricity."

Higgins and Fiedler said one industry where companies are particularly interested in solar energy is hyperscale data centers from major tech companies, which provide hundreds of jobs to the area where they're built. Both Google and Facebook are currently building such centers in Alabama, though some construction has been temporarily halted due to the COVID-19 pandemic.

But hyperdata centers aren't alone, Higgins said -- the "Walmarts of the world" are increasingly interested in renewable energy as well.

More than 70 percent of Fortune 500 companies have published sustainability goals pledging to offset their carbon footprint with renewable energy sources, according to Johan Vanhee, Origis' chief commercial officer and chief procurement officer, in an email from Origis spokesperson Glenna Wiseman to The Dispatch.

"They are looking to source their energy needs from new renewable energy generation facilities," Vanhee said in the email. "Those companies are now in the process of further sourcing their equipment, raw material and services from suppliers that support the same sustainability goals and energy procurement strategies. This triggers a widespread waterfall of interest from the commercial and industrial markets to look for regions in our nation with excellent availability of additional renewable energy resources."

Fiedler says TVA wants to be one of those regions.

"TVA is a leader in solar energy and we're always looking for additional sources, not only to make the environment or our communities a better place to live through a lower environmental impact but also to drive jobs and investment into the Tennessee Valley," he said. "So we get the best of both worlds: we get a good place to live and we get high-paying jobs."