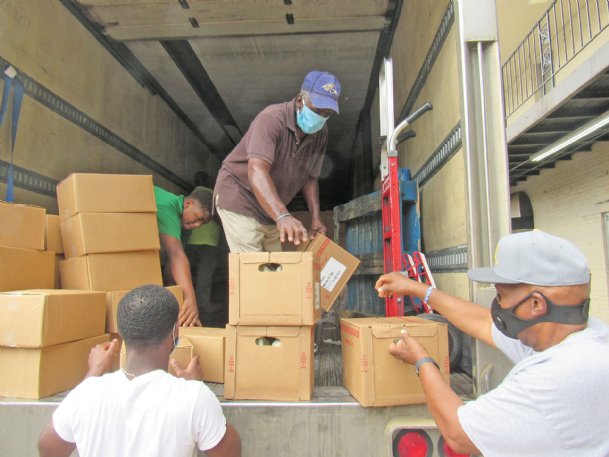 Volunteers from the Oktibbeha County NAACP and the Southern Foundation for Homeless Children in Starkville unload milk from trucks during Wednesday's milk and produce distribution in the parking lot of Spiller Furniture in Starkville. The milk and produce was provided under a USDA program initiated in response to the COVID-19 pandemic. Photo by: Slim Smith/Dispatch Staff

Willie Watt of Sturgis waits in line to pick up milk and produce in the parking lot of Spiller Furniture in Starkville Wednesday morning. The distribution is part of a USDA feeding program initiated during the COVID-19 pandemic. The event was organized by the Southern Foundation for Homeless Children and the Oktibbeha County NAACP, which passed out more than 1,000 face masks during the event.
Photo by: Slim Smith/Dispatch Staff

By 9:30 Wednesday morning, a line of about 60 cars were aligned in serpentine fashion in the parking lot of Spiller Furniture in Starkville.

They had arrived at the scene to collect free face masks, milk and produce at an event co-sponsored by the Southern Foundation for Homeless Children in Starkville and the Oktibbeha County NAACP, but a half-hour after the 9 a.m. event had started, the line of cars remained at a standstill.

Willie Watt, who made the drive over from Sturgis, didn't seem to mind the wait, though.

"It probably takes a little while to get everything unloaded," she said. "I don't mind. I'm just grateful they are doing this. It really helps."

Watt, 66, said the effects of the COVID-19 pandemic have created some food security issues for her. Wednesday, she picked up a gallon of milk and a 10-pound box of produce.

In her case, a little means a lot.

"I've really had to be careful and watch things (so) I don't run out of food," she said. "This gives me a little more food, enough so that I don't run out."

Wednesday's event was the third week in a row the Southern Foundation for Homeless Children (SFHC) in Starkville has distributed food provided through the USDA's "Food Box" program. The program was started to help vegetable and dairy farmers avoid wasting food that, because of transportation issues caused by the COVID-19 pandemic, can't be sold.

USDA purchases the milk and produce, then distributes it across the nation through partner organizations such as the SFHC.

Gwendolyn Gray, CEO of the SFHC in Starkville, said the program has been a huge success, based on her observations during the last three weeks.

"Today's we're providing over 850 boxes of produce and 900 gallons of milk," Gray said. "It will be gone in a couple of hours, just like it has been the last two weeks. There's definitely a need for it. You can tell by the response."

In addition to providing the products to those who drove to the event, 10 area churches were provided milk and produce to distribute in their neighborhoods.

Wednesday, the Oktibbeha County NAACP used the event to distribute more than 1,000 face masks to people arriving to pick up the milk and produce.

"There's definitely a demand for masks," said NAACP chapter president Yulanda Haddix. "Now that things are opening up, the need for masks is only going to increase. We're happy to do this for our community."

Haddix said the masks were provided by the National NAACP and distributed to chapters throughout the country for distribution.

What masks were left after Wednesday, Haddix said, will be distributed Saturday at a planned march for racial justice in the wake of George Floyd's death in Minneapolis.

"We'll still have another 500 masks to pass out," she said. "We plan to be at the march on Saturday, so we expect to give out a lot of masks there."