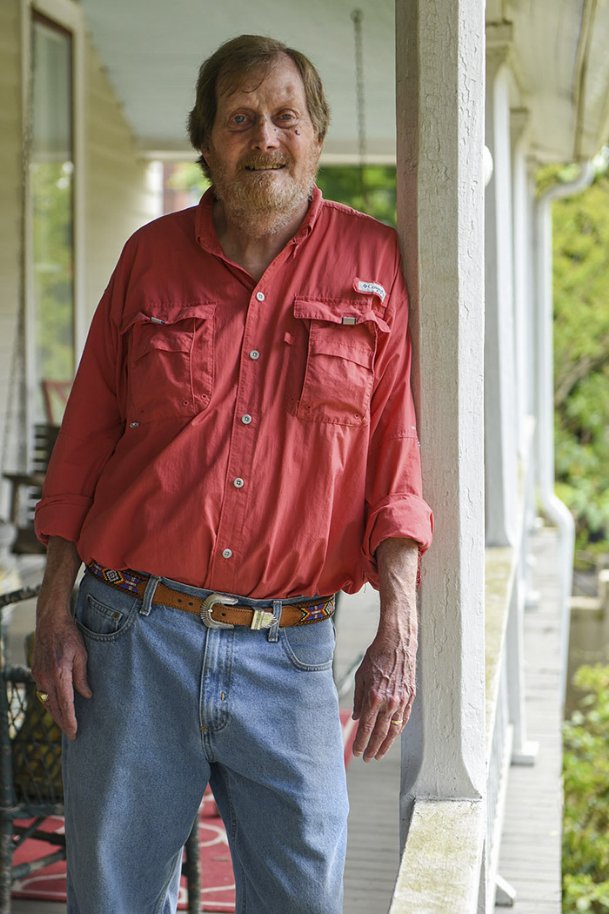 Rufus Ward holds a spittoon that belonged to John Quincy Adams on Thursday in his home in Columbus. The spittoon was gifted to Wardâs grandmother in 1910 from one of Adamsâs descendants. The Adams were going to throw it away because it had cracked, but Wardâs grandmother glued it back together and it has been in her family ever since.
Photo by: Claire Hassler/Dispatch Staff

Rufus Ward doesn't just write and lecture about history. He lives and breathes it.

His family is connected to one of the most prominent families in Lowndes County history, and Ward is widely known as the most authoritative voice on the history of the area, the unofficial historian of Columbus.

Born on the sixth anniversary of D-Day, he turned 70 on Saturday. He's authored two books of history, been the co-author or contributing author on three others, written more than 500 history columns published in The Dispatch and has been the go-to source for innumerable newspaper and magazine pieces, including a New York Times section-cover story on the origins of Memorial Day.

His home on College Street, Ole Homestead, built in the 1820s, is the oldest known surviving structure in the original city limits and one of the oldest homes in North Mississippi. It is filled with historical artifacts, including a spittoon once owned by John Adams, the second president of the United States, and an original Matthew Brady photo from the 1850s used as the model for the portrait of the family patriarch Thomas C. Billups, which hangs over the mantle. There are also original sketches from Columbus native Josh Meador, one of the artists who worked on many of Walt Disney's early classic films.

Although not formally trained as a historian -- he was an attorney for 35 years, retiring in 2009 -- history has always been his passion and almost every casual conversation turns quickly to history.

Ward has so much history, both personal and regional, he's compelled to share it.

"I've given a lot of the family records to the (Columbus-Lowndes Public Library) and a huge collection, over 1,200 documents, to Mississippi State and some documents to the Mississippi Department of Archives and History," Ward said. "I try to put it out there so people can use it."

At a time when the subject of racial injustice, a theme throughout the sweeping history of the nation, is dominating the national conversation, Ward's connection to that history has provided most of what he calls the most rewarding -- and painful -- contributions.

Through his family records, Ward has been helping black citizens trace their own roots -- a man who has so much history, providing it to those who have very little.

"The genesis of that was that I found the Billups family plantation records, including information about the slaves," Ward said. "It contained births, marriages, all kinds of information, something a lot of people didn't know about. I wanted to get it out there."

Mona Vance, archivist at the Columbus-Lowndes Public Library, said such records are vital for black citizens as they try to discover their family histories.

"Rufus is a great example of this. It's not just his family's history that is contained in those documents, it's the community's history," she added. "Our history is intertwined."

Over the years, Ward said he's lost count of the number of black residents who have used his family records to discover their family histories.

"Probably the most interesting and rewarding moment to come out of all that happened a few years ago," he said. "Mona called from the library and said a black family from New Orleans was there interested in genealogy. The lady's great-great-great grandfather had been a Billups slave. She asked if I could come help them access family records.

"When I got there and was introduced, the lady started laughing," he added. "I said, 'You obviously know something I don't know.' She said her father's name was Rufus Billups."

While talking with the woman, Ward learned she and her family had always been interested in -- and placed importance on -- education.

"That made me recall something I had come across years before," Ward said. "After the Civil War, an educator from the North had come down to set up a school. In his diary, he wrote about telling the plantation owners that they had an obligation to provide an education to their former slaves. He also wrote that Col. Billups had set up a school, but he was the only plantation owner in the area who had done that."

The lady from New Orleans shared something else: Rufus Billups went on to become the first black general in the United States Air Force.

Even so, exploring that part of his family's history is not always easy.

"The slave stuff makes me uncomfortable, but there it is," Ward said. "If it can help someone to learn about their own family, it's something I want to do."

"Rufus, like it is with many families, has stories that have painful chapters," Vance said. "But we can't shy away from that and hide it, which was something that happened for years and years in a lot of families.

"But when you recognize it, stare it in the face and say, 'This isn't something I'm proud of, but it's important,'" Vance added. "For so many generations, history was only about the white man, predominantly in terms of wars and politics. But when people share these stories, we begin taking a more holistic approach by looking at history from all genders, backgrounds and races to tell everyone's story, not to glorify the things that are negative, but to study them, to learn and grow from them."

As a historian, Ward recognizes the importance of sharing the full story.

"History isn't all good and it isn't all bad," Ward said. "It's both. Whether it's good or bad, there's a story there and a lot of times, it's an important story."