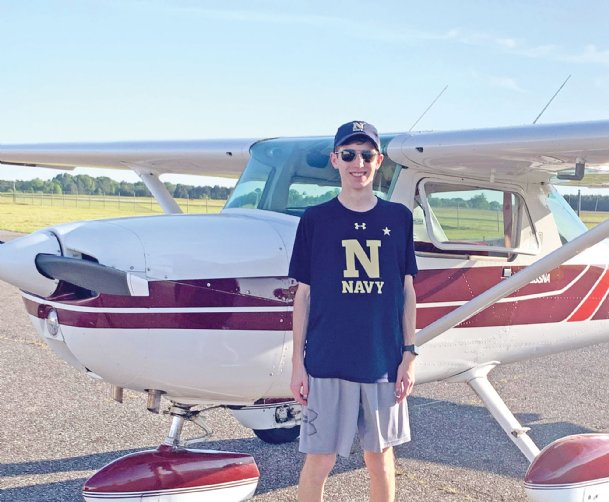 Starkville native Tyler Highfield received a $10,000 scholarship from the Aircraft Owners and Pilots Association last week. The money will be put toward training en route to earning Tyler's private pilot certificate when he turns 17. Photo by: Courtesy photo/Mike Highfield

A teenager's 16th birthday is typically an important milestone.

That held true for Starkville native Tyler Highfield. Only his big moment didn't take place in the Department of Motor Vehicles.

After about 20 hours of instruction with Circle S Aviation in Starkville, Highfield successfully navigated his first solo flight on his 16th birthday on Oct. 3, 2019. Because a person can't fly solo until they're 16, Highfield was so amped up about getting to the airfield that he didn't mind putting his driver's license on the back burner.

"I flew a plane by myself before I could drive by myself," Highfield said. "That's pretty crazy. ... So far it's probably one of the coolest moments of my life."

The milestone was a figurative lap around Cloud Nine, considering the soon-to-be junior at Starkville Academy dreamt about being a pilot since he was 6 years old. But good luck trying to figure out where his love of the sky originated.

No one in his immediate family is a pilot, nor can Highfield pinpoint exactly where his fascination with planes started. Ironically, his father, Mike, would much rather stay firmly on the ground. In the middle of an airborne experience with Tyler and his instructor a few years ago, nerves got the better of the elder Highfield, leading to the flight ending prematurely.

But the younger Highfield has a burning passion for all things aviation, nevertheless.

Tyler received a bit of good news last week, being selected as one of 80 high school students nationwide to receive a $10,000 scholarship from the Aircraft Owners and Pilots Association (AOPA) 2020 High School Flight Scholarship Program. The money will be put toward training en route to earning Tyler's private pilot certificate when he turns 17, meaning he could have other people in the plane alongside him.

"It's not only helpful to him, but helpful to our whole family," said Shelley Highfield, Tyler's mother.

"I was really excited and really surprised as well," Highfield said. "Ten-thousand dollars, that's a lot of money. For someone wanting to donate that to you is a surreal experience."

'She was a really big influence on my training'

Tragedy struck the Starkville community on July 6, 2019, when 18-year-old Lake Little was killed after crashing a single-engine airplane she was flying solo on the grounds of the University of Mississippi golf course.

Little went to school with Tyler at Starkville Academy, and the pair played on the same tennis team and attended the same youth group together. But they both shared a love of aviation.

While attending Little's funeral, Tyler spoke with Lake's father, David. The elder Little told Tyler not to let Lake's accident deter him from his dreams of becoming a pilot.

"That meant a lot to me as a dad that he said that," Mike said. "Because honestly, that's always in the back of my mind every time he's in the air."

A future of flying

"My parents bought me a flight lesson for a Christmas gift," Tyler said. "After the first flight, I was hooked on it."

Since his first experience in the air, Mike estimates his son has spent about 100 hours in the cockpit of an airplane.

He has a lot more planned in the future.

"Something that makes us confident in him continuing to fly is that he loves it so much and that he does want to pursue it as a career," Mike said. "We see this as an investment in his career choice, and a lot of times that's not something you can do at 15 or 16 years old."

Before he graduates high school, Tyler hopes to receive his commercial license, meaning he can be paid to fly.

Upon graduation from Starkville Academy in two years, Tyler hopes to attend either the Naval Academy or the Air Force Academy for college to pursue a career in aviation in the military.

"It's totally different when you're up there," Tyler said of the experience of flying. "You see the world from an entirely different point of view. It's something most people don't get to experience, but once you do experience it, you're hooked on it and you can't give it up."