Eliza Boyd has 15 different varieties of soaps and three kinds of bath bombs, which she sells each Saturday at the Starkville Community Market.
Photo by: Photo by Slim Smith/Dispatch Staff 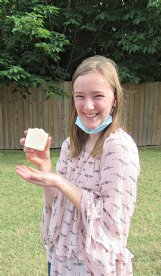 Staff Eliza Boyd originally started making goat milk soap a year ago, because she had read it soothed eczema and her seven-year-old sister has eczema.
Photo by: Photo by Slim Smith/Dispatch

In 1918, America faced its greatest pandemic, the Spanish Flu outbreak, which ultimately claimed 600,000 lives in the U.S. Yet while the nation's understanding of viruses at the time left the nation vulnerable, in one sense it was better equipped for a public health crisis than the COVID-19 virus we face today.

Back then, in an era before refrigerated trucks and interstate highways, the food supply was almost exclusively locally-produced. That was especially true in rural areas. People of that era knew how to grow their own food, sew their own clothes and provide for themselves other necessities not readily available in their community.

One of the challenges of COVID-19 has been to the nation's food supply, which has struggled with production and transportation to meet the demands of the public.

For more than a dozen years, Alison Buehler of Starkville has been on a crusade to help Mississippians reclaim those lost skills, most recently as director of the Homestead Education Center, which has been providing workshops, exhibitions and seminars since 2012. For all those efforts, few things have spiked the interest in the self-sustaining lifestyle Buehler has preached than COVID-19.

"I've seen more gardens here in the Starkville area this spring than I have in 20 years," Buehler said. "With the shelter at home orders, people were home more and had more time to learn the things that we've been teaching for years."

Buehler's mission is not only to help Mississippians produce more of the foods and products they consume, but develop a healthier lifestyle in the process.

"I think because of the coronavirus, people are more aware of the food chain, where things are coming from. What they are discovering is the closer our food supply is to us, the more simplified it is. And when you grow your own food, you know what's in it. I think that appeals to a lot of people. They're becoming more aware."

For some, it goes beyond growing their own healthy food to meeting a specific need and even turning it into a business venture. Eliza Boyd is a great example of that.

Boyd, 15, lives near Starkville at her family's eight-acre farmstead. The family of eight grows their own fruits and vegetables, harvests eggs from their chickens and has adopted a self-sustaining lifestyle. A year ago, Eliza added her own wrinkle.

"I was reading about goat milk," she said. "One of the things I read said that goat's milk was very good in treating eczema. My little sister had eczema pretty bad. So that's when I got the idea. My dad got me a book about goat's milk and I did a ton of research. I decided to try it.."

Boyd bought a pair of goats with her own money and began producing goat milk soap. At the time, helping her sister was the main motivation. Now, a year later, it's progressed beyond that.

"It's a pretty complicated process and it's not cheap to make," she said. "In addition to lye and goats milk you have a lot of different oils that are used. Each oil has its own properties and uses. It's a lot of chemistry and a lot of calculations just getting the formula right. Too much lye and it burns the skin. Too little and you have liquid soap. If you don't have the right amount of an oil, you don't get the benefit of it. It took a lot of time to get it just right."

The actual soap-making takes about an hour, but the soap requires six to eight weeks to cure and set up enough to be cut into individual bars.

She sells her soap at farmers markets in Columbus and Starkville and even though she's learned volumes about how to run and operate a business, she still views it as more or less a hobby.