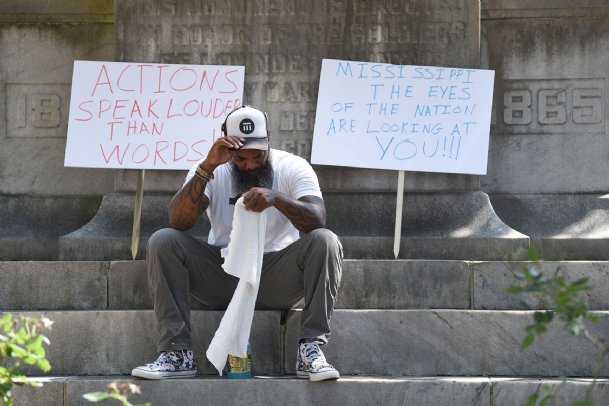 John Lewis takes a break from protesting near the Confederate monument that stands on the Lowndes County Courthouse lawn on Monday in Columbus. Lewis was born and raised in Columbus but now lives in Texas. He returned to Columbus on Wednesday and said he is not leaving town until the statue is removed. "Change starts from home," Lewis said. Photo by: Claire Hassler/Dispatch Staff 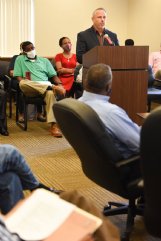 Bishop Scott Volland asks the county board of supervisors to consider relocating the Confederate monument that stands on the courthouse lawn during a board of supervisors meeting on Monday at the Lowndes County Courthouse. "When we as a society no longer care about what offends our fellow citizens," Volland said, "then all of a sudden we become the very thing that we claim to hate."
Photo by: Claire Hassler/Dispatch Staff 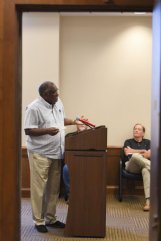 District 5 Supervisor Leroy Brooks moves for the Confederate monument to be relocated from the courthouse lawn to Friendship Cemetery. "We don't like what it stands for and what it reflects. We don't want our children and grandchildren growing up to have to come and see the same thing," Brooks said.
Photo by: Claire Hassler/Dispatch Staff 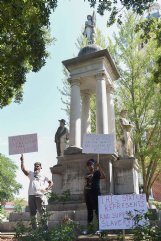 From left, John Lewis and Sonniah Ramirez, 12, protest for the removal of the Confederate monument that stands on the Lowndes County Courthouse lawn on Monday in Columbus. Lewis was protesting by himself when Sonniah approached him. "Can I hold a sign with you for 30 minutes?" she asked, and then the pair stood together.
Photo by: Claire Hassler/Dispatch Staff 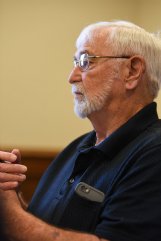 District 1 Supervisor Harry Sanders listens as Bishop Scott Volland asks the county to consider removing a Confederate monument from the courthouse lawn during a board of supervisors meeting on Monday. Sanders proposed that instead of relocating the statue, they compromise by adding onto the monument to address slavery. Later, Volland said that what Sanders didn't realize is that relocating the statue already was compromising.
Photo by: Claire Hassler/Dispatch Staff 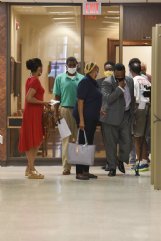 Community leaders who support the removal of the Confederate monument from the courthouse lawn leave after supervisors voted 3-2 to keep the statue on Monday at the Lowndes County Courthouse. As they were leaving, Bishop R.J. Matthews said that the supervisors who voted to keep the statue, who are all white, are "on the wrong side of history."
Photo by: Claire Hassler/Dispatch Staff

Bishop R.J. Matthews looks at Bishop Scott Volland as he speaks during a board of supervisors meeting on Monday at the Lowndes County Courthouse. Even though the supervisors voted to keep it, Matthews said the movement to remove the monument is nowhere near over. "We'll be back," he said.
Photo by: Claire Hassler/Dispatch Staff 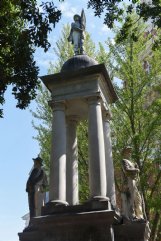 A monument honoring Confederate soldiers stands on the Lowndes County Courthouse lawn on Monday. The monument was built in 1912.
Photo by: Claire Hassler/Dispatch Staff

Sonniah Ramirez, 12, observes as John Lewis points out an angle from which a Confederate soldier on a monument looks like a hooded Klansman at the Lowndes County Courthouse on Monday. Sonniah said she wanted to join Lewis in protesting for the removal of the monument because she's tired of seeing people mistreated because of their skin color.
Photo by: Claire Hassler/Dispatch Staff

The Confederate monument in front of Lowndes County courthouse will stay in place, following a 3-2 vote by the board of supervisors Monday morning against its relocation.

The motion to relocate the century-old monument, made by District 5 Leroy Brooks, failed to carry after Supervisors Harry Sanders, Trip Hairston and John Holliman -- the three white supervisors -- voted to reject the measure, following heated clashes between Brooks and Sanders over the handling of the monument.

Advocates for relocating the monument, such as Bishop Scott Volland of The Heights, argued at the meeting the monument glorifies slavery and is insensitive to the black community. Supervisors who were lukewarm to the idea, however, told The Dispatch they voted against it because the monument preserves history that needs to be remembered.

"We haven't had slavery in the United States for 150 years," Sanders told The Dispatch Monday morning. "Why is it still an issue?"

The vote upset many citizens in attendance who supported the relocation, such as Volland, Lowndes County NAACP President Lavonne Latham Harris, State Rep. Kabir Karriem (D-Columbus) and Nadia Colom, wife of District Attorney Scott Colom. Upon hearing the vote, many of them shook their heads and exclaimed: "Again, wrong side of history."

The monument at the courthouse, erected in 1912, honors Confederate soldiers who fought in the South during the Civil War as "our heroes." The inscription deems the history a "sacred heritage" and described the war as a "noble cause." On top of the monument is a stone statue of a soldier holding a flag in his left arm.

Brooks, giving his motion to remove the courthouse monument to Friendship Cemetery -- where both Confederate and Union soldiers are buried -- said such a structure in front of the courthouse poorly reflects on a county that should consider all of its citizens equal. He also made reference to a longstanding local legend that if one views the statue from the east, the soldier looks like a hooded Klansman.

"We are not trying to change history, we are just trying to rechannel some things that are offensive to people," he said. "We are not saying tear it down, we are saying relocate it, so when people come to the courthouse and they look at it from a certain angle, they don't see something that looks like a Ku Klux Klan."

Sanders disagreed, at first offering an alternative motion to include a more comprehensive history at the courthouse monument. He later withdrew it.

"You don't solve any problem other than the fact you get it moved from one place to another," Sanders told The Dispatch. "I think that we don't want to do away with history, and we need to be reminded of some atrocity that happened. If we are not reminded about it, we are going to have a tendency to forget it and (the history) is going to repeat itself."

He further dismissed the protest against the monument as "problems" addressed by the black community, who he said have remained "dependent" since slavery. He referenced other ethnicities living in America who he felt had better "assimilated" to society even after mistreatment -- such as Irish, Italian, Polish and Japanese residents.

"We didn't do the Japanese right here in World War II, we put them all ... in a concentration camp and everything and nobody said a damn word about it today. Are the Japanese all upset about that, burning stuff down and all that? No," Sanders told The Dispatch after the meeting. "They've (been) assimilated into the country and they are doing fine. The only ones that are having the problems: Guess who? The African Americans. You know why?

"In my opinion, they were slaves. And because of that, they didn't have to go out and earn any money, they didn't have to do anything," he added. "Whoever owned them took care of them, fed them, clothed them, worked them. They became dependent, and that dependency is still there. The Democrats right here who depend on the black vote to get elected, they make them dependent on them."

Disappointed, but not disillusioned

Removing the monument is a goal shared by many protesters, such as David Horton, as they conducted weeks of peaceful protests in the city against racial injustice over the police killing of George Floyd in Minneapolis last month and that of Ricky Ball in Columbus in 2015. For the Ball shooting, Mississippi Attorney General Lynn Fitch dismissed a manslaughter charge in late May against former Columbus police officer Canyon Boykin.

In a June 9 town hall meeting, Horton called for local leadership support to remove or relocate Confederate monuments in the county and join a bipartisan statewide effort to rid the Mississippi flag of its Confederate emblem.

Volland, echoing Horton's appeal, urged the board of supervisors Monday to relocate the courthouse monument to a cemetery or a museum meant to "memorialize history." In its place, he said, the county can establish a monument that documents a more comprehensive history.

Although he recognizes the historic value in the current monument, Volland said, it does not represent all lives that were lost in the war.

"There were many more lives that were affected and/or taken, many more freedoms that were infringed upon by the defense of that Confederacy and what it stood for," he said. "It should be a monument that is not simply reflective of the Confederacy, but all lives, be (they) slave or free, all lives we do claim to be created equal."

Moreover, Volland said, by clinging onto the history where the Confederacy fought to preserve slavery, the monument is an offensive symbol to the black community.

The issue over the monument, he added, is not one between black and white, but one about "human decency."

District 3 Supervisor John Holliman shared Sanders' view, arguing the history was worth preserving. Many of his constituents, he said, urged him to vote for the monument to stay.

Volland told The Dispatch he is "somewhat disappointed but not disillusioned" by the board's decision. Changing entrenched beliefs, he said, can be hard.

"Some still waters run deep," he said. "When you stir up those waters, it begins to bring to the surface many deep-rooted feelings, many deep-rooted fears, many misunderstandings and mistrusts that have been perpetuated throughout history."

But the community will keep advocating for the cause, such as writing letters to supervisors and signing petitions to make a change, said Pastor R.J. Matthews of Kingdom Vision International Church.

Karriem told The Dispatch he hopes Sanders, Hairston and Holliman reconsider their vote.

"It's very discouraging, but this is a time for this body to go back, have a conversation and take the next steps in this community for action," he said.