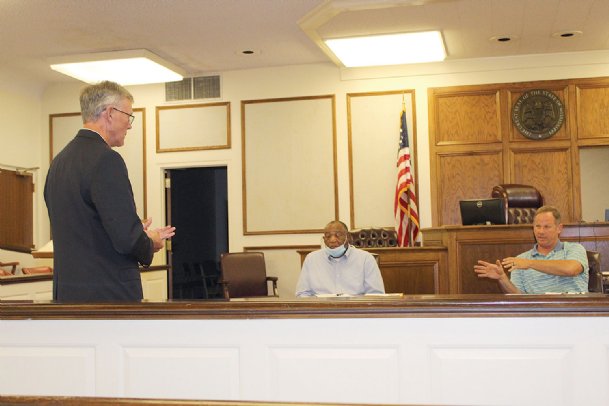 District 1 Supervisor and Board President John Montgomery, right, and Tombigbee River Valley Water Management District executive director David Kennard, left, discuss the county's new membership in the flood control agency at Monday's board of supervisors meeting. The agency completes a few projects in all its member counties every year on a north-to-south rotation, Kennard said. Photo by: Tess Vrbin/Dispatch Staff

The water management district does flood control, cleanup and repair projects on waterways of all sizes in 12 northeast Mississippi counties, with Oktibbeha soon to be the 13th.

"We've got responsibilities in Kemper County all the way up to Alcorn County, so we're spread out," Kennard said. "What we normally do is start in the north, in Alcorn County, and we'll take care of two or three projects per county as we move south."

The district completes the rotation at least twice per year, works on projects each county deems most important and only deviates from its plans if bad weather creates a flood risk and requires workers to move to higher ground, Kennard said.

Flooding and drainage issues have been a priority for the supervisors due to heavy rains over the past several months, and the board voted 3-2 in May to join the district, which includes a $133,000 annual membership fee. District 1 Supervisor and Board President John Montgomery and District 4 Supervisor Bricklee Miller both voted against joining the agency, citing their concerns that Oktibbeha County would be low on the agency's priority list and that it would take workers years to get to the county's drainage projects.

The board agreed in May that Hollis Creek, which is partly in Miller's district, is a serious problem due to the buildup of debris and subsequent flooding of residential areas in southern Starkville and Oktibbeha County. Miller asked Kennard if the water management district is allowed to expand a creek, and Kennard said the district does not have permission to do so and would clear out the debris instead.

The district also is not equipped to haul away the debris it removes from ditches and creeks, so the landowner is responsible for what to do with the debris, Kennard said. The district can go on private property to clean up creeks, something the county cannot do without previous consent from property owners.

The board and Gov. Tate Reeves will each appoint a member representing Oktibbeha County to the water management district board. Property taxes fund the services, and Oktibbeha County does not need to increase millage rates in order to receive them.

Supervisors will also consider an ordinance at its next meeting to reduce the number of false alarm calls to county fire departments, after county fire services coordinator Patrick Warner told the board there have been more than 30 so far this year.

"That's thirty-something times the fire trucks pull out of the station, and that's gas we have to pay for, and for nothing," Warner said. "It's also a liability issue. Every time you drive the fire truck down the road on an emergency call, it could be something bad."

Most false alarms come from apartment complexes that do not keep up with the electrical maintenance requirements of security systems, Warner said, so security companies have stopped doing business with the apartments and no longer take responsibility for false alarms.

Warner said he will most likely issue three warnings before enforcing the fine, with an amount yet to be decided, that the board will pass in July.

Montgomery and Miller both said they would support the ordinance.

"You cry wolf so many times that when there's truly a fire, that's when the true impact would happen, because somebody says, 'Oh, it's just that fire alarm again' and just roll over, and that's how they could get hurt or killed," Montgomery said.