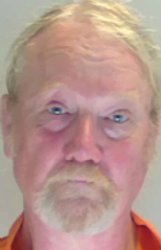 Protesters at a demonstration against the Confederate monument outside the Lowndes County Courthouse yell at law enforcement officers and an individual who approached the crowd while appearing to be armed.
Photo by: Isabelle Altman/Dispatch Staff

Khariya Blanchard, 13, of Columbus, holds a sign that says "I (We) Can't Breathe," a reference to George Floyd's last words as former Minneapolis police officer Derek Chauvin knelt on his neck until he died last month, during a protest outside the Lowndes County Courthouse Saturday morning. A crowd of about 100 people gathered to protest the Confederate statue outside the courthouse and Lowndes County Board of Supervisors President Harry Sanders who earlier this week told a Dispatch reporter that black Americans had been "dependent" since slavery. Blanchard is the daughter of Ashley Hackman, right.
Photo by: Isabelle Altman/Dispatch Staff

A man, armed with a rifle and handgun, was arrested Saturday after he disturbed a protest of the Confederate monument outside Lowndes County Courthouse.

Columbus Police Department Chief Fred Shelton said the man, Teddy Billingsley, 61, of Columbus, was arrested on charges of public drunkenness and disturbing the peace. Both charges are misdemeanors.

"There was a person who walked into the crowd with a long rifle and handgun," said Shelton, who arrived shortly after two CPD officers had detained the man. "Him and some of the people got into a dialogue and he started giving them the (middle) finger. At that time, the officers removed him from the area."

The Confederate monument on the courthouse grounds has been an open source of controversy lately, especially in the wake of the police officer killing of George Floyd in Minneapolis grabbing national headlines and Mississippi Attorney General Lynn Fitch dismissing a manslaughter charge against white former Columbus police officer Canyon Boykin in the 2015 fatal shooting of Ricky Ball, a black man.

Lowndes County supervisors voted 3-2, along racial lines, last week to leave the monument at the courthouse rather than move it to Friendship Cemetery, where both Confederate and Union soldiers are buried.

Ricky Butler, one of about 100 protesters Saturday who began gathering at the monument around 9 a.m., said the protest had been peaceful until Billingsley's arrival.

"There wasn't any trouble at all," Butler said. "Then, a little after 12, a gentleman came up carrying what looked like an AR-15 and a sidearm. He started yelling racial slurs and throwing up the finger. It looked like he was trying to provoke people so he could start shooting."

Butler said several protesters began to move toward the man, but police intervened and removed the man further down the sidewalk toward the YMCA.

Another white male, dressed in camouflage and with what appeared to be a handgun holstered at his side, walked toward the crowd, witnesses said. A few minutes later, several of the protesters began walking toward him and yelling, causing him to walk back across Second Avenue from the courthouse as several law enforcement officers got between him and protesters. Officers took the man aside, and he left a couple of minutes later. Both Police Chief Fred Shelton and Sheriff Eddie Hawkins said he was not arrested.

Protesters Keisha Marchbanks, Ashley Hackman and Hackman's daughter, Khariya Blanchard, 13, told a Dispatch reporter that when the man approached the crowd in front of the courthouse he "tapped his guns" against a truck parked near the protesters.

District 5 Supervisor Leroy Brooks was addressing the crowd at the time of the incident.

"I was standing up next to the monument, praising the young people for being actively involved," he said. "The next thing I knew, a lady said, 'Mr. Brooks. There's a man with a gun over there.'

"I looked up and he was yelling and flipping the bird with both hands and some of the crowd was going towards him, but Chief Shelton and two other officers had the man and were kind of shielding him from the crowd," Brooks added. "It could have been a tragedy, but the police acted quickly and were able to de-escalate things."

By 12:15 p.m., all eight CPD officers on duty and numerous members of the Lowndes County Sheriff's Office had secured the scene and the protesters began to drift away. Only a few people were still at the scene by 1.

Shelton said there were no other arrests and no injuries.