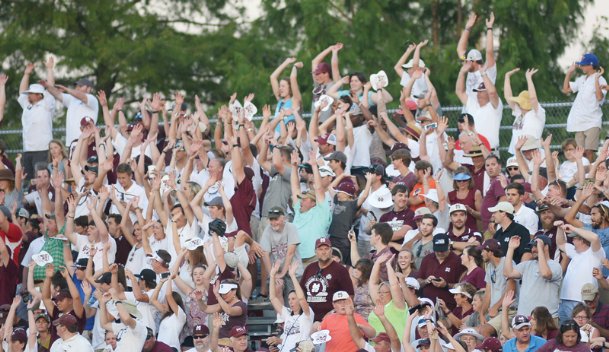 Fans cheer during a 2016 NCAA baseball Super Regional game Mississippi State University played against Arizona at Dudy Noble Field in this Dispatch file photo. The NCAA on Friday ruled Mississippi would be prohibited from hosting any postseason sporting events until the state flag was changed to remove the Confederate battle emblem. Photo by: Dispatch file photo 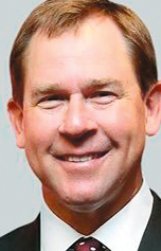 Collegiate athletics in the Magnolia State are feeling the effects of the Mississippi flag debate.

Friday, the NCAA announced that championship hosting opportunities earned on merit would no longer be allowed to be held in Mississippi until the state flag, which displays the Confederate battle emblem in its upper left corner, is changed.

Under previous stipulations set by the NCAA in 2001, Mississippi member institutions were allowed to host non-pre-selected championships, but not those whose host sites were predetermined, like the NCAA men's basketball tournament.

"There is no place in college athletics or the world for symbols or acts of discrimination and oppression," Chair of the NCAA Board of Governors and President of the Ohio State University Michael V. Drake said in a news release Friday. "We must continually evaluate ways to protect and enhance the championship experience for college athletes. Expanding the Confederate flag policy to all championships is an important step by the NCAA to further provide a quality experience for all participants and fans."

Among the more recent attempts to change the Mississippi state flag was a referendum in 2001 that asked voters to choose between the current banner -- originally adopted in 1894 -- and a newer design stripped of the Confederate battle flag. In response, 64 percent of voters chose to keep the 1894 flag.

The Legislature has been asked several times since to address the issue itself, but so far no flag-change bill has made it to a floor vote in either house.

"Again, it is unfortunate that our hard working student-athletes, staff and coaches could be potentially affected by something beyond their control, but we understand this is much bigger than athletics," MSU Athletic Director John Cohen said in an official statement Friday. "As previously stated, we will continue support for this long overdue change."

The Dispatch attempted to contact Mississippi State athletes, including incoming recruits, but was informed the university's athletic department would not make them available for interviews on the subject.

The MSU women's basketball team has also hosted a first- and second-round NCAA tournament regional every season between 2015 and 2019 and was slated to do so once more before the COVID-19 pandemic canceled this year's event.

"There is no place in our society for symbols of hatred, discrimination, and oppression," MSU women's basketball head coach Nikki McCray-Penson said in statement issued to The Dispatch. "As a Black woman coaching at one of the most diverse universities in the SEC, I look forward to seeing change that unites us and accurately represents our great community. I understand our student-athletes and fans may be affected by the NCAA's decision, but ultimately, this marks an important step toward inclusivity and an end to racial injustice."

The NCAA's decision to levy harsher restrictions on hosting events in Mississippi came less than 24 hours after Southeastern Conference Commissioner Greg Sankey put out a statement Thursday threatening the SEC would undertake similar measures, including not allowing the state to host any SEC championships, should the flag remain as is.

"The rulings by the SEC and NCAA affect our kids and community greatly, but we understand their intent," MSU baseball coach Chris Lemonis said in an official statement Friday. "My job as a head coach is to unite our players in a common goal and a change to our state flag is needed to unite Mississippi."

Speaking on SiriusXM SEC Radio Friday, Sankey backed up his comments, arguing that the conference had hoped change would arise in regard to the Confederate iconography on the Mississippi state flag but it hadn't.

"You'll note in my current statement, the observation is it's past time for change," he said Friday according to Saturday Down South. "We hoped change would come naturally. It is time for us to say, 'Well, we don't play our predetermined championships in the state, and now, if there isn't change, we'll remove those (that) rotate.'"

MSU women's basketball players Andra Espinoza-Hunter and Sidney Cooks previously chimed in on Sankey's comments Thursday night, tweeting in support of the motion, writing "You love to see it," and "period," respectively.

Beyond Starkville, Ole Miss Chancellor Glenn Boyce and Athletic Director Keith Carter issued a joint statement in support of removing the Confederate battle flag from the state's official banner, writing, "Mississippi needs a flag that represents the qualities about our state that unite us, not those that still divide us."

The presidents of Mississippi's eight public universities -- including MSU, Ole Miss and Mississippi University for Women in Columbus -- also released a joint statement Friday, writing: "In keeping the current state flag, Mississippi will potentially forgo the millions of dollars in economic impact that NCAA postseason events bring to our state. This is unfortunate. Our student-athletes and coaches, who devote so much of their time, talent, hard work and dedication to their sports and our universities, will potentially be negatively impacted through no action of their own."

On a more local level, the state flag debate and its effect on student-athletes is more divided.

While administrators, coaches and players have come out in favor of the change, there remain some in the Golden Triangle who are less willing to budge on the issue.

"I'm not racist, I'm not prejudiced," Starkville resident Bonnie Britt, who is white, told The Dispatch. "But the thing is, if (people) read their history ... they'd understand that it's the original Mississippi flag. Nobody on this God's green earth to this day -- I don't care if you're 90 years old -- you, your parents and your grandparents did not own slaves over hundreds and hundreds and hundreds of years. Let it go, man. Let it go."

Fellow Starkville residents Charles Spruell and Robert Guy, both black, were less matter of fact. They weren't wholly against changing the flag, but they argued against penalizing student-athletes in the process.

"That flag's been flying ever since I was in the war," Spruell -- a Vietnam veteran -- told The Dispatch. "And why they want to stop the games on account of the flag not being changed; that ain't got nothing to do with the game."

"If you're going to go ahead and change it, change it -- that's fine with me," Guy added. "(But) don't stop the kids from playing ball."

As for Starkville resident Deshawn Kelly, who is also black, she felt that in today's climate, it takes drastic measures to bring about change but that change should be welcomed.

"I think so," Kelly said of whether Mississippi should adopt a new state flag. "Hell, change it. Move on. Change is good sometimes. ... It's time to move on from this. Do something different."