Group works to get historically Black cemetery 'on the map' 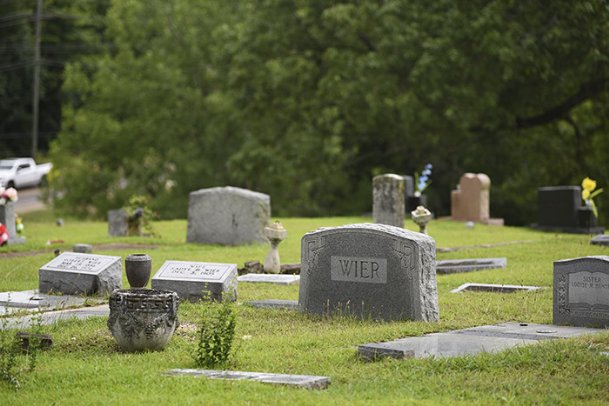 Wier family headstones, as shown on Monday at Odd Fellows Cemetery off of Highway 182 in Starkville. Robert and Sadye Wier both advocated to preserve the Odd Fellows Cemetery during their lifetimes. Robert organized citizens into a cemetery association that raised funds for preservation in 1955. Sadye helped get a Mississippi Highway Department historical marker placed on the property in 1979, according to a Historic Starkville sign posted at the entrance to the cemetery. Photo by: Claire Hassler/Dispatch Staff

The headstone of Rosa Stewart, as shown on Monday at Odd Fellows Cemetery off of Highway 182 in Starkville. Stewart was an English teacher and civil rights activist. Henderson Ward Stewart Elementary is partially named after her. A group of Starkville activists, including anthropology professors from Mississippi State, are planning a project to get a historic marker for nearby Brush Arbor Cemetery, in hopes of highlighting Brush Arbor, Odd Fellows and other historic African-American cemeteries in the area.
Photo by: Claire Hassler/Dispatch Staff

Shane Miller and Molly Zuckerman perked up when an organizer of Starkville's racial justice protest mentioned a local cemetery during the rally at the Mississippi State University Amphitheatre on June 6.

"There is a whole slave cemetery in Starkville that does not have a point on Apple Maps or on Google Maps," MSU student Jala Douglas told the audience of thousands. "You can't find this anywhere unless you're walking past it. We're going to change that."

The cemetery in question is Brush Arbor, formerly known as Starkville Colored Cemetery, next to the well-known Odd Fellows Cemetery south of University Drive and east of Fellowship Street. Odd Fellows is one of the oldest African-American cemeteries in Mississippi and has been on the National Register of Historic Places since 1990. It is one of 10 cemeteries nationwide associated with the Odd Fellows international fraternity.

Miller and Zuckerman are anthropology professors at MSU, and both said they saw an opportunity in Douglas' comment. Miller has since been in contact with Starkville Stand Up, the activist group for racial justice that formed in late May and organized the protest.

While Starkville Stand Up and its associates will work to get Brush Arbor recognized on mapping apps and with a historical marker, MSU anthropology students and faculty will be doing their own work to study and highlight African-American cemeteries.

"I'd like to think our role would be just getting interest from students and having them see this as an opportunity to take the bigger issues that they see around the world, in the United States and on the news, and actually affect some change locally," Miller said.

Zuckerman said she hopes MSU and the Starkville community work as a team "to learn more about the history of this place and to revive it and preserve it."

She is a bioarchaeologist, or someone who studies skeletal remains through an archaeological lens, and she said she has spent the past eight years researching the site of the state mental health asylum in Jackson that once occupied where the University of Mississippi Medical Center is now. Thousands of deceased asylum inmates were buried in now-unmarked graves there, and at least 50 percent of them were African Americans, Zuckerman said.

Meanwhile, incoming MSU anthropology graduate student Cassidy Rayburn will be researching African-American cemeteries for her master's thesis, and she said she is excited to get started.

"I want to use my time as a graduate student to help advocate for communities and their heritage as much as possible," Rayburn said.

A rich but fading history

DeeDee Baldwin, a history research librarian at MSU, has been researching cemeteries in Oktibbeha County for years as a hobby, including taking pictures of graves for the Find-A-Grave website.

"I've never seen a Find-A-Grave cemetery that doesn't show up on Google Maps, so that's really strange," she said.

Many of the graves in African-American cemeteries are unmarked, and documentation of the cemeteries' existence is rare, so they live on primarily in the memories of descendants and other locals, Baldwin and Zuckerman both said.

"All over the country, there are thousands of African-American burial grounds that are threatened, that are being damaged by development (or) disuse and neglect, without communities that know of them and are taking care of them," Zuckerman said.

Federal legislation passed in 1990 protects Native American burial grounds from excavation or occupation by any group that is not the tribe buried on that land. There are no such protections for African-American gravesites, and uniform guidelines are necessary to properly preserve this history, Zuckerman said.

"Any remains recovered from them could be associated with their descendant communities, so we can move forward in a coherent way of protecting these places rather than having to do it in patchwork," she said.

Any cemetery in Mississippi where African Americans were being buried in the first half of the 19th century was primarily a slave cemetery, said Chuck Yarborough, who teaches African-American history at the Mississippi School for Mathematics and Science in Columbus.

Even graves that were originally marked tend to become "overwhelmed by time, which is kind of the reality of the story of the black community," he said.

A more immediate project is cleaning up debris in Odd Fellows and Brush Arbor, which Zuckerman said MSU students have been doing.

Rayburn said she hopes her graduate research can "bring together academic and cultural communities on many different levels" for Starkville's benefit.

"Personally, I believe that we can understand ourselves and our relationships with others if we have a better comprehension of our history," Rayburn said.