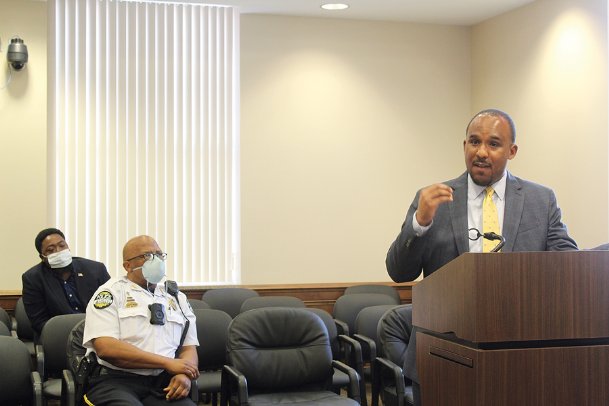 Speaking to a crowd gathering outside Lowndes County Courthouse in July 2016, newly elected District Attorney Scott Colom announced he would make a standard practice of deferring cases that involved the potential for prosecuting law enforcement over to the Attorney General's Office, starting with the high-profile fatal shooting of Ricky Ball by Columbus police officer Canyon Boykin.

Four years later, after standing outside the same courthouse to express dissatisfaction with how the Ball case ended, Colom concluded he would never do that again.

State prosecutors, working under then-AG Jim Hood, landed a manslaughter indictment for Boykin, who shot Ball after a traffic stop on Northside in October 2015. The prosecutors also fought off over four years several motions from Boykin's attorneys to dismiss the case.

But just four months into new AG Lynn Fitch's tenure, her office abruptly dismissed the case with prejudice, pushing Colom to decide he would prosecute such cases himself moving forward.

"If I were to refer a case to the AG like this again, then there would be distrust in the outcome because of the way this case was handled," Colom told The Dispatch. "In that regard, I feel like it's better that people feel like they are accountable to me and I'm accountable to them."

In a June 4 prosecution report, Fitch's office concluded all evidence supported Boykin's claim he shot Ball in self-defense, despite contradictory evidence in the case file that may suggest otherwise.

Colom publicly released much of the case file. The AG's Office never gave a reason why the case was dismissed despite the other evidence, including statements from witnesses describing Boykin's previous run-ins with Ball and conflicting medical examiners' reports.

Fitch's dismissal also came days after the police killing of George Floyd in Minneapolis and the national unrest that followed, a combination that sparked demonstrations throughout the Golden Triangle, especially in Columbus.

Transferring officer-involved cases to the attorney general, Colom said, used to be his way to avoid the appearance of conflict of interest. The Mississippi Bureau of Investigation (MBI) usually conducts an independent investigation into each officer-involved incident, he said. Following the investigation, he would request an AG review and hand over the case file.

It is hard to remain impartial while processing officer-involved shooting cases through his own office, Colom acknowledged, because he and his staff work closely with law enforcement agencies throughout his four-county district.

"I have five prosecutors. All of them have to work closely with the police and investigators," he said. "So there's no way that I can have someone that's totally independent to review the cases."

However, he said, he fears leaving the cases to the AG would lead to public distrust.

"People need to have trust in the criminal justice system. If the officer is justified for the shooting, I'll uphold his or her rights," Colom said.

Moreover, he said the office can remain transparent to dial down the potential backlash.

"In a situation where the officer is not charged, what we need to do is follow the model that we did after Ricky Ball, which is provide all the information to the public," Colom said. "We've got to have people trusting the system."

It is up to district attorneys to determine if they should recuse from certain cases, said Cherie Wade, president of the Mississippi Prosecutors Association.

Additionally, no law or rules of ethics requires them to recuse themselves from an officer-involved case unless, for example, the district attorney is kin to the defendant, said Lowndes County Circuit Court Judge James Kitchens.

"The fact that a police officer (is involved) in any type of crime," Kitchens said, "does not automatically require recusal."

Kitchens, who has been a judge at the 16th District Circuit Court for 18 years, said it is not uncommon for local district attorneys' offices to prosecute such cases. He has witnessed five officer-involved shooting cases during his tenure, he said, and four out of the five have been processed by the local district attorney.

Other district attorneys across the state told The Dispatch they prosecute cases of officer-involved shootings themselves. Steven Kilgore of The Eighth Judicial District -- representing Leake, Neshoba, Newton and Scott counties -- said his office never transferred any case of officer-involved incidents to the AG and would only consider doing so after an officer is indicted by a grand jury. In the 14 years of his tenure, he said no officer was ever indicted in his district.

Kilgore acknowledged the appearance of conflict of interest with his office handling such cases, but he said it is his office's duty to prosecute any criminal cases brought to its attention, even officer-involved ones.

"Once a person is indicted, they are entitled to a fair trial, all the way through," he said. "If it appears that it couldn't be fair (if) handled through our office, then that's when we would consider (transferring the case)."

The MBI investigations, Kilgore said, should assure the impartiality of the evidence presented to the grand jury if necessary.

Daniella Shorter, newly-elected district attorney of District 22 -- representing Claiborne, Copiah and Jefferson counties -- shared Kilgore's view. The prosecutors should look at the evidence instead of the relationship between the office and law enforcement, she told The Dispatch.

"As prosecutors we are supposed to be unbiased in our review of the evidence, of the law, of the facts," Shorter said. "Maybe something will be awkward, maybe not, but you have to seek justice."

When asked about Colom's approach to make certain evidence public, Kilgore said he would be reluctant to follow suit.

"I understand the need for transparency but there's also other concerns about privacy," Kilgore said. "I'd be hesitant to release evidence, but I wouldn't 100 percent exclude it."