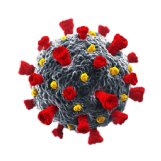 A West Point business that oversees gymnasiums has filed a class action lawsuit in federal court against its insurance company, alleging the company is refusing to pay for losses incurred by several of the gyms earlier this year when they temporarily shut down due to the COVID-19 coronavirus pandemic.

Fountain Enterprises, a franchisee of Anytime Fitness, owns and operates several Anytime Fitness gyms in Alabama and Mississippi. Four of those gyms -- including a location in West Point and another in Fulton -- were named in the lawsuit which Fountain filed against Illinois-based Markel Insurance Company in federal court in Illinois Wednesday.

The complaint says Fountain Enterprises provided Markel with notices of its losses and expenses due to the pandemic and economic shutdown on April 18, and that on April 23, Markel responded it would not cover the expenses.

"Businesses pay premiums, obviously money they could put back into their own businesses, to protect them from exactly this type of situation," Zimmermann said. "Fountain, like thousands of businesses nationally, paid these premiums. They secured an all-risks policy to make sure they had enough to keep their businesses alive and pay their employees and handle other matters when an emergency happens. Obviously we're in quite a stage of emergency. ... Markel's turning their backs on their contractual obligations to our clients and businesses like our clients. They've been devastated. We just want them to honor the terms of the contracts and honor the promises they've made to the client."

The Anytime Fitness location in West Point suspended business operations on April 3 in accordance with restrictions from the city, Clay County and Gov. Tate Reeves' executive order closing businesses deemed nonessential, the complaint said. The location also froze billing to customers from May 2-May14, and was unable to recruit new gym members or sell in-store items, all of which resulted in lost revenue. The two Alabama locations also temporarily closed their doors.

The locations in both West Point and Fulton reopened on May 11 under "severe limitations on the ... use of the property," including limiting the number of customers in the facility at the time, spreading equipment at least six feet apart and requiring extra deep-cleaning and sanitation measures, all of which cost the gyms extra expenses.

Zimmermann said Fountain is requesting a trial for a jury to determine losses to be paid to Fountain Enterprises.

"This is a national issue," she said. "We're talking about thousands and thousands of businesses who have been left out in the cold during a pandemic and it's really shameful, because that's what they paid for."

Markel representatives did not respond to an email from The Dispatch by press time.