Nearly-complete Partnership School to be ready for students in August 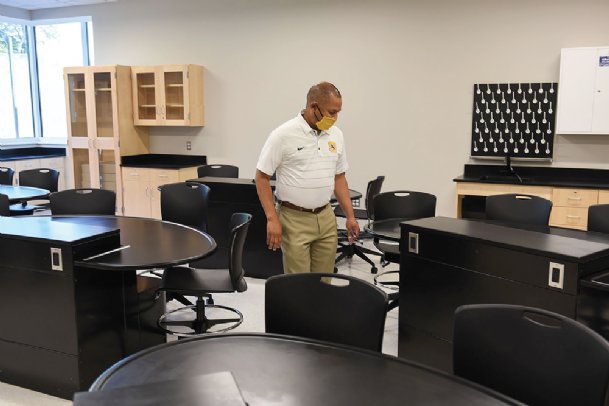 Starkville-Oktibbeha Consolidated School District Superintendent Eddie Peasant walks through a science lab during a tour of The Partnership School on Wednesday in Starkville. Peasant said teachers will be able to adjust the height of the tables depending on the lab activity. Photo by: Claire Hassler/Dispatch Staff

The Partnership School, as shown on Wednesday in Starkville. Construction of the school was delayed due to the COVID-19 pandemic but should be complete in August.
Photo by: Claire Hassler/Dispatch Staff 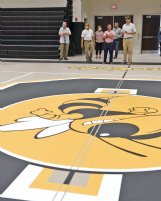 From left, John Brown, Superintendent Eddie Peasant, Principal Julie Kennedy, Wes Gordon, John Maulding and Sumner Davis look at the gymnasium during a tour of The Partnership School on Wednesday in Starkville. The SOCSD board took a tour of the nearly completed building on Wednesday morning.
Photo by: Claire Hassler/Dispatch Staff

From right, Superintendent Eddie Peasant and school board member Wes Gordon walk through the halls during a tour of The Partnership School on Wednesday in Starkville. Classrooms in the school are broken up into pods, and there are four 6th grade pods and four 7th grade pods.
Photo by: Claire Hassler/Dispatch Staff 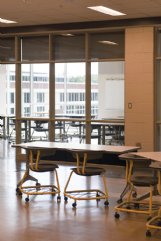 Observation tables sit outside a classroom during a tour of The Partnership School on Wednesday in Starkville. MSU students will sit at these tables to observe classrooms when school is in session.
Photo by: Claire Hassler/Dispatch Staff

From left, Sumner Davis and Wes Gordon, both members of the school board, look outside during a tour of The Partnership School on Wednesday in Starkville. Superintendent Eddie Peasant said the pile of dirt outside will be moved onto a playing field before construction is done.
Photo by: Claire Hassler/Dispatch Staff

Now that the Partnership School is almost finished and ready to open, it's "a huge relief" for Eddie Peasant, the Starkville-Oktibbeha Consolidated School District superintendent.

The new building on the Mississippi State University campus still has some work left to be done, from assembling the library shelves to laying the grass turf on the field outside, but construction meetings are a thing of the past. The school will be ready to teach SOCSD sixth and seventh graders in August, even though the district's plans to reopen buildings are fluid as the COVID-19 pandemic continues, Peasant said.

"It's one less thing that we'll have to deal with, as far as construction meetings and construction of the building," Peasant said.

The building includes a grand staircase, a designed special education room, some floor-to-ceiling windows in both classrooms and hallways, SmartBoards in every classroom and outdoor space for both class instruction and other activities.

The school will also serve as a training lab for MSU's College of Education, allowing MSU students to observe classroom teaching and making university faculty a resource for SOCSD teachers and administrators. The middle school classrooms have desks outside where MSU students will sit and observe, and teachers can block the younger students' view of their observers if need be.

"You can pull the screen up or down, and when the screen is down, you can still see in there (from outside)," Kennedy said.

The 123,000 square-foot building was originally scheduled to open in August 2018 before rain delays pushed it to November 2018, January 2019, August 2019 and finally August 2020. The project was funded by a local $16 million bond, a $10 million allocation from the Mississippi Legislature and cash and land donations by MSU.

Construction first ran into trouble in August 2017 when weather concerns, primarily Hurricane Harvey, drove up the cost of construction materials, causing an overall increase of about $2 million. The original projected cost was $27.5 million. When the SOCSD board accepted a bid from Columbus-based West Brothers Construction in December 2017, the full price became $29,908,401.

AMS currently houses grades 6-8. The Partnership School will make AMS the building for grades 8-9 and Starkville High School for grades 10-12.

In addition to required core subjects like math and English, the Partnership School will offer "exploratory" elective courses including robotics, music, art, theatre and the introduction to world languages.

Most of these courses are already offered at AMS, Kennedy said, except for the world languages classes and the agriculture classes made possible by a $900,000 grant from Blue Cross Blue Shield, the largest the organization has ever awarded to a public school district.

The grant, awarded in February, funded the Partnership School's gardens and mobile kitchens. Sixth graders will have a classroom designated for Gardening and Overall Wellness (GrOW), where they will learn about nutrition, cooking, gardening and other healthy lifestyle choices. Seventh graders will have their own classroom "garden pod," an outdoor garden space that will be incorporated into their coursework across a variety of subjects.

"We're just excited to be able to offer them a hands-on learning experience," Kennedy said.

The elective courses will be offered for nine weeks at a time for sixth graders so they can explore their interests before they take yearlong electives in seventh grade, she said.

The Partnership School is walking distance from multiple learning opportunities on the MSU campus, such as the Thad Cochran Research, Technology and Economic Development Park, so students will be able to take field trips without having to use the school buses, Peasant told The Dispatch.

He also said the educational component for MSU students will be one of a kind.

"(They will be) getting a different experience than they would in any other teacher prep program in that they're working and learning here in a school with real students every day," Peasant said.

Brown said he "would have loved to have been able to observe a classroom and see how things should run" when he was working on his bachelor's degree in education from MSU. He is the board's longest-serving member and the only one who has seen the Partnership School grow from an idea to a tangible reality.

"I would have liked for (construction) to be further along, but eventually we'll get there," Brown said.