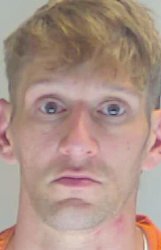 A man already listed on the Mississippi Sex Offender Registry has been charged with kidnapping two children and taking them to Meridian, investigators with Lowndes County Sheriff's Office say.

Edward Kidd, 35, of Lee Stokes Road, was arrested at his home on Monday, according to an LCSO press release. The release said investigators determined Kidd took two underage children to Meridian without permission on April 28. The children's father reported the incident to deputies on Sunday.

Lt. Darrell Nabors, who is head of LCSO's criminal investigations, said the victims were both under 16 at the time of the alleged incident. They are now back with their parents, LCSO Chief Deputy Brent Swan confirmed to The Dispatch Thursday.

Kidd was convicted of statutory rape in 2016, according to the Mississippi Sex Offender Registry website. He was sentenced to 10 years in Mississippi Department of Corrections, with 10 years suspended and five years probation, circuit court records show.

He has been released from Lowndes County Adult Detention Center on $10,000 bond.