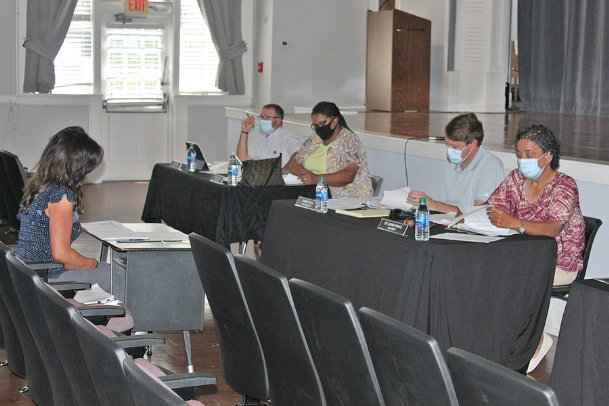 The Starkville-Oktibbeha Consolidated School District might get significantly more funding from the state than administrators previously thought, they said at a special-call meeting and budget work session Monday.

The education appropriations bill approved in conference Monday morning in the state House of Representatives would cut last year's Mississippi Adequate Education Program funding amounts by 1.6 percent statewide if it passes the Senate, which SOCSD board vice president Sumner Davis said will most likely happen.

The total MAEP funding allocation for SOCSD will be determined partly by average daily attendance, which dropped by 61.37 students last school year, Chief Financial Officer Tammie McGarr said at the board's regular meeting earlier this month. However, she said the district should receive more funds than she projected in the draft budget the board discussed Monday, based on an appropriation 5.9 percent lower than last year's, or a loss of $1,345,000.

McGarr had been prepared for the "worst-case scenario" of receiving 20 percent less funding than last year and said she drafted a budget earlier this month based on that estimate but did not present it to the board Monday.

McGarr noted a few purchases that the district might not need, such as some new buses and heating and air conditioning units, in order to save money. She also said she hopes the Coronavirus Aid, Relief, and Economic Security Act (CARES Act), the federal COVID-19 relief package, would cover the cost of replacing some electronics.

The district was "able to move things around" and eliminate two sixth-grade teaching positions, which saves about $125,000, but the administration tries to avoid job cuts whenever possible, McGarr said.

"The majority of our budget is personnel, so we were trying to look at every area we could look at so we would not have to look at cutting people," she said.

Several budget increases will come from the addition of the Partnership School, the new campus for grades 6-7 located at Mississippi State University, including roughly $257,000 for utilities and roughly $50,000 in property and liability insurance.

The budget also allows for increased purchases of textbooks and other instructional materials, even though SOCSD has yet to decide if classes will be held in person and to what extent due to the pandemic, McGarr said.

"(It's) still up in the air what school is going to look like and what we're going to need, so we wanted to make sure we included funds to cover anything we could possibly need," she said.

McGarr said at the previous meeting that the district also plans to spend an additional $728,000 on teacher pay increases, planned on the district's pay scale, and expects a $200,000 insurance increase during the 2020-21 school year.

However, she predicted a decrease in overtime pay and said leftover funds from last school year will add to the fund balance for the next one. Last year's fund balance totaled about $12.2 million.

The Legislature's debate over the state flag, which culminated in a bipartisan vote over the weekend to remove the Confederate battle emblem, delayed other decisions, including final education funding amounts, SOCSD spokeswoman Nicole Thomas said.

Peasant said the district will subsequently remove the current flag from its buildings.