'We're going to smoke him out': Protesters undaunted by Sanders' refusal to resign Tuesday 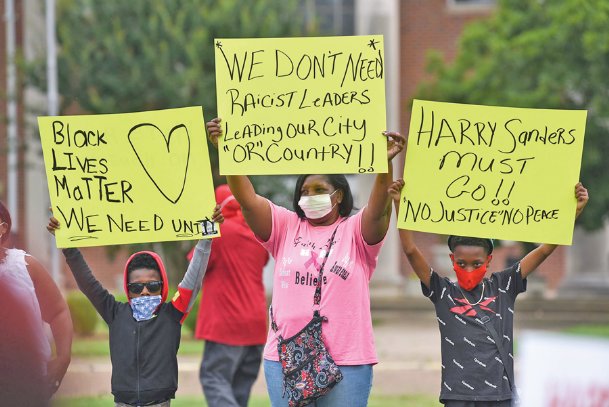 From left, Malachi Turner, 8, Mary Shinn and Demarius Shinn, 10, hold signs during a protest demanding District 1 Supervisor Harry Sanders' resignation on Tuesday outside the Lowndes County Courthouse. The crowd began at the front of the courthouse and then walked to the back entrance that the county supervisors use. Photo by: Claire Hassler/Dispatch Staff

Sweat pours down District 5 Supervisor Leroy Brooks' face during a protest demanding District 1 Supervisor Harry Sanders' resignation on Tuesday outside the Lowndes County Courthouse. "We will live as one community or we will perish as two, but we're not scared," Brooks said in his speech to the crowd after the meeting.
Photo by: Claire Hassler/Dispatch Staff

People hold signs and watch the back entrance of the courthouse during a protest demanding District 1 Supervisor Harry Sanders' resignation on Tuesday outside the Lowndes County Courthouse. The demands were in response to Sanders telling The Dispatch after the June 15 supervisors meeting that African Americans have been "dependent" since slavery.
Photo by: Claire Hassler/Dispatch Staff

A crowd chants during a protest demanding District 1 Supervisor Harry Sanders' resignation on Tuesday outside the Lowndes County Courthouse. District 5 Supervisor Leroy Brooks informed the crowd after the meeting that Sanders stepped down as president of the board but did not resign. The crowd responded that that was not enough.
Photo by: Claire Hassler/Dispatch Staff 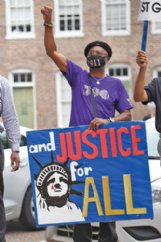 Ezra Baker holds a sight that reads "and justice for all" during a protest demanding District 1 Supervisor Harry Sanders' resignation on Tuesday outside the Lowndes County Courthouse. Baker was one of three African American teachers at Stephen D. Lee High School who sued the Columbus Municipal School Board in 1972 for suspending them for dress code violations. 200 students protested the teachers' termination and the teachers won the case. Baker said the march for the teachers was the last time he saw so many people protesting in Columbus, until the 300-person Jesus and Justice rally, which took place on June 7.
Photo by: Claire Hassler/Dispatch Staff

Protesters assemble on the back lawn of the Lowndes County Courthouse during a protest demanding District 1 Supervisor Harry Sanders' resignation. Sheriff cars lined up bumper to bumper in the parking lot of the courthouse.
Photo by: Claire Hassler/Dispatch Staff

Fifteen minutes before the start of Tuesday's Lowndes County Board of Supervisors meeting, Johnny Hampton stood in the entrance of the courthouse, using a bullhorn to lead a crowd of about 70 protesters in chants of "Harry Must Go."

More than an hour later, long after word had filtered out that Sanders, whose racist comments have sparked continuous protests and calls for his resignation, did not resign from the board, the chants continued with no apparent lack of enthusiasm.

"We knew he wasn't going to resign," Hampton said. "He's not going to back down, so we have to be in this for the long haul."

Although not surprised by Sanders' refusal to resign from the board of supervisors, those who gathered at the courthouse did not feel as though their efforts were in vain.

"This is just our first step," said Ernestine Taylor, 64, a Columbus business owner. "We're not going anywhere. We're going to smoke him out. He's going to come out sooner or later."

Sanders' comments that sparked public outrage and Tuesday's protest came June 15 after he voted to keep the Confederate monument placed on the courthouse lawn. In an interview with a Dispatch reporter, he said Black people had been "dependent" since slavery and hadn't "assimilated" to American society as well as other groups.

Ezra Baker, at age 75 one of the older protesters, had a unique perspective and purpose for joining the demonstration.

"I was a civics teacher in Columbus for 24 years and I taught justice and equality to all of my kids," Baker said.

While most of the protesters carried mass-produced "Harry Must Go" signs, Baker carried a sign made by one of his former white students, which featured an image of the Statue of Liberty with the words "Equality and Justice for All."

"These kids, when you teach them, they learn and they will implement what you teach them," Baker said. "I see all these young people, some of them my students. That young man, David Horton, who organized the first protest over Ricky Ball, was one of my students. It was the first movement we've had in Columbus for going on 50 years."

Baker had a prominent part in that protest, too, which came after Mississippi Attorney General Lynn Fitch dropped the manslaughter charge in May against a white former police officer who fatally shot Ball, who was Black, following a traffic stop in 2015.

Baker and the two other teachers were fired for refusing to cut their afro haircuts, but sued the school district and got their jobs back.

"Harry didn't resign today, but this did have an impact," Baker said. "If a man has any conscience at all, this has to have had an impact."

Hal Moore, a Realtor and Air Force veteran, said Sanders' comments will do irreparable harm to the community until he steps down.

"This is not 'Resign for the Blacks,' It's 'Resign for the whole Golden Triangle,'" Moore said. "We don't want the nation to look at us and see this. That's not what we're about. I didn't serve this country for over 20 years to see that."

Hampton said he understands the decision to resign is ultimately Sanders' alone, but he said protesters will continue to ramp up the pressure, perhaps shifting the protests to Caledonia, the heart of District 1, which Sanders represents.

"The people that keep putting him in office want him there," Hampton said. "What does that say about those people? If it takes going down to Caledonia, we're going to do that. We're at the courthouse because that's where Harry does county business, but we'll take that pressure to wherever it needs to go."

Although disappointed that Sanders still refuses to resign, Taylor said the protesters are not discouraged or even frustrated.

"We won't allow ourselves to get sidetracked," she said. "Everybody I've talked to in the Black community is smooth about it, very peaceful about it. This is what we are going to send out to the whole world: That we are a peaceful group of people who do not cause problems. The agitators might come in, but we're going to resist all that agitation. We're going to be peaceful.

"But we're not giving up," she added.