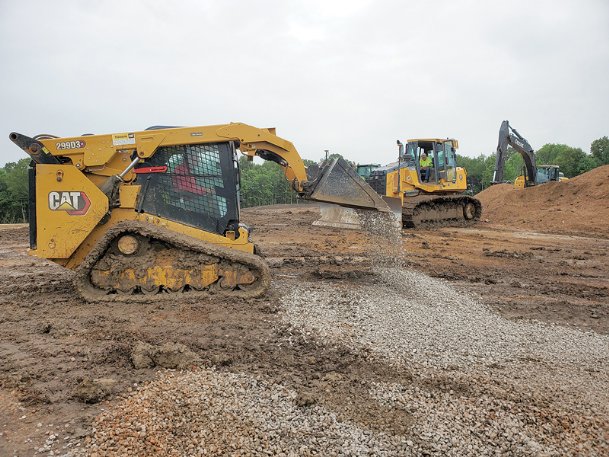 Winters Construction crews work Friday on a nine-acre lot on Reed Road in Starkville that is set to become an affordable housing complex with 36 single-family homes. The work began in April and is expected to be complete in the fall of 2021. Photo by: Tess Vrbin/Dispatch Staff

A rendering of a single-family home in a 36-building complex at the intersection of Reed Road and Westside Drive in Starkville. Developer Stewart Rutledge said he hopes the city's workforce, including veterans and single parents, rent the houses that they will be allowed to own after 15 years, with monthly rent contributing to an eventual down payment.
Photo by: Courtesy image/Stewart Rutledge

Thirty-six houses are coming to the corner of Reed Road and Westside Drive in Starkville, with the goal of housing the city's low-to-middle-income residents, Oxford-based developer Stewart Rutledge said.

Clark Grove is a $17 million development of rent-to-own homes, meaning part of the monthly rent of about $750 will go toward a down payment so the residents can buy the houses after 15 years, Rutledge said. At the same time, a credit counselor from the Mississippi Home Corporation works with the residents toward securing a loan to buy the homes for a reduced price.

"You have to have income in order to pay the rent, but the rent is affordable enough that we're able to serve all types (of people)," Rutledge said.

The development's target residents are "the general population" but with a focus on veterans, firefighters, single parents and other members of the "workforce," Rutledge said -- a portion of Starkville's population which Mayor Lynn Spruill said "is a market we need to accommodate."

Each house will be about 1,600 square feet with three bedrooms, two bathrooms and a two-car garage. The development narrative document said each house "will have its own unique front elevations to allow the neighborhood to appear as containing multiple, distinctive homes instead of a cookie-cutter apartment complex."

The houses will also include energy-efficient appliances and wireless internet connectivity, according to the document.

Rutledge has developed several rent-to-own housing complexes throughout the South, including about 10 in Mississippi. Oxford, Corinth, Holly Springs and Lowndes County have all been the sites of new developments from Rutledge in the past several years.

Fountain Square, on Yorkville Road just south of Columbus, is a $7 million project with 48 townhomes in 12 buildings. It was finished in 2017.

Although Clark Grove is aimed at the city's workforce, it is not government-subsidized housing under Section 8 of the Internal Revenue Tax Code, Rutledge said. Many of his housing projects fall under Section 42, which provides tax credits to investors who build affordable housing in return for a reduction of their tax liability. Section 8 instead provides direct assistance for private landlords to build affordable housing complexes.

Rutledge said he appreciates that Spruill and other local leaders see Clark Grove as an opportunity to better the city.

"Communities shouldn't take it for granted that their leaders are working to produce growth, new jobs and new developments," he said.

Construction on the housing complex began in April and should be finished in the fall of 2021.