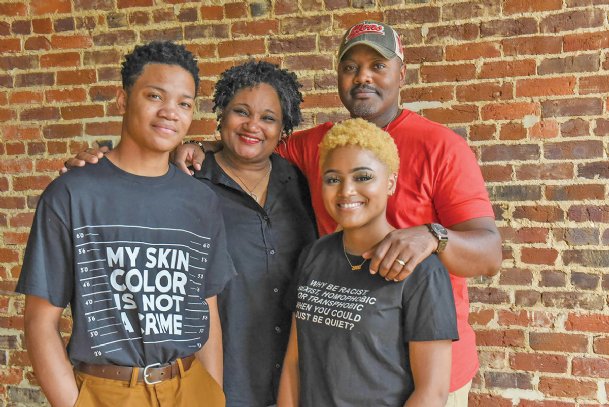 From left, Kyle Alexander, 14, Angela, Morgan Marie, 20, and Terrell Jones pose for a portrait on June 26 in Columbus. Morgan will be a senior at Mississippi University for Women and Kyle will be in ninth grade at Columbus High School. Each member of the Jones family has different preferences for their racial identities. Morgan said she uses African American for formal uses, such as in the newspaper, but uses Black in casual settings. Angela identifies as Black all the time. Terrell said he prefers African American but isn't opposed to being referred to as Black. Kyle identifies as African American all the time. Photo by: Claire Hassler/Dispatch Staff 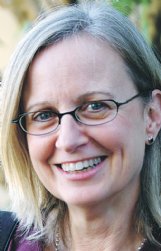 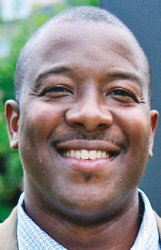 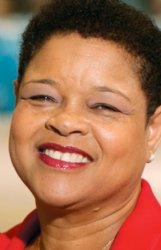 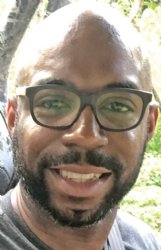 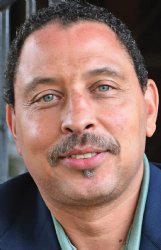 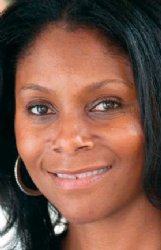 Shannon Bardwell has a question for her friend, Angela Jones, a question that had been nagging at her over the weeks since the death of George Floyd, an event that stirred a reawakening in the Black Lives Matter movement, both nationally and here in the Golden Triangle.

"As I read her posts on Facebook, I could see her heart had been broken over the racial injustice and the heartache it has created," said Bardwell, a columnist for The Dispatch who is white. "I wanted to be sensitive to that so I asked her the question: Do you prefer to be called Black or African American?"

For Jones, 48, it was an intriguing question.

"I identify as Black, but I really hadn't given it much thought," Jones said. "So I asked my husband. He said Black, too, but my son and daughter prefer African American."

Jones decided to post the question on her Facebook page. The discussion was lively, with 116 comments, but no clear preference seemed to emerge.

"To me, it's interchangeable," said Germain McConnell, executive director of Mississippi School for Mathematics and Science in Columbus.

"I refer to myself as Black most of the time," said Brenda Lathan, who recently retired from her senior vice president position at the Golden Triangle Development LINK. "I'll answer to either, though. I don't really have a preference."

For some, self-identification is more complex.

"It's a question that calls for a not so simple answer," said Omar Jones, who works at PACCAR.

"White people, we never had to wonder what we were when we filled out a form. We just checked the 'white' box and went on about our business," she said. "The discussion really opened my eyes to something I hadn't really thought much about."

The evolution of self-identification

How the Black community has self-identified went through an evolution during the 20th century. Until the 1900s, the most common reference was "colored," but gave way to "Negro," a movement largely credited to W.E.B. DuBois.

Although it is considered an unacceptable term today, "Negro" was the commonly accepted term in the Black community for a time. Martin Luther King Jr. used the term throughout his campaign for Civil Rights.

New voices in the Civil Rights movement -- particularly Malcolm X and Stokely Carmichael -- advocated for the word "Black" at a time when Black Americans began becoming more assertive in the demands for equality.

By the end of the 60s, "Black" had become the preferred description. In the 1980s, Black leaders, such as Jesse Jackson, began to advocate for the use of the term "African American," which many believe acknowledges the historical and cultural roots of the people.

That both "Black" and "African American" are widely used and accepted says something about the difficulty Blacks have faced in America, Omar Jones said.

"The fact that this question has to be posed speaks to the racism that we have faced in this country," he said. "It's 2020 and we're still grappling with the issue of identity. That's due in large to the fact that we have no connections to our countries of origin because we were stripped of it due to the terrorism of the transatlantic slave trade."

Not a perfect fit

"You're going to get some people who don't want to be called Black because they'll say, 'I'm not black. I'm brown.'" he said. "I know I was against being called Black in the past. But then I started thinking, 'Why am I being called African American? I'm not African.'"

Benny Hairston Jr., owner of Century Hairston Funeral Homes in Starkville and Columbus, said he believes there is a subliminal negative message in the term "Black."

"If I had to choose between the two I would choose African American," Hairston said. "Why not Black? Well, you have black ball, black sheep, black widow. Everything with black in front of it is negative, and I don't care for that."

Omar Jones also noted the terms can have a different connotation.

"I get the feeling that African American comes off a little less threatening than Black," he said. "Black is typically linked with radicalism in society: The Black Panthers, Black Muslims, Black Lives Matter. So, identifying with Blackness makes many people uncomfortable and unnecessarily fearful."

"For some people, they have a pretty hard and fast idea of what they prefer," Lathan said. "For me, it's pretty interchangeable, but I respect that not everyone feels that way."

While there is no discernible preferred term, one thing that most agree with is that there is an identity they all share.

"What I do know is that I am an American," said Anika Perkins, executive director for university relations at Mississippi University for Women. "I identify as Black, but I'm not offended when I'm called African American. But, in most cases, American is how I identify."

"At the end of the day, we're all Americans," Lathan agreed.

"If it was up to me I would want to be called an American," Hairston said. "All of us live here in America, we are all the same, just different shades."