Black organizers plan to address divisions within their community 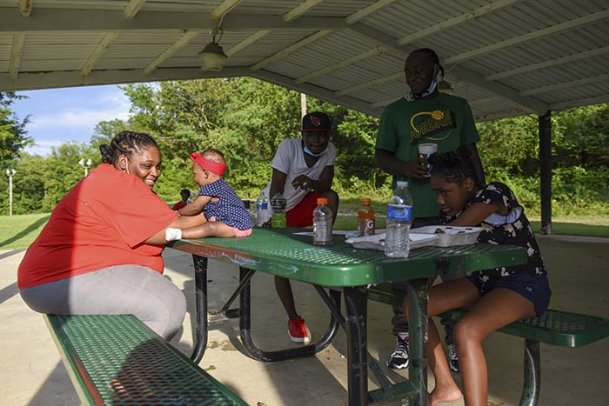 Shaimeka Hemphill, Eriel Monroe, 6 months, Marc Evans, Samuel Hill and Willow Gillespie, 9, sit at a picnic table during the Liberate with Love event on Friday at Moncrief Park in Starkville. The event, organized by the Mississippi chapters of the Black Panthers and the Huey P. Newton Gun Club, encouraged Black citizens to put aside their differences and come together for racial justice. Photo by: Claire Hassler/Dispatch Staff

Despite the turnout of a few thousand people at Starkville's racial justice protest on June 6, Eric Chandler said many Black residents of the city did not attend the protest and did not feel their goals and interests were represented.

Chandler, who said he does not belong to any community groups, organized an event called "Liberate with Love" that drew more than 30 Black locals to Moncrief Park on Friday to discuss the pursuit of racial justice. The event included two speakers from the Mississippi chapters of Black-run nationwide groups that take a militant approach to fighting anti-Black racism, including the Black Panthers and the Huey P. Newton Gun Club.

The Black Panthers formed in Oakland, California in 1966 and are no longer a political party but still advocate for racial justice. The Huey P. Newton Gun Club formed in Dallas, Texas in 2014 and was named after a Black Panthers co-founder. Both organizations believe in monitoring the police to prevent violence against Black Americans.

Chandler and the two speakers at the event -- Commander Vashaun Ferguson of the Black Panthers and Commander Marcus Hunt of the Newton Gun Club -- all said the top priority for Black people should be repairing divisions between them.

Ferguson and Hunt both added their organizations believe Black people should openly carry firearms and know how to use them so they do not shoot each other. Open carry is legal for those 18 and older in Mississippi.

Friday's event included sign-up sheets for people to register to vote or join the Black Panthers or the Newton Gun Club. It also offered attendees an opportunity to eat dinner from a local food truck and socialize with their neighbors.

"(We're) just trying to get Black people to come together so we can actually have a conversation about the Black community and what needs to be done to better our situation -- for our children, for our elders, for anybody," Chandler told The Dispatch.

He said he hopes the event will become the first of many and encouraged attendees to spread the word. He and other organizers are working on forming a committee to coordinate their efforts.

The state Legislature's decision last month to remove the Confederate battle emblem from the state flag was progress but not enough, Chandler said.

"We're going to have to keep our knee on the neck of the establishment the same way they kept their knee on the neck of George Floyd and choked him out," Chandler said, referring to a Black man killed by a white policeman in Minneapolis in May, an event that sparked protests nationwide, including the one in Starkville.

'Love for your own people'

Oktibbeha County NAACP president Yulanda Haddix supplied protective face masks for the event to prevent the spread of the COVID-19 coronavirus. She and Rev. Joseph Stone, pastor of Second Baptist Church, both said they wanted to attend the event but were not available. They said they support the organizers' message of healing divisions within the Black community, even if they do not employ the same methods.

Haddix said the NAACP believes Black people should "control the crime in our community firsthand and only utilize the police when we need them." She and Ferguson both said a relationship of mutual respect between the police and the public is key for lasting change.

Ferguson and Starkville Police Chief Mark Ballard have met periodically over the past several months to discuss ways to build this relationship.

Ballard told The Dispatch the best way to deal with suspicions and distrust about the department's policies and procedures is to meet them head-on.

"I always welcome the opportunity to be a transparent police department, and I think that's the key to trust," he said.

Chandler said religious and political beliefs should be the first gaps the community bridges within itself.

"You've got some people that are Muslim, some that are Christian, some that are Rastafarian, and that divides us, especially when you start putting it at the forefront," Chandler told the audience. "Let's not make this movement about religion. Let's make it about unity and love for your own people, your brothers and sisters."

Kamari Moore, who moved to Starkville from Noxapater last year, told The Dispatch she agreed with the message of unity and hopes it includes eliminating anti-LGBTQ sentiment within the Black community.

"In my personal opinion, I feel that Black homophobes are no better than the white nationalists who hate us," Moore said. "We're all fighting the same battle (as Black people), so I'd like them to address that."

Another source of contention within the Black community, Ferguson said, is the inability to accept constructive criticism that could redirect a young person who is on a path toward violence and legal trouble.

"Back in the day, you used to be able to tell somebody's child not to do this or not to do that, but now... their whole family's going to come and jump on you," Ferguson said.

Infighting and a lack of support for one another are why Black Americans are "losing the race war," he said.

"If we keep killing each other and keep going to jail, we ain't going to have nobody to fight with when it's time to fight," he said.

Haddix said Black people do need to stop infighting and come together as one, but the idea of everyone in the community having a gun is more difficult to swallow.

"I'm going to leave that to them because that's what they do," she said. "The NAACP preaches nonviolence all the way around, but we do have to work on our own communities. The Black Panthers' mission is different than the NAACP. They're more hands-on, but we're going to try to work together to come to some common ground."

Haddix said Hunt is correct that the protest strayed from a strictly pro-Black message in order to make people of all backgrounds feel welcome.

Stone said he stands by the protest as it happened because it "showed what we can be." The group that organized it, Starkville Stand Up, is "putting our heads down" and "committed to doing the work" for racial justice, he said.

He also emphasized he supports the organizers of Friday's events in their efforts to unite the Black community.

"It's going to take all of us, and we all may have particular parts to play, but I believe I've found my niche, and Starkville Stand Up has found their niche," Stone said.

'Do better as a whole'

Hunt and Ferguson both emphasized that they are simply against racism and police brutality and not against any groups of people. Ferguson also said Black people need to be their own closest allies.

"We have to do better as a whole," he said. "We can't just sit here and wait for somebody to come and help us. That's not going to happen. We've been doing this for 400-plus years, waiting on somebody to help us."

Chandler opened the floor for anyone who wished to express their own opinions, and Andrew Hines Jr. said he had hoped to see more people at the event.

Hines is 39 years old and spent 14 years in prison, and he said he is concerned that young Black people will follow their elders' examples and go to prison themselves unless they are guided in another direction.

Kim Hill, a mother of two and a lifelong Starkville resident, told the audience it is "never too late to come together."

"I know everyone's tired of losing someone to the streets, the people that we know," Hill said. "My own brother might shoot my cousin. We've got to stop all this and sit down and talk to the kids, talk to the parents, get together as one."

Tess Vrbin is the Starkville and Oktibbeha County reporter for The Dispatch. Reach her at 662-323-2424 or follow her on Twitter at @tess_m_vrbin.