Monday Profile: Teacher reflects on spending time with her daughter during pandemic 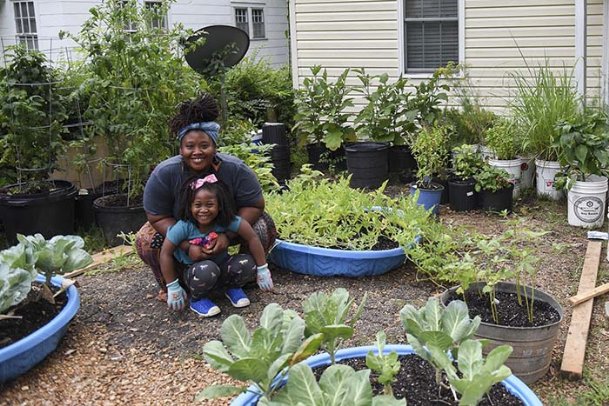 Omini Parks and her daughter, Gibson, 5, pose for a portrait in their garden outside their home in Starkville on Thursday. Parks started the vegetable garden as an educational activity over spring break. Photo by: Claire Hassler/Dispatch Staff 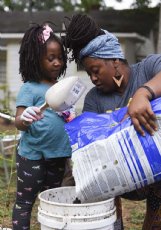 Omini Parks and her daughter Gibson, 5, prepare to repot tomatoes on Thursday outside their home in Starkville. Gardening is a fun activity for the two to do together âwhen Gibson listens!â Parks said.
Photo by: Claire Hassler/Dispatch Staff

The COVID-19 coronavirus pandemic changed a lot of things in Omini Parks' life, she said, but "in some ways it's been a godsend" for her and her 5-year-old daughter, Gibson.

Parks is a seventh-grade science teacher in the Starkville-Oktibbeha Consolidated School District. Teaching remotely while continuing to be Gibson's primary caretaker was "definitely an experience," but the past few months have been as refreshing as they have been anxiety-inducing, Parks said.

"Even though I still had teacher duties to keep up with, it gave me more time with (Gibson) to share some things with her that we both like," Parks said.

Those activities include baking, painting and taking care of the extensive fruit and vegetable garden in their driveway and front yard. The plants range from collard greens, cabbage, cauliflower, eggplant, blackberries, strawberries, eight kinds of tomatoes and several herbs.

The project has been a great source of entertainment and education for Gibson, Parks said.

"She's always asking about going out there to work in it and put on her little gardening gloves," she said. "She likes to be able to help pull the tomatoes off the vines and clip the eggplants. It's something to keep her busy, but it's also a good experience for her."

Parks hopes the garden "grows in abundance" so it can supply others in the community with fresh produce, she said. Giving back is especially appropriate since the garden began with Parks' friends giving her several five-gallon buckets to use as planters, she said.

"With the pandemic going on, I know people have been a little wary about produce in the grocery stores," she said. "Even if (the garden) only gives to a few people, that's still some people we were able to give to."

Helping and serving others goes beyond teaching and gardening for Parks. She joined the racial justice activist group, Starkville Stand Up, that formed in late May in response to a renewed nationwide outcry against systemic racism and police brutality against Black Americans.

Parks chaired the crowd safety and control committee while the group organized a protest in which thousands of people marched through downtown Starkville on June 6. She said her role was to make sure that all the participants were safe and would not create a "negative narrative" around the protest.

She said she believes Starkville Stand Up has a bright future and hopes more people get involved with it.

"We've been blessed with the eager hearts and hands that have come out, but the protest was just one leg of it and there's still work to be done," she said.

As for her regular work, Parks' job is moving from Armstrong Middle School (soon to be Armstrong Junior High) to the new Partnership School on the Mississippi State University campus. Gibson will start kindergarten at Sudduth Elementary School in August.

SOCSD has not yet announced a plan to reopen school buildings, so the extent to which Parks and her daughter might still be at home is still to be determined.

Teaching remotely invited Gibson into her mother's workplace, another positive and unexpected result of the pandemic, Parks said.

"Every time we had a meeting, whether it was with coworkers or when I had virtual meetings with my students, they all know her and she knows them, so she always wanted to make sure she said her hellos," Parks said.

Tess Vrbin is the Starkville and Oktibbeha County reporter for The Dispatch. Reach her at 662-323-2424 or follow her on Twitter at @tess_m_vrbin.