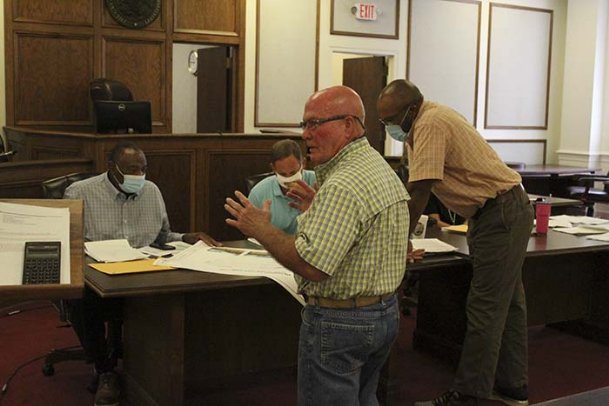 Oktibbeha County Engineer Clyde Pritchard, center, explains the need for a new emergency spillway at the county lake dam while Supervisors Joe Williams of District 5 (left), John Montgomery of District 1 and Orlando Trainer of District 2 read Pritchardâs blueprints for a new dam on Monday. The spillway is less than one-third the size it needs to be in order to be safe, and the side of the levee facing the lake has worn down by 24 percent, Pritchard said. Photo by: Tess Vrbin/Dispatch Staff

All visitors to Oktibbeha County-owned buildings, as well as churches and social gatherings outside the Starkville city limits, must wear protective face coverings in order to curb the spread of the COVID-19 coronavirus, the board of supervisors voted 5-0 at Monday's meeting.

Supervisors agreed that requiring masks is in the public's best interest as confirmed cases of the virus have been on the rise in the Golden Triangle and the state over the past few weeks.

On Sunday, 357 new cases and three new deaths were reported to Mississippi State Department of Health. Overall, there have been more than 31,257 confirmed cases and 1,114 deaths from the virus since the pandemic began.

Starkville aldermen will consider a similar ordinance at tonight's meeting for businesses and gatherings within the city limits.

The mask requirement went into effect this morning and will last until at least the supervisors' next meeting on July 20. District 1 Supervisor and Board President John Montgomery said the board will reconsider the ordinance at each subsequent meeting depending on public health data.

Montgomery told The Dispatch last week he did not see the need for a mask requirement outside county buildings, but District 2 Supervisor Orlando Trainer changed his mind during the meeting by suggesting a countywide ordinance.

"I wish we didn't have to employ any of this, but safety first," Montgomery said. "The customer comes in expecting a safe environment to shop in just as much as the business owner expects customers to come in and be safe as well, so I think it's a two-way street."

Businesses are required to have signs and door monitors at their entrances to make customers aware of the ordinance and to prevent people without masks from entering. Both customers and business owners who do not adhere to the rule will get a warning for a first offense, a fine of up to $500 for the second and up to $1,000 for the third.

County employees are required to wear masks too, and Chancery Court Clerk Sharon Livingston said the lack of door monitors at county buildings recently has accidentally allowed some people with COVID-19 to enter. She suggested placing bailiffs at the doors, but Sheriff Steve Gladney said they would be unlikely to take on another responsibility.

"They only make $55 per day, so if you stand them out there in front of this courthouse, I don't know if you're going to get anyone who wants to do that, especially at their age," Gladney said.

He also said it will be difficult to hold people who defy the mask requirement accountable, since they will most likely have left a business before deputies arrive if a business owner calls. He and the supervisors agreed that the responsibility for compliance and enforcement mainly falls on the owners and customers.

District 3 Supervisor Marvell Howard said he would support any efforts to prevent the spread of COVID-19 in line with Centers for Disease Control and Prevention recommendations, including wearing masks.

"It's incumbent on us as leaders to do everything we possibly can to protect the citizens," he said. "Sometimes I know it's aggravating to a citizen to have to wear a mask, but this is not all about that individual. This is about protecting other citizens."

The Oktibbeha County Lake Dam's structural issues now include the wearing down of the west side of the levee, to the point that 24 percent of it is gone, County Engineer Clyde Pritchard told the board.

Pritchard said in 2016 that the levee might need to be completely replaced after he found excessive slope failures on the same side of the levee, the side facing the lake. He told The Dispatch the new slides are not in the same place but just north of the repaired section from 2016.

Pritchard found a mudslide on the other side of the levee in January that posed a threat of breaching and flooding the surrounding area. The supervisors have since been debating whether to spend about $8 million on replacing the dam, which Pritchard says is the safest option.

If the board votes to replace the dam, construction crews can use dirt from within the existing dam to repair the west side of the levee, Pritchard told the board.

"Some of the material that's in the lake, we can probably use, and it's cheaper than going to Louisville or somewhere and getting better-quality dirt," he said.

Pritchard said he notified both the board of supervisors and the Mississippi Department of Environmental Quality of the new slides as soon as he found them, and he gave them an update Monday on the plans he has been drafting since March to replace the dam if the board allows it.

The plans include a new emergency spillway, since the existing one is less than one-third the size it needs to be in order to expel water quickly enough to keep the dam from overflowing in a hazardous rain event, he said.

He maintains his position that the county should authorize the replacement of the dam instead of more research to determine whether it's truly necessary, he said.

"It's hard for me to look the county in the eye and say we need to spend money to evaluate this when I can look at (the spillway) and see that it's cracked and busted and know I have to replace it anyway," Pritchard told The Dispatch.