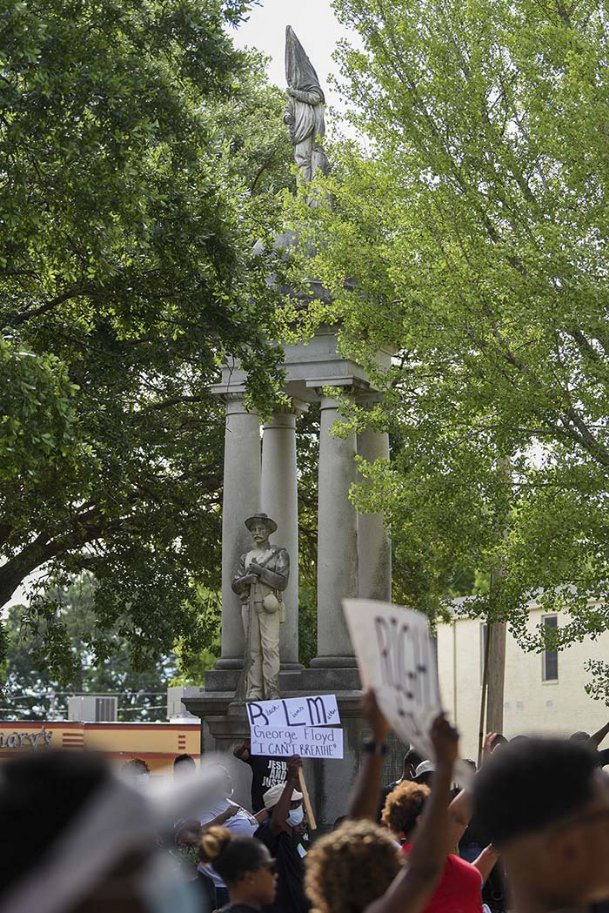 Protesters in June call for the removal of the Confederate monument in front of Lowndes County Courthouse. Though county supervisors originally voted to leave the monument in place, they voted unanimously on Monday to relocate it to Friendship Cemetery. Photo by: Claire Hassler/Dispatch File Photo

Ethel Stewart and Johnny Stewart chant during a protest demanding District 1 Supervisor Harry Sandersâ resignation on Monday outside the Lowndes County Courthouse. Ethel is on the Columbus City Council for Ward 1.
Photo by: Claire Hassler/Dispatch Staff

The Confederate Monument that has sat outside Lowndes County Courthouse for more than a century is moving to Friendship Cemetery.

Lowndes County supervisors voted unanimously Monday to relocate the monument to the cemetery where both Confederate and Union soldiers are buried. The vote came three weeks after supervisors voted 3-2 in June to leave it where it is.

During those weeks, Lowndes County witnessed multiple protests calling for an end to systemic racism against African Americans, which were partly spurred by District 1 Supervisor Harry Sanders' comments to a reporter that Black people had remained "dependent" in society since the end of slavery. Between the two votes on the Lowndes monument, the Legislature voted to remove the Mississippi flag, which for 126 years has included the Confederate battle emblem in its upper left corner.

Sanders, who made the racist comments while he was explaining his June vote to leave the monument in place, told The Dispatch Monday he now no longer has a problem with relocating it.

To move the monument in compliance with state law, Columbus will have to yield a piece of property at the city-owned cemetery to the county, the details of which are in the works, according to board of supervisors attorney Tim Hudson and city attorney Jeff Turnage.

Turnage told The Dispatch the city can either donate the land or sell it at a low price.

"The monument would then be relocated within the county to county-owned property," Turnage said. "That will just take the city out of the loop except for making the conveyance of the real property to the county."

Trip Hairston of District 2 and John Holliman of District 3 on Monday also changed their original votes on whether to relocate the monument, which was erected in 1912 to honor Confederate soldiers who fought for the South during the Civil War. The inscription describes the war as a "noble cause," and a stone statue of a soldier holding a flag in his left arm stands atop the statue.

Hairston, who moved to relocate the monument Monday, said his district residents have urged him to reconsider his June vote over the past two weeks, which he said changed his heart.

"Refusal of me to do otherwise, in my opinion, would not be representing the will of the majority of people in District 2," he said Monday.

State law prohibits the removal or relocation of war monuments on public property, Hairston pointed out during the meeting. Government bodies can move the monuments to a more "suitable" location, but the location has to be within the jurisdiction of the same governing body, Hairston said, quoting from two opinions from former Attorney General Jim Hood's office in 2017.

Columbus Mayor Robert Smith voiced his support June 16 for moving the monument to the cemetery and splitting the cost with the county.

Turnage said he and Smith have found a spot adjacent to the Civil War section of the cemetery, where they think would be a good fit for the monument. He said he is tasked with drafting up a deed of the parcel at Friendship Cemetery, which could be up for discussion at today's council meeting.

If the city agrees to turn over part of the property to the county, the two parties must present a detailed plan to the Mississippi Department of Archives and History for its final approval, MDAH trustee Nancy Carpenter told The Dispatch. She said she believes the department will approve the relocation quickly.

District 5 Supervisor Leroy Brooks told The Dispatch Monday he is glad the board has finally reached a consensus regarding the monument.

"I've heard complaints about that monument for years," he said, "so now (that) it's finally removed, all ... we have to do is get Harry to leave, and I think we can begin to get back in the middle of the road."

Holliman told The Dispatch Monday evening he changed his mind in hopes that the community can start healing after weeks of protests, many of which called for Sanders to resign from the board.

"I just feel like it would be best to go ahead and do it, and that's a good spot," he said. "I'm just trying to bring some peace and harmony back to the board."

District 4 Supervisor Jeff Smith could not be reached for comment by press time.

As protesters both inside and outside the courthouse cheered for the soon-to-come departure of the monument, their calls for Sanders to resign from the board also persisted.

Ward 4 Councilman Pierre Beard said he spearheaded a petition drive to gather signatures from District 1 voters to remove Sanders by law. Lowndes County NAACP President Lavonne Latham Harris and Columbus resident Jermaine Shanklin, both of whom are a part of the initiative, said they hope to gather 5,000 signatures within a week.

The governor has the authority to remove any elected officials who "knowingly or willfully" failed, neglected or refused to fulfill their duty in their official capacity. For the governor to consider a recall, or "removal" election, constituents who elected the official must launch a removal petition and gather signatures from at least 51 percent of registered voters in their district. In District 1, where there are 8,635 registered voters, the petition would need a minimum of 4,404 signatures.

The petition process can only begin after the official has served at least one year of his current term, meaning a petition for Sanders' removal can't be formally launched until after Jan. 1, 2021.

The community may have to wait months to kick-start the petition process, Beard said, but collecting 5,000 signatures from District 1 would send a strong message to Sanders. Those who wish to sign the petition can contact Jermaine Shanklin at 662-570-2397.

Speaking to a crowd of roughly 100 outside the courthouse, Columbus resident John Hampton also urged Sanders to step down for the community.

Jamal Wilson, lead pastor at St. Paul Missionary Baptist Church in Columbus, asked Sanders to step down from the board during the meeting on behalf of all the parishioners and pastors in the county. Wilson told The Dispatch he has reached out to roughly 100 pastors in the county and has received support from roughly 30 so far.

As the outcry for Sanders' removal continued, the standoff between board supervisors progressed.

Brooks, who replayed at the Monday meeting the audio recording of Sanders making the racist remarks June 15, urged him to resign and refused to sit at the table next to Sanders. Except for voting on the monument, Brooks abstained from every other vote to boycott Sanders' refusal to resign. Smith abstained with him.

Brooks, who moved for the meeting to adjourn last week and left an agenda full of items undiscussed, told The Dispatch he has yet to decide what he will do next.

"I think everybody needs to understand it's not going to be business as usual with Harry still sitting there," he said. "Whatever course of action I have to take to indicate my dissatisfaction, I'm going to do it."