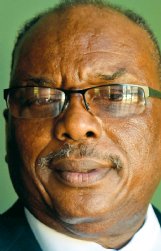 Mask requirements in the city of Columbus went into effect at 7 a.m. today and will remain in effect until further notice.

Columbus City Council passed a resolution mandating the masks in a 5-0 vote during a special call meeting Wednesday, in an effort to help curb the spread of COVID-19 coronavirus. Ward 2 Councilman Joseph Mickens was absent.

Patrons of the age of 6 and above will be required to wear masks in city-owned facilities, retail stores and other businesses such as restaurants, bars, gyms and fitness centers, except when they are eating, drinking or exercising. Similar age limits were also implemented in Starkville and West Point, said Mayor Robert Smith.

The requirements will remain in place until rescinded by the city or otherwise ordered to terminate by the governor, Smith said.

Signages requiring patrons to wear a mask and maintain a six-foot distance with others must be posted at the entrances of those establishments, according to the resolution.

The city will not require designated employees at those establishments to enforce the regulations, said City Attorney Jeff Turnage. But employees are encouraged to contact law enforcement, he said, if customers refuse to wear a mask or to abide by the social distancing rules.

Violations of the regulations could lead to a fine between $300 and $1,000, Smith said Tuesday night.