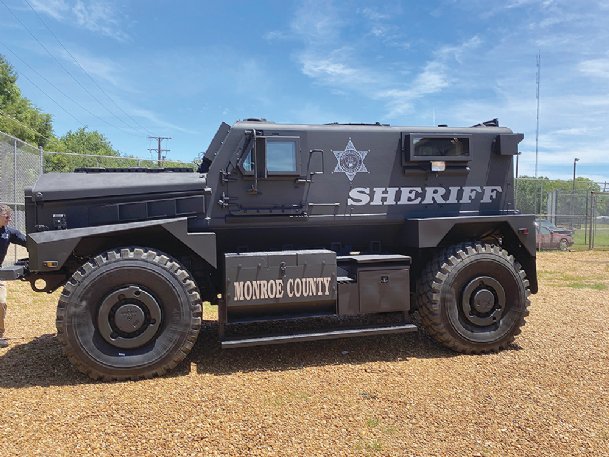 Monroe County purchased a Mine-Resistant Ambush Protected vehicle in June. The vehicle will be used in search and rescue efforts, missing person cases, extractions and circumstances where a suspect is barricaded. Photo by: Courtesy photo/Monroe County Sheriff Kevin Crook

Meanwhile, the Lowndes County Sheriff Office also may have its eyes set on a carrier of its own.

About three weeks ago, a Mine-Resistant Ambush Protected (MRAP) carrier was brought to the Monroe County to be used for search and rescue efforts after floods and storms, provide cover for the SWAT team in situations where suspects have barricaded themselves and potential hostage or active shooter situations.

Sheriff Kevin Crook said the vehicle has been deployed as recently as last week to pull out a trailer that was underwater. The MRAP, built for the U.S. Marine Corps, has the capability of operating in up to six feet of water.

"We've had tornadoes up here that have torn some towns apart and we have the ability to get in and out with this thing," Crook said.

The 1033 program essentially leases equipment rather than grant actual ownership, as the Department of Defense still technically owns the MRAP Monroe County is using. In Monroe County's case, the transfer fee was $10,000, which was paid for by private donations from community residents and corporations.

"We had plenty of support from the community and raised that money pretty easily," Monroe County Crook said. "We're blessed to have it."

Crook said he's explained to the public that the MRAP is primarily a defense-oriented vehicle and has no weapons. While he said feedback from community members has been "90-plus percent positive," he knows not everyone will approve of the department using a military-grade vehicle.

"It gets mixed reviews, especially in the current climate. ... If you're against our officers being as safe as they can be, well then, OK," Crook said.

"I think it's just an intimidating look ... we live in a day where we have to keep up with the bad guys and normally the bad guys have us outgunned by a long shot," he added. "This helps protect us. Two weekends ago, we had a shooting in Monroe County and the suspect used armor-piercing bullets and assault rifles. To pretend this stuff ain't out there, and there's no need for it, is burying heads in the sand."

When using the 1033 program, instituted in 1997 by the Clinton Administration, a state agency is responsible for paying a "transfer fee," which equates to 3- to 6-percent of the vehicle's total worth. In 2015, the Obama Administration limited what type of equipment police departments could purchase. According to The New York Times, The Pentagon said 126 tracked armored vehicles, 138 grenade launchers and 1,623 bayonets nationwide were returned since former President Barack Obama prohibited their transfer. But in 2017, President Donald Trump reversed those restrictions.

Around the Golden Triangle

That was put on hold because of the COVID-19 pandemic and Hawkins has not yet had a chance to present the request before the board.

Swan estimated the transfer fee of a MRAP for Lowndes County to also be $10,000, but noted the money would probably come from the department's budget.

How often the vehicle would be used in active shooter/suspect barricading situations varies.

"They're sporadic," Swan said. "Sometimes you have someone that barricades themselves inside of the house. Several times a year we've had to deal with those. Active shooter situations, those are something that you prepare for and hope never happens."

Most recently, authorities with LCSO responded to a situation where a man barricaded himself in a Jess Lyons Road residence for more than three hours during a standoff on May 7.

Not every law enforcement department in the Golden Triangle feels a need to acquire a military-grade vehicle, though.

In Clay County, Sheriff Eddie Scott said his department had discussed the purchase of an armored vehicle in the past, but ultimately passed on the opportunity.

"A couple years ago, we talked about it ... the cost and maintenance was too much for us," Scott said. "It's an added expense that I thought would be better going toward personnel."

Scott said he doesn't think the absence of an armored vehicle limits his department's enforcement potency.

"If it ever gets that bad, we're going to call the state anyway," Scott said, who added Clay County has a Special Response Team available if needed. "They could deploy (a armored vehicle) to us pretty quickly."

Capt. Brett Watson of the Oktibbeha County Sheriff's Office told The Dispatch he's unaware of his department ever being outfitted with military carriers, but said each deputy has a helmet in their vehicle for situations that arise. He added if his department needed a MRAP or a similar vehicle, it would likely reach out to the Mississippi Highway Patrol.

"We haven't been into a situation where we could not access something if needed," Watson said. "The highway patrol has assets that we would call upon if we needed something like that. So it's always been the decision of our department to utilize those resources."