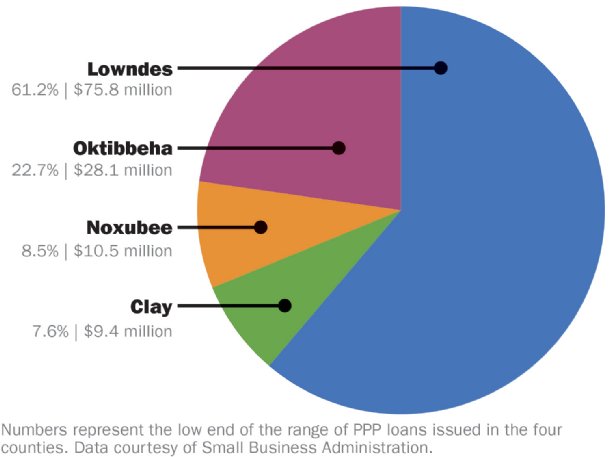 Roughly 2,000 small businesses in Lowndes, Oktibbeha, Clay and Noxubee counties were approved for more than $123 million in federal loans through the U.S. Small Business Administration's Paycheck Protection Program, according to an analysis of SBA data released Monday.

Based on the way the Small Business Administration characterized the data, the total of PPP loans given businesses in the four-county area could have totaled as much as $207 million.

The federal program is part of the Coronavirus Aid, Relief, and Economic Security Act passed by the U.S. Congress in March. PPP loans aim to help small businesses keep workers on their payroll during the COVID-19 crisis.

Any small business with 500 or fewer full-time employees are eligible to apply for the loans, which are forgivable and need not be paid back if the money is spent on payroll, rent, utilities and mortgage costs, although at least 60 percent of the amount of the loan must go toward payroll to meet those criteria. Initially, borrowers were given eight weeks to spend the funds they received in order for the loans to become forgivable, but the period was extended to 24 weeks on June 5.

Data released Monday show that 173 businesses in the four-county area received loans of $150,000 or greater. Of those, 97 were based in the city of Columbus, 47 in Starkville and 17 in West Point.

Glenn Machine Works, 4-County Electric, GTR Holdings and University Management Group (which operates as the Eat With Us Group) based in Columbus received funds in that range, as did Royal Trucking Company and Community Counseling Services in West Point and Noxubee General Hospital in Macon.

Thirteen businesses received loans of $1 million to $2 million. Fifty, including The Dispatch, were in the $350,000 to $1 million range (The Dispatch received $357,600 from the program). The remaining 103 that received more than $150,000 -- including Zachary's Restaurant, Galloway Chandler McKinney Insurance and First United Methodist Church in Columbus -- got less than $350,000.

Names of businesses receiving less than $150,000 from PPP were not released.

BankFirst President and CEO Moak Griffin noted that most of the bigger loans approved by BankFirst were on the smaller side of their respective ranges.

Nearly $3.2 billion was made in total loans to Mississippi businesses, according to the Mississippi Bankers Association on Wednesday.

The average loan amount in the state was $69,088, the lowest mark of any state in the country. Overall, $659 billion was available nationwide for the loan program. The average PPP loan in the U.S. was $107,000.