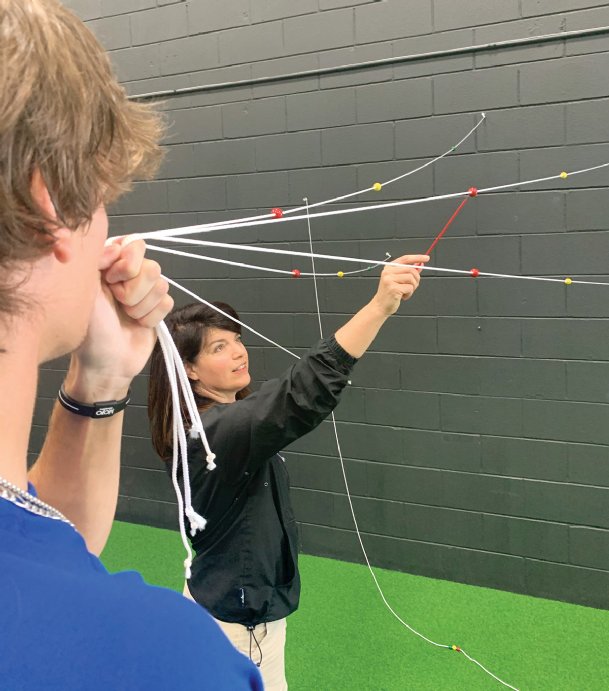 Angie Huskison works with Heritage Academy graduate and Pearl River Community College signee Banks Hyde using a Brock string at The Competitive Edge in Columbus. Huskison said the string can help determine if both eyes are working together at various distances and can help train the eyes to work together. Photo by: Courtesy photo/Angie Huskison

In the early 2000s, when Angie Huskison's brother underwent vision therapy at age 31, "it literally changed his life," Huskison said.

Since then, starting her own business was always in the back of Huskison's mind.

A vision therapist at the Columbus office of Snider Therapy Centers, Inc., with a background in fitness -- she taught aerobics and aquatics classes and worked as a personal trainer -- Huskison long sought a way to combine her two passions.

It wasn't easy, but eventually, she found the time, the space, the money and the equipment to get her long-awaited project off the ground. On June 12, The Competitive Edge, her new sports vision training facility located at 2322 Hwy. 45 N., Suite B, in Columbus, held its grand opening.

"It's kind of as if I've meshed the two fields of personal training/fitness and then vision training," Huskison said.

She spent two to three years searching for the perfect space for her new enterprise, finding it when Elite Team Sports vacated the building in front of Malco Theatres.

"This is exactly what I needed," Huskison said, praising the wide-open space that formerly held a batting cage, the high ceilings and the plentiful parking. "It's been wonderful."

In the first month of operation, it's been busy, too. Heritage Academy standouts KJ Smith, Jared Long and Banks Hyde are a few of the local athletes who have come in to train, but Huskison's clientele isn't so limited. She's seen a lot of pilots from Columbus Air Force Base tour the facility and check out the equipment and even hosted a girl from Canton interested in Huskison's services.

That's no surprise, Huskison said, as her new facility is unique in the region. After doing some research, she concluded that the nearest business to offer similar services is in Conway, Arkansas -- five hours away.

Huskison said what makes The Competitive Edge unique is its ability to train people -- not just athletes -- in a variety of areas including eye teaming, where the brain uses both eyes at the same time -- anticipation timing; eye-hand coordination; reaction time and peripheral vision. It's important, too; 80 percent of the information humans take in comes through the visual system, which she called "our dominant sense."

If athletes have issues with their footwork, timing or reaction time, it's often a product of their vision, Huskison said. Poor vision -- and poor luck -- can lead to concussions, which in turn can cause eye teaming issues, reduced peripheral vision and even visual midline shifts.

"Anytime you have those issues, that's just going to set you up for a possible second concussion just because you're not going to be able to react as quickly as you should," Huskison said.

Vision training, she said, can fix that. A study conducted from 2010 to 2014 with vision training for football players at the University of Cincinnati resulted in a reduction in concussions by more than 80 percent.

Not all athletes receive such training, but if they do, it's mostly in the college or professional ranks. To Huskison, anybody can use it.

Thanks to a grant from the Mississippi Department of Rehabilitation Services, Huskison has plenty of resources to do just that at her disposal at The Competitive Edge.

On a large square board called DynaVision, red lights appear on random buttons on a circular grid, and athletes must press them as quickly as possible. Huskison said the machine helps people learn how to correlate their central and peripheral vision, training the brain to process visual input in one's periphery more efficiently.

At another station, trainees don strobe goggles and attempt to bat away orange and white Ping-Pong balls fired at them from a machine. When the goggles come off, Huskison said, athletes will see the ball appearing larger and coming in more slowly.

And it's not just helpful for athletes. In addition to the CAFB pilots who frequent the facility, Huskison has used social media to promote training at The Competitive Edge to law enforcement and other professionals who rely heavily on visual processing.

She uses some of the same technology at the Snider clinic, where she sees a few families as needed, treating people who struggle in the classroom because of vision issues. Huskison employs a smaller version of the DynaVision machine, and though most patients struggle with it at first, many get better with time. Some have even come to The Competitive Edge after leaving the clinic and shown their prowess.

"They can still enhance and improve and even take it to the next level," Huskison said.